I know this rambles a bit, but I was on a roll. So please bear with me.

As the election cycle begins to move into its serious mode - Spend that money! Make those commercials! Move to the middle! Campaign! - we find the candidates, particularly those on the Democratic Party side, making the noises they expect the voters to interpret as religious conviction. Now is when they explain to us that they are people with Faith, believers in a Higher Power (which is not supposed to mean the Federal Government), and second to nobody in their appreciation of our Christian/Judaic foundation. The MSM will go out of its way to show us the spiritual side of the Democrats while exposing the Republicans as paleolithic savages with an outdated system of beliefs. 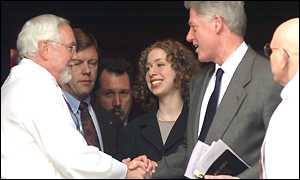 Was anyone really convinced of Bill Clinton's faith during his administration? Did he ever evince even the slightest regard for what the People might think of his behavior in the White House? Were we really expected by the MSM to buy into the image of Bill Clinton the faithful church-goer with the pictures of him leaving a church with a big Bible in his hand? Do we honestly respect him for turning every church visit into a political rally?

Now we are being told that Barack Obama is a man of Faith and are being inundated with his tepid pronouncements on Christianity - along with his tepid pronouncements on patriotism. And with each new revelation of this candidate's beliefs and this candidate's church membership we are shown, once more, the MSM's and the Democrat Leadership's barren understanding of Christianity. Their understanding of Judaism is similarly bereft of understanding. How is it possible that in the early years of the 21st Century we can have a media so shallow and so unable to seek knowledge that they do not know what the Bible says? That they do not know much of anything of the history of the Hebrews? That the trials and suffering of the early Christians is a matter of little importance or meaning?

The Left - by which I mean the MSM, the Democrat Party, and all the hangers-on - has one aim which is the acquisition of power. Anything that may dilute that goal is anathema to them. Thus they cannot understand or even empathize with Faithers, despite their attempts to be "religious" to the voters whom they seek to fool.

The United States House of Representatives can issue a proclamation to mark the commencement of the Islamic Holiday of Ramadan, but it does not make any similar proclamations to mark the observance of Yom Kippur, Easter, Rosh Hoshanah, or Christmas. What is it about the religions of Christianity and Judaism that is so distasteful to these people that they cannot publicly support its holidays and must pretend to be practicing members of those faiths (like Hillary pretending to be a NY Yankees fan) to garner votes?

One problem is that little dilemma of "tolerance". Non-believers think that Christians and Jews must be tolerant. After all, isn't that what the Bible says? No. It says nothing of the kind. Not for Jews. Not for Christians. Tolerance is not a Christian or Jewish tenet. Nowhere in the Old Testament will you find an iota of tolerance for beliefs or behavior that gainsaid the Word of GOD. What you will find is a very long list of Hebrew and Israelite wars on those who were not following the Word of GOD. There was a very strong charge to be kind to strangers. The implication being that one never knew when one might be host to an Angel. But to "accept" and honor alien beliefs was not a way honored by the Hebrew people. It is, however, something we Americans have been doing, without Governmental orders, commands, or laws, for most of our history.

Search the New Testament, if you will. You won't find any commandments by Christ to be tolerant. He was not tolerant. Notice when He heals He usually admonishes the formerly ill person to "go, and sin no more," ascribing the illness to sin rather than anything else. Not that He did not understand germs, bacteria, etc. But He was not being "tolerant". The New Testament shows no tolerance. None of the Church "Fathers is tolerant. James is even intolerant of those who were not Jews, demanding that they be circumcised. Paul's intolerance was monumental, though he was also monumentally forgiving and loving. But when his words were rejected by any city, he "shook off the dust of that place" and went his way. Christian evangelists routinely denounced the pagan practices of the people they attempted to convert. Nowhere do they show "tolerance" in the way the Left would have today's Christians show it.

Tolerance is a code word. The Democrats love them as they allow the unthinking to simply plug in a simple word and feel superior to all. But tolerance is not something they show to Christians or Jews. They have no tolerance for anything that demands of its followers a moral code that is less than hedonistic.

GOD demands some things of us, whom HE created. HE doesn't give us leeway. HE doesn't say, "Well, just say the words, or toss a few pennies," and you have a free pass. HE demands obedience. Period. HE is not tolerant. Again, search your Bible for any mention of HIS tolerance. You won't find it. There are places where HE discusses HIS choices with HIS people. But HE does so, not to be tolerant, but to teach. In the end HE does what HE will. And HE still demands our obedience. And the Left despises that.

So they demand that Christians and Jews be perfect! Sadly some of the religious leaders ask that of their congregants, too. But that is not our nature nor our lot in life. Christians and Jews recognize that and are not fooled by posturing fools who demand our perfection before we can speak out against their foolishness.

They denounce us for being intolerant, while they tear down the defenses of our nation and our culture. They call us bigots for believing that GOD spoke to us and has rules (which we cannot follow because we are imperfect mortals) while they treat us with hatred and violence. And they parade around the country with their lapdog press, pretending they are believers while showing no evidence of that belief. Some can debate religion without any Faith, which is not terribly hard for an intelligent person. And at the end they believe they have "won" the debate because their debating skills are well-honed.

And they want you and I to vote for them because they are just like us, though smarter, and will do what is best for us, because we aren't bright enough to know what's best. And they will feign their religious heritage while understanding none of it.

Remember that the next time one of these Leftists tells you how moral and religious they are while their opponent is out of touch. Our Faith may be based on millennia old words, but they are words inspired ("breathed" in the original) by our Creator, and they are timeless and eternal. They will not change simply because our tastes change or our leaders change. So don't be fooled.
Posted by benning at 9:07 PM

Our Faith may be based on millennia old words, but they are words inspired ("breathed" in the original) by our Creator...amen amen amen Benning!!!

Camo: you are so right! This sort of pandering is repugnant.

Patrick: I suppose we should always beware of politicians. Always!

That's true, Bro. The Bible calls us to be, not judges, but fruit inspectors. So we need to carefully examine the fruit of even so-called Republican politicians to see what they have borne and are bearing in their lives and actions.

"By their fruits you shall know them ..."

Or, to paraphrase, "It isn't what goes in the mouth that defiles the spirit, but what comes out of the mouth."

Yes, Big Sis, we know the frauds by the fruit of their endeavors and the things they have said before, and continue to say. Thus, their positions, outside of the election cycles, tells us what the candidates actually stand for.

Glad you visited, Big Sis! Hope you come back again!