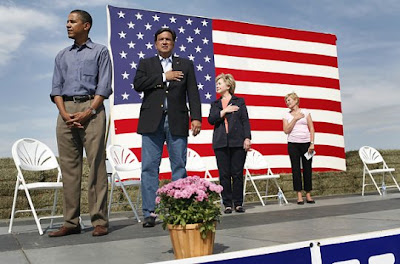 What's Barack Obama doing? The National Anthem is playing, or about to play, and he's staring off into space, covering his biscuits? Can you get any more Politically Tone-deaf than this? I'm not even saying this is intentional - that he's making yet another 'statement' of principle like his silly refusal to wear an American flag lapel-pin - but is he aware he's on a stage? That he's seeking to become a Nation's Leader? And this is how he leads at a simple campaign appearance?

"Look at the grouse!"

As Brooke said, "For pity's sake, even Hillary can get this stuff right, and she's a dyed-in-the-wool commie!"

No wonder the Daily Kos has him languishing in third place on their poll. If you lose the Lunatic Left you can't win as a Democrat, Obama. Better get your grouse in a row.

Right now, Hillary is going to be the Dem nominee. Even Hillary won't choose Barack Obama as a running-mate. Probably she won't choose Silky Phony Edwards either. Expect her to choose Bill Richardson. He's not a pretty face by any stretch of the imagination and may make Clinton look pretty by comparison.

Also found at Brooke's blog was this. I post it here for my Li'l Bro - he has those two cats, Lucy & Ethel - because he probaby gets this quite often!

Thanks for the link!

Camo, are you a Browncoat?

A "Browncoat" is a fan of a really fantastic western/sci-fi blend show called Firefly. In the fine Fox tradition of killing good shows, it was cancelled after one season.

Watch it on video if you get the chance; you won't be sorry!

Anyway, "shiny" is one of the slang terms used by the crew to describe something neat.