At the gas station nearest to my apartment - between home and work, that is - the advertised price of a gallon of gas is $2.81/gallon. Looks high, and sounds high, to me. But though it may seem like it's getting awfully pricey to buy gasoline, is it really? Or is it just a mirage, an inflation-heightened price?

Fact is, adjusted for inflation, compared with the price at the pump for gasoline in 1988 dollars, the price is $1.88. Not so bad, looked at that way, is it? Now compare it to the price it would have been in 1973 dollars, the price for a gallon of gasoline would be $.60/gallon. Sound better? And that's simply the price you pay, everything included. That means all those taxes hidden in the price.

The average tax load added to the price of a gallon of gas in the US is about 46.9 cents. That's in July, 2007 prices, by the way. Here in Florida the taxes you pay for each gallon of gasoline depends on the county and even the city where you purchase the fuel (the average tax bite is 51 cents/gallon, while Patrick - in Oregon - is paying an average of 54.4 cents per gallon). Just subtract the taxes from the total and you have a slightly lower price/gallon of gas. Adjust that price for inflation - remember that prices are not static, unless you live in a Socialist fantasy world - and you have a better idea of what you are really paying for gas. The price you see is a bit of an illusion. (Find your own state's tax bite on gasoline here!) 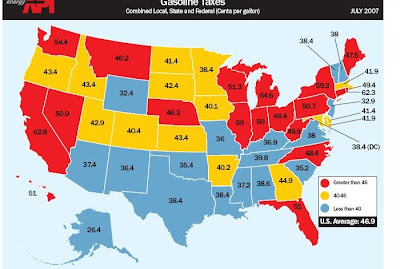 Now I've seen some try to compare it with beer and wine prices. And that's all well and good, but my car doesn't run on beer or wine, and I don't drink nearly as much of those comestibles as I use gasoline. So the analogy is false. For instance, I bought a six-pack of Leinenkugel's Berry Weiss beer on October 10 for $8.19 (plus tax), and enjoyed it for a week. Actually I had a bottle a day. 72 ounces of a very nice beer, compared with gas usage comes to about 2 1/4 quarts of "fuel". That 2 1/4 quarts of beer cost me about $.11/ounce or $14.56/gallon of very nice beer. Now I think it was worth it - it was my birthday, after all - but it isn't really analogous is it? In 1988 prices it would have cost me $8.26 for that six-pack. I would never have paid that in 1988 for a six of beer. Yet I paid it this year. Hmmm ...

But I think you get the idea. The price of gas can't really be compared to other consumables, principally because we use it in different quantities than beer, wine, cheese, or even crackers! Fact is we are paying a pretty low price for our gasoline. We may grumble that the prices are way too high, but then the cost to refine and ship the fuel to the gas station is higher than it was, too. As is the cost of drilling for that crude oil.

What might lower the prices? More refineries. The US hasn't has a new refinery built since the 1970s. Not one. If ABFreedom is correct, South Dakota may well be on its way to building a brand-new refinery. And that's great news! Long as the Environazis don't kill the effort, we may see slightly lower prices for gas. And perhaps we'll see a few more oil refineries planned and built in the US. About bloody time! If you want to know why the gas prices are so high, and the supply seems so iffy, just bear in mind that there are more cars and trucks on the road today then there were in the 1970s, with no way to refine more oil into gasoline, here at home. It ain't the greedy oil companies that are at fault, friends, it's the lack of oil refineries. You can blame the spineless elected officials who allow themselves to be brow-beaten by the Environazis, and you can blame the Environazis. And you can also blame the short-sighted, selfish idiots who support NIMBY. Not In My Back Yard!

Remember, you aren't paying record-high prices for gas. That's what the MSM would have you believe, but they are, as usual, wrong.
Posted by benning at 3:40 PM

You're right but I still wish it was cheaper.

Hey, I'm with you. Even knowing that the price isn't really that high I hate seeing those prices on the marquees. Gimme some $1.00 gallons, dadgummit!

The comparison I like best is with bottled water...which costs way more per gallon, when you do the math.

Thanks benning ... the prices would be sooooo much cheaper if we didn't have soooo much government interference, but it's a socialist world with larger shovels feeding the big government machine.

Bob: I was surprised to find it. Amazing what turns up on the 'Net, isn't it?

Yep, the cheapest gas in my town is $3.07 but that's still cheaper than what my sister pays in South Africa where it's close to $5.

Have fun with your National Novel Writing Month. I'm going to take one day a week to write instead of blog. There's a big difference. Writing is lonesome compared with blogging.

Enjoy it, Patrick. Maybe lonesome, but it can be rewarding, too.