"I once poked a badger with a spoon"
~ Pedro Gonzales 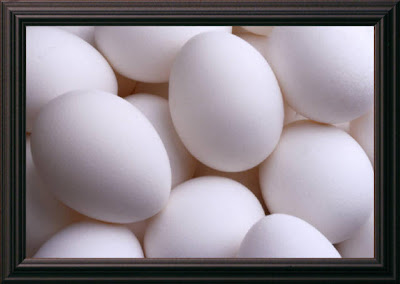 I enjoy hard-boiled eggs. I like egg-salad (which for me consists solely of chopped hard-boiled eggs, mayo, and pepper. No onions, relish, celery, or anything else!), and sliced egg sandwiches. And I like to just eat a hard-boiled egg all by its lonesome. But I hate peeling the suckers! I don't know how many times I've ended up smashing an egg into the sink disposal in frustration at the shell peeling away the egg. Peeling a hard-boiled egg is not rocket science, and I have tried a few things to solve the problem. They have rarely worked, and I've been reduced to ignoring hard-boiled eggs. Why go through all that? 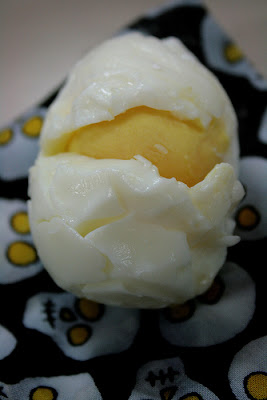 One tip was to poke a little hole in the fat end of the egg before boiling it. The theory is that the boiling water slips between the egg and the shell and releases it. Okay, I tried that, but it doesn't always work. So that's a crap shoot.

One theory recommended a cold water start. Put the eggs in cold water and bring to a hard boil. Nope

Drop them in boiling water? Good way to watch eggs explode, but that doesn't solve the peeling problem.

Cool the eggs in ice water? Nope. No, none of those worked, and the three-day old egg theory never worked for me.

My grandpop would crack the cooled egg and hold it to his mouth and blow into the shell. Sorry, but no, that doesn't always work either.

So what's the answer?

It seems that egg cartons have some interesting numbers on their ends. The "Sell By" date is the one we're most familiar with. But there are other numbers there, too. What do they mean? Are they useful?

Recently I hard-boiled a dozen eggs, using the codes on the carton as my guide. Not one gave me trouble with peeling off the shell. Not one! That is a first! How did I manage it? 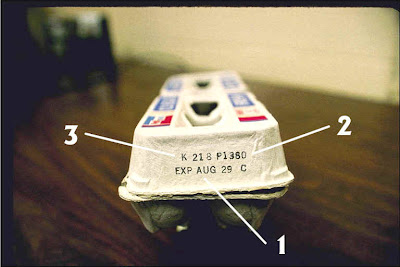 Cartons that have the USDA grade shield are marked to identify the company and location where the eggs were packed, and the date that the eggs were washed, graded, and placed into the cartons. In addition, most packers also provide consumers with a code date, which indicates the last date the eggs should be sold at retail, or used by the consumer.

Straightforward enough. But what do the codes mean?

CODE DATES:
Egg processors typically print dates commonly called "Code Dates" on cartons for purposes of rotating stock or controlling inventory. "EXP", "Sell By", "Best if Used Before" are examples of terminology used for code dating. Use of code dates on USDA graded eggs is optional, however, if they are used, certain rules must be followed.

If an expiration date is used, it must be printed in month/day format and preceded by the appropriate prefix. "EXP", "Sell By", "Not to be sold after the date at the end of the carton" are examples of expiration dates. Expiration dates can be no more than 30 days from the day the eggs were packed into the carton.

Another type of code dating used indicates the recommended maximum length of time that the consumer can expect eggs to maintain their quality when stored under ideal conditions. Terminology such as "Use by", Use before", "Best before" indicates a period that the eggs should be consumed before overall quality diminishes. Code dating using these terms may not exceed 45 days including the day the eggs were packed into the carton.

That's useful. Nobody wants to crack open a rotten egg. And nobody wants to get poisoned if they can' smell the old egg. But the other numbers? What about them? Well there's the Plant Number, that tells you where the eggs were packed into the cartons. Those numbers begin with the letter "P". If you care about that, now you know!

Now here's the payoff information about the codes:

PACK DATE:
The day of the year that the eggs are processed and placed into the carton must also be shown on each carton with the USDA grade shield. The number is a three-digit code that represents the consecutive day of the year. For example, January 1 is shown as "001" and December 31 as "365." Typically, eggs are packed within 1 to 7 days of being laid. The pack date in this example is "218", meaning that the eggs were packed on the 218th day of the year, or in this example, August 5. If your carton shows a USDA grade shield, you can determine the date that the eggs were packed from the carton date code.

Ah-HAH! And just how do you use that information? Well, that's what I'm going to tell you.

How did I get that carton of eggs to hard-boil properly without the dreaded peeling problem? I let those eggs hit the fourteen-day mark (14 days), which was recommended to me. Not 14 days after the "Sell By" or "Expiration" dates. No. Fourteen days after they were processed. And it's actually easy to figure out.

There are 365 days in a year. The first day of the year is 1, or 001. The last day of the year is 365. Look at the processing number on your carton of eggs. Add 14 to it. Then figure out which day that is. That's the day when it's perfect to boil those eggs for an easy peel!

Confused? Okay, this is October 11, the 284th day of the year. If I have a carton of eggs with 284 as the processing number then I won't hard-boil them until I get to day 298, which is October 25. We're talking about some mathematical egg boiling here. Of course you can do the same thing by writing the date two weeks hence on the carton. The math is easy, really. Even for me. Buy eggs, figure out the date in two weeks and scribble that on the carton. Now I know when I can boil those suckers and not have a war with the danged shells.

Yeah, I'm making a big thing of this, but I hate wrestling with egg shells. It makes me feel idiotic, and ruins my calm disposition.

Tip: Choose a push pin to use to make a small hole in the fat end of the egg before hard-boiling it. Keep the pin in your silver-ware drawer. The theory is that this also allows the gasses to escape the egg while it boils without cracking the shell. I do it. It doesn't seem to help the peeling process, but I have danged few cracked eggs in the pot.

Turning off the burner and allowing your hard-boiled eggs to slowly cool is fine, I guess. But if you want to eliminate the "greening" of the yolk, put the eggs in a pot of cold water with ice cubes. A quick cool down. It's supposed to eliminate the sulphur taste, too. So, egg-boiling tips galore! Wheeeeee!
Posted by benning at 11:06 AM

LOL! I would say you will now be able to boil eggs without suffering the dreaded peeling problem, Benning.

The truth is though, that I don't have that problem. I place the eggs into the pot first and then fill it with cold water and one tablespoon of vinigar. It works for me every time.

Didja think to bring some bread?

I've never had a problem with this.

I always heard that salt should be added to the mix to help peeling.

I too like the egg salad without the crunchy stuff in it. I am more of a texture person when it comes to food...

Great Posting!!! I love eggs... though I don't eat them as often for the fear of "over cholesterol syndrome" Ha!

My favorite Egg sandwich is fried eggs with the yolk half-hard,... a a pinch of salt, butter on each side of the bread, and a slice of pepper jack cheese over the yolk of the egg. There is nothing better... :-)

That's very interesting, I had no idea.

I shouldn't have read this before breakfast. Now I'm craving a hardboiled egg.

No, Benning, the vinegar doesn't flavor the eggs. Maybe if one of them is cracked, but I've had that happen too, and still never noticed a taste of vinegar.

Try it. It's a lot easier than going to all this trouble. I've cooked in restaurants and they use this trick. :)