On The High Seas

I get email, Folks! And most of it ain't SPAM but missives of odd things from a co-worker at Wal-Mart. Some of it is just too cute *bleahh!* and some of it is good for a laugh or a chuckle. And now and then she finds or receives something worth a good look. And here is one. This isn't actually new news, but it's a reminder of good things, sad things, and American resolve.

Here SHE is! As you scroll down, notice the two twin towers on top. 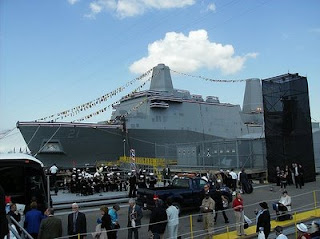 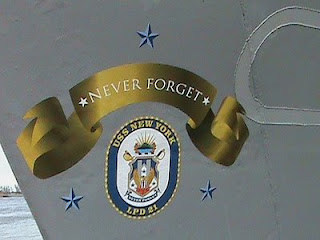 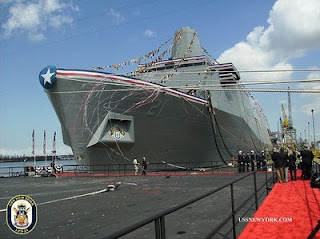 Here SHE is, the USS New York, made from the World Trade Center! 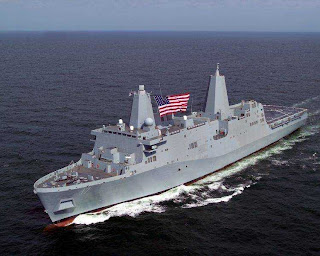 She was built with 24 tons of scrap steel from the World Trade Center ....

It is the fifth in a new class of warship - designed for missions that include special operations against terrorists. It will carry a crew of 360 sailors and 700 combat-ready Marines to be delivered ashore by helicopters and assault craft.

Steel from the World Trade Center was melted down in a foundry in Amite, LA to cast the ship's bow section. When it was poured into the molds on Sept 9, 2003, 'those big rough steelworkers treated it with total reverence,' recalled Navy Capt. Kevin Wensing, who was there. 'It was a spiritual moment for everybody there.'

Junior Chavers, foundry operations manager, said that when the trade center steel first arrived, he touched it with his hand and the 'hair on my neck stood up.' 'It had a big meaning to it for all of us,' he said. 'They knocked us down. They can't keep us down. We're going to be back.'

Commissioning is the act or ceremony of placing a ship in active service. The term is most commonly applied to the placing of a warship in active duty with its country's military forces. The ceremonies involved are often rooted in centuries old naval tradition.

Ship naming and launching endow a ship hull with her identity, but many milestones remain before she is completed and considered ready to be designated a commissioned ship. The engineering plant, weapon and electronic systems, galley, and multitudinous other equipment required to transform the new hull into an operating and habitable warship are installed and tested. The prospective commanding officer, ship's officers, the petty officers, and seamen who will form the crew report for training and intensive familiarization with their new ship.

Prior to commissioning, the new ship undergoes sea trials to identify any deficiencies needing correction. The preparation and readiness time between christening-launching and commissioning may be as much as three years for a nuclear-powered aircraft carrier to as brief as twenty days for a World War II landing ship. The USS Monitor, of American Civil War fame, was commissioned less than three weeks after launch.

The New York is not a Battleship, a Cruiser, a Destroyer. She's what is called a San Antonio-class amphibious transport dock.

Get them in, complete the mission, get them out. I like it! How 'bout you? Think we could use about 50 of these new ships?

Annnnnd ... keeping the thread of the Seas alive, here, does anybody else wonder a) why ships sailing near Somalia, indeed the East African Coast, are not being armed, and b) how long before Barry "O" demands negotiations rather than simply blow the scurvy pirates straight to Hell? 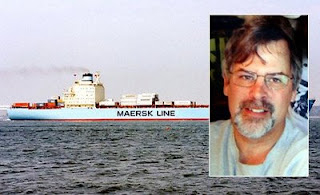 The Maersk Alabama, carrying "emergency food" to Kenya, was boarded by Pirates, as I'm sure you already know. Although the crew of the Alabama retook the ship, the captain was taken hostage by the pirates. You may not realize that this was the first American-flagged vessel to be taken. The Seas are too massive to provide Naval escorts for every ship plying the routes along the coast. Ship Owners take the risk of losing their ships, but the sailors are the ones who risk their very lives. So why aren't these ships armed to the teeth? And if not armed, why aren't the owners required to be aboard during the runs down the East African Coast?

From the NY Daily News:

Retired U.S. Ambassador Robert Oakley, who was special envoy to Somalia in the 1990s, said U.S. special operations forces have drawn up detailed plans to attack piracy groups where they live on land, but are awaiting orders from the Obama national security team.

"Our special operations people have been itching to clean them up. So far, no one has let them," Oakley told the Daily News. 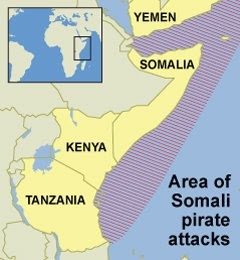 The ship had been bound for Mombasa, Kenya, carrying a cargo of emergency food when it came within 300 miles of Somalia's coastline. It is one of at least 50 ships to have been attacked by Somali-based pirates in the past three months. But it is the first U.S.-flagged vessel to have been hijacked in years, and perhaps decades.

Why has Somalia become the 21st-century version of the 17th-century West Indies? The usual answer is that it's a failed state, unhappily situated near a major shipping lane where all kinds of criminality can thrive.

In fact, piracy is making a comeback because the world has largely allowed it. The owners of captured vessels have been willing to pay multimillion dollar ransoms to recover the ships, 16 of which and 200 crew members are currently in pirate hands. Restrictive or ambiguous rules of engagement -- a bequest of the Law of the Sea Treaty -- create further difficulties for navies trying to prevent piracy. Western states have also been wary of trying captured pirates in their own courts, choosing instead to remand them to Kenya's jurisdiction.

Yeah, that seems to have worked well. And how has the "O" responded? After all he has been asked about this, and there are American lives at stake. Not Community Organizers, mind you, but still. And how does the best danged President in the History of the World respond?

WASHINGTON, April 9 (Reuters) - U.S. President Barack Obama declined to answer reporters' questions on Thursday on a hostage crisis off the coast of Somalia, where a U.S. ship captain is being held captive by pirates.

Obama was asked to comment on the situation several times by reporters at a White House event on refinancing for homeowners. Obama, however, stuck closely to the script and replied that he wanted to remain focused on housing.
(Reporting by Jeff Mason, Editing by Sandra Maler)

Yeah, we don't want to get off-message, do we? After all the "O" is fixing a mess created over thousands of years of Republican mis-rule. (Ever notice how Leftists like the word 'rule' rather than 'lead' or anything else?) And he's doing so well, isn't he, dredging up all the failed policies of past generations, trying to put into place insane acts that will further cripple or destroy the US economy, and just generally so busy fouling things up he can hardly be expected to do two things at once, now can he?

Again, from the WSJ article:

We don't advocate reverting to Roman methods (e.g., crucifixion) for dealing with pirates, though the Administration could apply the Stephen Decatur standard by bombing the Somali pirate city of Eyl. U.S. law is clear that pirates who attack U.S. flag ships deserve life in prison. But treating captured pirates as enemy combatants unworthy of Geneva Convention protections would help in cases where pirates attack foreign-flagged ships and international law is now more ambiguous.

A similar attitude might guide the Obama Administration in its dealings with other states that have, or seek, to take Americans captives. North Korea seized two American journalists, Euna Lee and Laura Ling, last month on the Chinese border and says it intends to put them on trial for "espionage." Iran also uses hostage-taking as an instrument of state policy, including the British sailors seized in Iraqi waters in 2007, American academic Haleh Esfandiari the same year and, most recently, American journalist Roxana Saberi, whom the Iranians also accuse of espionage and who is now being held in Tehran's notorious Evin prison.


Then again, why look so far afield? As we wrote yesterday, a Spanish judge may soon order arrest warrants for six Bush Administration officials on dubious charges under the preposterous theory of "universal jurisdiction." So far, however, the Obama Administration hasn't spoken a word in their defense. If the U.S. government won't protect American citizens from the legal anarchy of postmodern Europe, how can we expect it to protect American sailors from the premodern anarchy of Somalia, much less the tyrannies of Tehran and Pyongyang?

Kim Priestap has a word to say on Obama's silence. Please read it. Read all the linked posts and articles. 2010 is close. We may survive until then. There's no time to lose if we don't want to become a Third World Country.

Note: As I mentioned after last Thanksgiving, here,

"Why the heck aren't all ships, plying the seas off Somalia, armed? Why aren't we blowing those murderous Pirates to Kingdom Come? The companies insuring those vessels should demand they be armed and sailors be trained in use of those arms or refuse to insure the vessels. The naval forces 'protecting' that shipping lane, and any others in the world pestered by Pirates, should stop trying to capture them and simply annihilate them. Any pirates captured should be hanged. Immediately. Or keel-hauled. Or simply shot and tossed over-board. It's not a criminal justice issue, folks, it's a war on the High Seas. Time to bring down the hammer."

Nahhh, let's just negotiate with the High Seas Terrorists. Sheesh!
Posted by benning at 7:55 AM 5 comments: