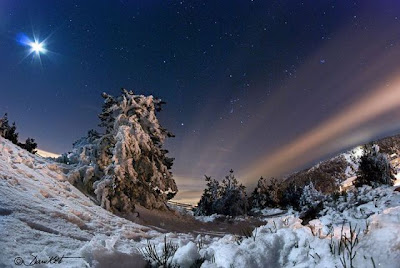 Most of the dating of events, in the New Testament, save for those we now know from archaeology and concurrent events, are open to interpretation. Such, for instance, is the dating of the Birth of Jesus. Though we Christians tend to place the birth at the year Zero - which does not exist, really - the Christ could have been born as early as 4 B.C, according to our calendar. Placing the celebration of His birth in December, though, is incorrect. Christians who complain about non-believers equating the Mass of Christ (Christmas) with the pagan festival of the Saturnalia, are being disingenuous, or ignorant.


The fact is that nearly all Christian celebrations and festivals are ‘pasted’ on to pagan festival dates. The early Christian Church, being empowered in Rome, simply used the Roman tradition of subsuming older religious celebrations for their own. This does not change the nature or focus of the Christian observance. But it does tend to make it difficult for folks to nail down correct dates. Thus, if we depend on the old Roman Catholic Feast days for our dating of events, in the New testament, we can’t reliably date those events we celebrate at all.


For instance we know that, according to New Testament Scripture, John the Baptist - a cousin of Jesus - was born six months before the birth of Christ. The Roman Catholic Church sets aside June 24th as John’s feast day, the celebration of John’s birth. This was done to square his birth, according to Scripture, with that of his cousin’s six months later. Since the Catholic Church set the date of Christ’s birth on December 25th, John’s must have come around June 24th. Simple, right? Also wrong.


Why was December 25th chosen? Well, not because that was the correct date. Instead it was convenient as a way to pull in pagans, who celebrated the Saturnalia for the week before that date. The Romans found, during the days of Empire-building, that it was easier to subdue the conquered populace, not by importing Roman religious traditions into the conquered territory, but to simply adjust their own festivals - in essence to graft the celebrations of the conquered into their own. Saturnalia, too, was drawn from earlier pagan rituals predating the Roman Empire.
The Saturnalia was a week-long celebration of merriment, including gift-giving. Wikipedia describes the Saturnalia thus:

“1. Saturnalia was introduced around 217 BCE to raise citizen morale after a crushing military defeat at the hands of the Carthaginians. Originally celebrated for a day, on December 17, its popularity saw it grow until it became a week-long extravaganza, ending on the 23rd. Efforts to shorten the celebration were unsuccessful. Augustus tried to reduce it to three days, and Caligula to five. These attempts caused uproar and massive revolts among the Roman citizens.


2. Saturnalia involved the conventional sacrifices, a couch (lectisternium) set out in front of the temple of Saturn and the untying of the ropes that bound the statue of Saturn during the rest of the year. A Saturnalicius princeps was elected master of ceremonies for the proceedings. Besides the public rites there were a series of holidays and customs celebrated privately. The celebrations included a school holiday, the making and giving of small presents (saturnalia et sigillaricia) and a special market (sigillaria). Gambling was allowed for all, even slaves.


3. Saturnalia was a time to eat, drink, and be merry. The toga was not worn, but rather the synthesis, i.e. colorful, informal "dinner clothes"; and the pileus (freedman's hat) was worn by everyone. Slaves were exempt from punishment, and treated their masters with (a pretense of) disrespect. The slaves celebrated a banquet: before, with, or served by the masters. Yet the reversal of the social order was mostly superficial; the banquet, for example, would often be prepared by the slaves, and they would prepare their masters' dinner as well. It was license within careful boundaries; it reversed the social order without subverting it.”

Familiar, eh? This pagan feast was simply used by the early Roman Church. Much as the Romans had used other feasts and festivals. But it has nothing to do with the birth of Christ, so far as the actual date is concerned. It was as much a political decision as a religious one.


So when was Christ born (and I don’t mean the year)? Well, if we go back to the New Testament there is evidence that clearly points to a time of year that would fit the dating far better. And it points to the Feast of the Tabernacles.

“And the Word became flesh and dwelt among us, and we beheld His glory, the glory as of the only begotten of the Father, full of grace and truth.”

That word ‘dwelt’ is an English word that feels good to read, but is not what the original said. In the original it would have said ‘tabernacled’, which is to say, He set his tent among his kin-folk. Which has a far deeper meaning to us.


For one thing Christ was coming to live with his relatives. Not simply Mankind, but his own, actual blood-kin. Why is this important? Because according to the Law of Moses only a kinsman could redeem us. From Abide In Christ, we read:

“The "nearest kinsman" or "kinsman redeemer" is a Goel. The word means to redeem, receive or buy back.


Provision was made in the Law of Moses for the poor person who was forced to sell part of his property or himself into slavery. His nearest of kin could step in and "buy back" what his relative was forced to sell (Leviticus 25:48f). The kinsman redeemer was a rich benefactor, or person who frees the debtor by paying the ransom price. "If a fellow countryman of yours becomes so poor he has to sell part of his property, then his nearest kinsman is to come and buy back what his relative has sold" (Leviticus 25:25; cf. Ruth 4:4, 6).


The nearest of kin had the responsibility of redeeming his kinsman's lost opportunities. If a person was forced into slavery, his redeemer purchased his freedom. When debt threatened to overwhelm him, the kinsman stepped in to redeem his homestead and let the family live. If a family member died without an heir the kinsman gave his name by marrying the widow and rearing a son to hand down his name (Deuteronomy 25:5; Genesis 38:8; Ruth 3-4). When death came at the hands of another man the redeemer acted as the avenger of blood and pursued the killer (Numbers 35:12-34; Deuteronomy 19:1-3)”


So Jehovah, abiding by His own Word, could only redeem humanity through a kinsman. Thus we find Mary chosen as the vessel to bring forth that kinsman.


So, our Kinsman Redeemer set His tent (in human flesh, which was required) among us. Christ Tabernacled with us. You can read about the Feast here, where it says, among other things:

“’Also in the fifteenth day of the seventh month, when ye have gathered in the fruit of the land, ye shall keep a feast unto the LORD seven days: on the first day shall be a sabbath, and on the eighth day shall be a sabbath. And ye shall take you on the first day the boughs of goodly trees, branches of palm trees, and the boughs of thick trees, and willows of the brook; and ye shall rejoice before the LORD your God seven days. And ye shall keep it a feast unto the LORD seven days in the year. It shall be a statute for ever in your generations: ye shall celebrate it in the seventh month. Ye shall dwell in booths seven days; all that are Israelites born shall dwell in booths: That your generations may know that I made the children of Israel to dwell in booths, when I brought them out of the land of Egypt: I am the LORD your God’ (Lev. 23:29-43)

The Feast of Tabernacles, also called Booths, comes on the fifteenth of Tishri (September-October), the seventh month according to the Jewish (biblical) calendar. This was the third feast that required a pilgrimage to Jerusalem to worship in the Temple and offer sacrifices and offering to the Lord.

This is Israel’s Thanksgiving feast in which they acknowledge the Fall harvest and God’s provision for them. It is happy celebration and a time of joy and rejoicing.
[...]”

A better dating for the birth of Christ, I think. This date also fits far better with the Scriptures describing the shepherds, too. No shepherds left their flocks outside in the Judean winter nights. Some Christmas Carols are beautiful in their imagery, but they are standing on Church Tradition rather than Scriptural tradition.


And what does that do to the dating of John the Baptist’s birth? His birth, if we follow the idea of God doing His thing according to His Word, may well have been on, or near, the Feast of First Fruits. This feast marked the end of Passover, but the beginning of the Harvest. And John the Baptist was certainly what you could call the first of the Harvesters for Christ.


The problem of nailing down the correct dates of these occurrences, after centuries of tradition, is not so very important. After all we are not celebrating the god Saturn, any more than we celebrate the goddess Ishtar at Easter. No, at traditional Christmas-time we celebrate the birth of Jesus of Nazareth, the Christ, Messiah, Savior. Where we choose to place that celebration, on our calendar, means little, as long as our focus is on that most wondrous gift ever given: the Son of God, to us, to redeem us from sin.


So don’t be chastened when unbelievers get mouthy about Christmas being celebrated on the Saturnalia. It’s true! Our Christmas celebration is based on the date of that pagan Roman celebration. And it doesn’t matter. Focus on God, Christ, and the reason for that celebration, and you’re on the right road.


Enjoy the Christmas season. There’s no reason not to. But remember why we celebrate in the first place! :D
Posted by benning at 10:31 AM 2 comments: