My Big Sis was born 354 days before I was, the family's first-born of three. We began our family existence in Ambler, Pennsylvania, which is near Chestnut Hill and Philly, a place I remember only in old 35mm films of the time. She was a blond-haired, hazel-eyed beauty who would shortly have a brother - myself! - and be oft-times considered a twin. Big Sis and I grew up to be very close. We had many of the same friends, even into High School, and we did many things together.

Big Sis has perfect pitch and can sight-read sheet music, so has a lovely facility for playing the piano. I loathed practicing the piano, wanting to learn something I could master immediately, and never got the skills she attained. But she and I could sing pretty well, so I could sing along as she played. She still has a pretty voice, but sadly, Big Sis never had a lot of power in that voice. That limited what she could do with it. Me, I had some power but once my voice changed I could never reach that boy-soprano quality that I had had. Ciggies and drinking put me more in the Sinatra category than the Harry Nilsson category.

Big Sis and I could quarrel, and did, and she had the exasperating habit of hitting me, fleeing to the living room, throwing herself on the sofa, and kicking like mad to escape my just retribution. Such are sisters.

She decided to become a nurse, something she would eventually abandon as the profession became every hospital's political football. But she studied hard and earned her degree and was a nurse.

Of course by that time I was far away on the Left Coast, and so had little knowledge of what she was doing and who she was seeing, so I missed meeting her betrothed. This was someone who turned out to be a creep. I don't know if I would have seen that, or seeing that would have said a thing. And would Big Sis have paid any attention had I said anything? Prolly not. 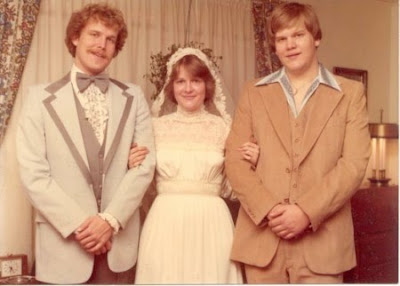 As a little girl she collected Paper Dolls - remember those? - and had a Barbie (I had a very manly G.I.Joe). We were both taught how to swim at a very early age, our parents loving to visit Ocean City, NJ, and we both filled our summers swimming competitively. We were quite at home in the water and spent our summers red-skinned, white-haired, and water-logged. We had a lot of fun, and I miss it a great deal!

Big Sis is working on her second marriage - the first she ended with urging from the family (he was an abusive, degrading, insulting putz, who needed a butt-kicking in the worst way!) - and has three kiddies to show for it. One is in High School, one is a Collegian, and the first born is biding his time, I suppose, looking for fame and fortune. Hubby is a tad odd, but look who's talking! The family is deeply into the Church scene and are very devout. Big Sis and I came to Christ around the same time, though I wanted more proof - I can be a stubborn idiot - and we both are what I consider Fundamentalists. She remains a conservative, as do I (surprise?), and we can talk about religion and politics without getting angry.

Big Sis is also an inveterate reader. As I, she will read anything she can get her hands on. We are both book addicts. Were we living in closer proximity - she's up in Jacksonville, while I am down here in Largo - we would be sharing books all the time. Heck, she even read my book! Says she liked it. Such are sisters, eh?

I miss the closeness we used to share, but we all grow up, grow older, and grow apart. That's the way of Life, and you can't recapture the past. I see her maybe twice a year, and we have a good time, but it's not the same, of course. It never can be the same.

Note: Just in case you're wondering ... Dad and I shared October 10th for a birthday, Li'l Bro has October 5th, Big Sis October 21st, and our Nana was October 17th. Poor Mom was an August 3rd baby - just a family oddball, I guess.
Posted by benning at 2:46 PM

Having all those birthdays in October must have made for a fun month.

Drove Mom crazy! We all loved German Chocolate Cake, and Mom made them. She wopuld get so fed-up with them that she'd ask, ever-so-sweetly, "Wouldn't you like something diffrent? You just had this! How about a nice ..." To which we always seemed to reply, "No, I want German Chocolate!"

I don't think Mom has had, or baked, that cake since the last of us left home. Heheheee!

Guess what? My kids all love German Chocolate cake, too!!!! But our birthdays are not all in the same month. Loved my birthday card! Brings back memories. Wish we werre closer - I would love to see you more. Remember teasing Tim, and getting tormented by him in return? Those weere the days!

You must have meant old so I e mailed you a song.

Did you look at your Li'l Bro's birthday post? ;-)

I affirm my being teased, however I completely deny tormenting anyone in response. I may have, occasionally, tried to use my status as "the baby" to my advantage, but that's it! That's how I remember it anyway.

And Mom says you really did tease that poor cute little fella!!! Poor Tim had to say Hands off Jeff. Do you remember??
But you were all good kids. Would not have changed a thing. And you are still good kids!!! Love you, M.

Both of my sisters live in Florida, too...but you knew that.

I remember Hands off Jeff!!! How funny!!! But he did use his status as baby to his advantage. That's probably why we teased him so much!!!!

I did read lil bro's card, by the way!!! I remember every incident. Not everyone has a family member who ate dog deworming pills. Or tried to get his head bitten off. He tried to off himself many times, without our help!!!! It was fun!!!!

We never really had to try to "do him in", did we? Heheheee!

I never tried to "do myself in". I was merely curious about lifes many wonders. Extremely curious.