Did We Learn Anything?

Did we learn anything from the Scott Brown election? 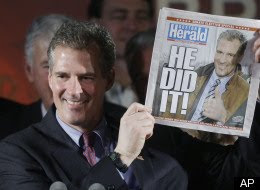 Now that nearly everyone with any interest has spoken about the victory of Scott Brown in the Massachusetts Senate special election, I thought I might put in my own two cents.


Like many conservatives I'm invigorated by the upset win by a Republican in Democrat bastion like Mass. One of only two Republicans in the Mass State Senate, Brown came from nowhere, with little real name-recognition in his state, to defeat the supposed shoe-in candidate of the Democrats, Martha Coakley. Coakley's name recognition was very high, owing to her government positions and her utterly cynical stance on the imprisonment of an innocent man (Gerald Amirault).


Despite her party credentials, and a huge lead in the polls after winning the Dem primary, Coakley was over-taken by the little-known Brown. She waged an unprincipled campaign, full of lies, innuendos, and foolish gaffes. Expected to simply be coronated by the Democrat machine in Mass, as the latest "Heir to the Kennedy Seat", Coakley found herself in a fight for which she was utterly unprepared. Even the last minute appearance of "The One" couldn't help.


Also not helpful were the suggestions of state officials that the seating of Brown, should he win, would simply take a lot of time, during which the Democrat Party expected to pass the Senate's version Obamacare. The people didn't care for that piece of underhandedness. In fact they found all too much of the Democrat Machine not to their liking. The agenda, the machinations, the slime for which they have become masters, the stupid comments of the candidate, all of it served to move many voters out of the "I voted for Obama; for Hope and Change!" column, to the "I want real, darned change!" column of Scott Brown.


The pundits will point to all sorts of reasons for the upset victory of the Republican in a dark blue state. All will have a bit of truth behind them, from anger over the arrogance of the Democrats, the disgust with the so-called reform of Health Care (nothing of the kind, actually, but simply a takeover by the inept Left of a vital part of our society), the dislike so many had for Coakley. None of the reasons completely fit the bill. And why worry about it?


What matters is that despite the effort of the Left to Palinize Brown, nothing stuck. Oh, given enough time the MSM could have, and would have, found enough information to distort Brown's record, as well as his message. They took shots at his truck, for crying out loud! Foolish, venal, childish, unworthy of a great nation's journalists and political parties.


The Republican Party stayed away from Brown. At first simply because they did not realize what a good candidate he was/is, or that the Democrats were actually vulnerable. They still believe they can win on Democrat Lite rather than core Republicanism. Then, when it became glaringly obvious that Brown had a good shot at winning, they wisely funneled some money into his campaign - a fifth the amount Coakley received from the Democratic Party. The only kudos to the GOP are for that last maneuver. Will they learn to support core Republicans, no matter what? I doubt it. They haven't in a very long time, if ever.


How bad was this for the Left? CNN refused to air the entire Brown victory speech. MSNBC, as you prolly know by now, also cut the speech while the clueless, and foul Keith Olbermann ranted and insulted Brown. A classy fun, smart speech was not interesting to the MSM, not because it was a bad speech, but because it was a Republican giving it. They even loathed his remarks regarding his daughters. How silly can you get?


Some of his remarks, from the prepared text:

[...]Let me tell you when I first got the feeling something big was happening in this campaign. It was when I was driving along and spotted a handmade, Scott Brown yard sign that I hadn't actually put there myself.

This little campaign of ours was destined for greater things than any of us knew, and the message went far beyond the name on the sign.

It all started with me, my truck, and a few dedicated volunteers. It ended with Air Force One making an emergency run to Logan. I didn't mind when President Obama came here and criticized me - that happens in campaigns. But when he criticized my truck, that's where I draw the line.

We had the machine scared and scrambling, and for them it is just the beginning of an election year filled with surprises. They will be challenged again and again across this country. When there's trouble in Massachusetts, there's trouble everywhere - and now they know it.

In every corner of our state, I met with people, looked them in the eye, shook their hand, and asked them for their vote. I didn't worry about their party affiliation, and they didn't worry about mine. It was simply shared conviction that brought us all together.
[...]

Some of his non-family thanks:

I'm grateful to all those from across Massachusetts who came through for me even when I was a long shot. I especially thank a friend who was there with encouragement from the very beginning, and helped show us the way to victory - former Governor Mitt Romney.

I'll never forget the help of another man who took the time to meet with me months ago - who told me I could win, and gave me confidence for the fight. It was all so characteristic of a truly great and heroic American, and tonight I thank my new colleague, Senator John McCain.

On a night like this, when so many people mark your name on a statewide ballot, you think back to the first people who gave you a chance and believed. For the trust they placed in me, and for all they have taught me, I thank my neighbors and friends in my Senate district and especially my hometown of Wrentham. The cause and victory that all America has seen tonight started right there with all of you.

The full text of that speech are here, at The Huffington Post. Read, enjoy, savor the fun of a humble win. You can find the video of Olbermann's melt-down all over the Net. Yeesh!


Was the speech too long? Perhaps. But Brown had a lot of people to thank, and he had a few points to make, too. And as others have noted, his supporters and campaign workers wanted this time. Wanted the candidate's time, and to revel in a hard-fought campaign that brought them all victory.


So what happens now? Massachusetts voters need to keep an eye on their new Senator, make sure he stands firm in his stated convictions. And Senator-elect Brown needs to be what he promised, and not become another go-along-to-get-along politico. But there's more.


The GOP, if it has any principles left, must see this election for what it was - the repudiation of politics over the common good. The win of more than a man, but of ideals which are central to the American experience. The GOP must go back to the First Principles of the Party and to the Constitution, stop playing Uriah Heep to the Democrats, and stand for something. Not for gaining and holding power. Not for Leftism Lite, but for American Exceptionalism as exemplified by the Founding Fathers, the Declaration of Independence, and the United States Constitution.


Better to lose elections while standing up for America than to lose them, or even win them, while bowing to the retrograde philosophies of the Left. Americans want better Health care, not Obamacare and the control of it by the Leftist bureaucrats. They want better cars, not the control of American automakers by the Left. They want clean air and water, not economically destructive 'Green' policies that will destroy jobs but enrich wealthy Leftists like Al Gore. Americans want a strong, tough military, and the end to legal coddling of blood-thirsty, fanatical terrorists.


They want honest representatives. They want representatives who understand that they are employees of the electorate, not the employer. Arrogance and insolence in an employee should merit dismissal, not a life tenure.


The GOP can learn this, if it wants to. Americans can lead the way for their wayward representatives.


Did we learn anything from the Scott Brown election?

I go to Washington as the representative of no faction or interest, answering only to my conscience and to the people. I've got a lot to learn in the Senate, but I know who I am and I know who I serve.

I'm Scott Brown, I'm from Wrentham, I drive a truck, and I am nobody's senator but yours.

Thank you very much.