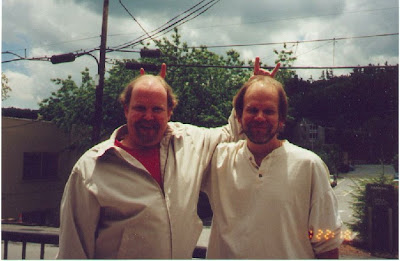 Li'l Brother has reached the ripe old age of 47! Like his older, distinguished brother - namely me! - he is nearly bereft of hair atop his head, has to fight to keep his weight from ballooning to astronomical heights, and tends to wear facial hair. He was born in 1960. Big Sis and I had no choice in the matter, were never asked, and would have preferred to remain just the two of us. Parents don't really care what the little kids think, do they?

So our grandmother arrived from Philly to stay with us while Dad took Mom to the hospital. I can remember watching them go out the door, but little else. I was five days shy of my fifth birthday. Big Sis was sixteen days shy of her sixth birthday.

What Happened the Year You Were Born? 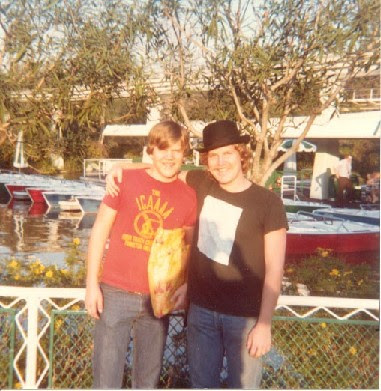 While I was living in California my Folks flew Li'l Bro out to visit me during the Christmas Holiday one year. We went to Disneyland - of course! - and Li'l Bro burned one of my white teflon pans trying to cook eggs. He'd never used a gas range before, so flames licking over the top of the pan meant nothing to him. On the plus side, he carried with him, on the plane all the way from Philly, a freezer container filled with Mom's Lentil soup! Yum!

When he was younger Li'l Bro hated steak. We didn't have it often as the folks couldn't afford it. But when we did, Mom made a hamburger for Li'l Bro while the rest of us enjoyed a good steak! I wish that had lasted longer. He hates mashed potatoes but enjoys broccoli, and all of us love seafood! Li'l Bro and I have an affinity for beer. We do like to try all sorts although he tends to favor the bitter lagers - like Budweiser - while I prefer less bitter concoctions.

Li'l Bro attracts accidents. When Dad was building a closet upstairs one year, and left a can of walnut stain on a shelf, Li'l Bro, who was very little then, wanted to see what was in the can. Unlike adults who bring the can down and look inside, little kids tend to turn the can over to see inside. So Li'l Bro was rushed to the hospital. A little, white-haired, hazel-eyed child whose skin was a deep walnut brown. *grin*

One day the oil man, who was filling the tank - the heating oil was below ground. Dunno why - knocked on the door with my little brother in tow. He had found Li'l Bro eating pills from a small bottle. De-worming pills for our puppy, Toby. So Li'l Bro was rushed to the hospital. A little boy who has never been bothered with worms.

While Mom was visiting a lady down the street, with my little brother wandering in her backyard, Li'l Bro decided to look into their dog house. The dog took umbrage at this breach of etiquette and bit Li'l Bro on the chin. So Li'l Bro was rushed to the hospital. He now has a scar on his chin and no longer peers into dog houses without asking permission of the occupant.

While riding his bike to swim team practice, one summer, he careened around a corner where men were laying fresh asphalt. His front tire hit the asphalt and stuck and Li'l Bro went flying. Kid had gumption, though. He continued to practice, and then went to the hospital. The doctor mentioned that the chlorine in the pool water had probably helped. At that same pool - in Langhorne - the way to the pool area from the parking lot goes down a cement-pathed hill. One summer, early, while skipping down that hill, he tripped. Let's just say Li'l Bro's knees are kinda scarred.

I could go on and on, but you get the idea. Accidents follow Li'l Bro. 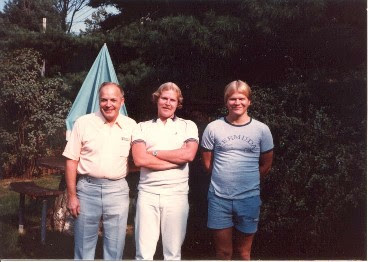 The accidents continued, but Li'l Bro persevered. At least he didn't succumb. Today he works in a plant as a Quality Control Supervisor, or something of the sort. He keeps a pair of cats - Lucy and Ethel (you figure it out), a pair of mischievous felines - and has had two others. First there was Spud (Li'l Bro is odd, what can I say?), then Armageddon (but I repeat myself), and now the pair. I don't get the cat attraction, but they make him happy.

Like his distinguished older brother, Li'l Bro is reticent about his love life, if there is any, and he remains a bachelor. But I figure one of these days he'll find the right lass to make him happier than the kitties do. Me, I'm not so sure of.

Funny how five years age difference can actually spell so much difference in tastes. He is a different generation than I. Our musical tastes are far different. Which is how I measure a person's place in time, I think. Much of what he listens to I cannot abide! Luckily, though, he predates the horror of Rap. We do tend to read much the same - we read everything we can find - and while I will pick up histories or biographies, I think Li'l Bro steers toward the suspense and mystery genres. He is a tad to the left of me politically, but that only means he is conservative with a small "c". While Big Sis and I are committed Fundamentalist Christians, I'm not sure what Li'l Bro is or believes. He won't really say.

But then, Big Sis and I are merely 354 days apart in age. Li'l Bro seems much younger. His friends were people we didn't know and had never met, while Big Sis and I knew practically the same people. After all, Big sis and I had nearly four years to bond together before Li'l Bro came along. Like all Baby Brothers he was coddled and babied far longer than we were - as we saw it - and I suppose we resented that. But we outgrew the feeling. 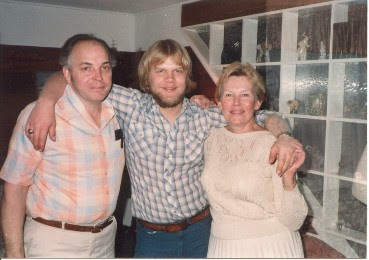 Hard to believe! Happy Birthday, Li'l Bro! I love you!

I hope your li'l bro isn't embarrassed by everyone reading your stories of his accidents. I have to be very careful about what stories I tell about my l'il sis.

He's up in Pennsylvania. I'm not worried. And besides, these are tales we still tell when we manage to get together.

No problem, I consider my scars badges of honor. Trust me, the story thing goes both ways as well. Maybe next week for my big bro's birthday.

My record, Li'l Bro, is nothing compared to your epic saga. Heheheeee!

I am indeed, a renaissance man, if that means older, scarred and poor. Never bowed however.

Benning,
This is one of the best and emotional things I've read in awhile,...and if you know me, emotion is not something that oozes too easily from my pores.

I too was born in 1960,... may 24th to be exact, so I thoroughly enjoyed the part on what was going on that year. I actually learned something too,... I always figured JFK was Prez that year but forgot the elections where that year and that he came to office in Jan/61... another morsel of info today.

Again, this was trully magical and I enjoyed the entire thing.

Thanks for making me walk in my own memory tour...

You're welcome, TP. The item one that struck me was the Eagles winning the NFL Chamionship. The only team to beat a Lombardi-coached team in a championship game.

I have no memory of that so enjoy it vicariously. ;)

That was a nice tribute.

It was an excellent tribute and fun to read! Your little brother sounds like a very interesting person. Anyone who names his cats Lucy and Ethel must be a fun loving sort of guy. :)

what great pics Benning..thanks for posting and happy b day bro!..Heh :)

What a flashback! Happy B-day to Benning's bro!

It was very nice, loved it myself and I hadn't seen a couple of those pics for years. If anyone is interested, Lucy and Ethel are now 17 months old and totally nuts, like most cats. Thanks again bro.

Hey benning! Don't know how I missed this - Now I have to get my own little bro to do one for me (of course, I could do one too, for him.

Jeepers, Quixote, when are you going to start a blog? Thanks for stopping by!

Happy birthday to both of my nephews!! and my niece too. How I enjoyed the pictures and the stories... I remember most of them very well. I love you!
Aunt B.

Thanks, Aunt B! Love you, too!