6,011 years ago the family of Adam was created of the dust of the earth. The Creator breathed life into the form of the first man of this family, and called him Adam, which means "Man" in Hebrew. This man was the progenitor of one human family whose destiny was to bequeath to all of humanity one man - the Son of the Living GOD - Jesus of Nazareth. How do I come to this particular reckoning of this momentous birthday? A 17th Century scholar, delving into, not only Biblical texts but the ancient texts of the Egyptians, Babylonians and many others, came to the conclusion - erroneously, in fact - that the earth itself was created in 4004 B.C. Bishop Ussher was correct in his calculations, but errant in his overall conclusion. 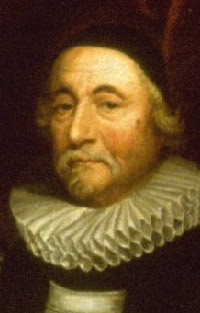 In 1650 James Ussher, Anglican Archbishop of Armagh and Primate of All Ireland, between 1625–1656, published "Annales Veteris Testamenti, a prima mundi origine deducti" ("Annals of the Old Testament, deduced from the first origins of the world"), in which he calculated the date of the Creation to have been nightfall preceding 23 October 4004 BC. Looked upon today as a silly man whose work was a joke to more scientifically-educated, modern people, he was a highly respected scholar in his day and was doing work considered of great importance at the time. Indeed, coming on the heels of his own work came the similar work of another scholar - Cambridge academic, John Lightfoot - and was preceded by a similar work by Renaissance scholars such as Joseph Justus Scaliger. In Ussher's time such a calculation was still regarded as an important task, one previously attempted by many Renaissance scholars. This was not a folly.

Ussher's chronology actually represented a considerable feat of literary scholarship if not science. It required the Bible to be firmly anchored in history, which demanded great depth of learning in what was then known of ancient history, including the rise of the Persians, Greeks and Romans. Constructing a biblical chronology also required expertise in biblical languages and in-depth knowledge of the Bible itself. Ussher's account of historical events for which he had multiple sources other than the Bible is usually in close agreement with modern accounts; for example, he placed the death of Alexander in 323 BC and that of Julius Caesar in 44 BC. On the other hand, the period of time between the Creation and the Flood depended on the version of the Old Testament that was used: Hebrew (1656 years); Samaritan Pentateuch (1307 years); or the Ethiopic text (2262 years). Ussher favoured the Hebrew version.

Ussher was an interesting man, a Protestant at the time of the English Civil War, he nevertheless supported his King, the Catholic Charles I, and was protected by his Protestant friends in Parliament, despite his loyalty to their enemy, against Protestant attacks.

He watched the execution of Charles I from the roof of the Countess of Peterborough's London house but fainted before the axe fell.

Such was his loyalty. He was no lightweight as modern "scholars" and experts would have us believe, but a scholar who preferred to delve into scholarly pursuits when he could follow them.

Now, knowing, due to modern geologic studies and discoveries, that the earth herself is extremely old, we know that Bishop Ussher's conclusions are in error. But in what aspect? As they relate to the age of the planet they are in error. Even if you consider the earth to be far younger than the accepted chronologies of modern science - and they are guessing in many places and computations - the earth is older than 6,000+ years.

But what if we simply remove the earth's age as a planet from consideration? What if we actually eliminate the doctrinal aspects of the Bishop's inquiry, and look at it as a simple historical chronology? What do we see?

We see a genealogy that spans the history of the planet from before the earliest known great city: Ur - Ur of the Chaldees - to the birth of a Jewish boy of Bethlehem in Roman Palestine, whose birth, Ministry, and Death and Resurrection are the crowning achievements of the Bible. It is a genealogy which some may question, but which Bishop Ussher managed to trace from the beginning to the end.

Ussher's chronology provides the following dates for key events in the Biblical history of the world:

Why is all this this significant? Basically the Bible is a book about the lives and struggles of one family. It is not the history of all Mankind, nor was it ever intended to be. Nor is it a book about the Jews, for their history begins at the seperation of Israel into two Kingdoms. No, the Bible has a single family in mind, which is winnowed over vast ages to one particualr line within that family, and then through that line to one particular man. That is the point of the Bible. That is its reason for existence. To show all humanity what was promised by GOD, the Creator, to all Mankind, if they would follow the Laws HE gave them. And when those Laws were violated - the punishment for violation of any of HIS Laws is Death - HE provided a Way Out. HIS book has one aim - to show what has been done, what is going to be, and how to claim the Way Out and Salvation. That's all.

For those who complain that "Adam and Eve only had three sons so where did all those other people come from?" ... Only three of Adam's children (Cain, Abel, and Seth) are explicitly named in Genesis, although it does state that there were other sons and daughters as well (Genesis 5:4). But remember that the Biblical account is not about all humanity but this one family. Other people populated the earth at the time, but only this family was a Divine Creation with a Divine purpose. That purpose was begun on the Sixth Day (Gen 1:26), and proceeded from there.

So, assuming Bishop Ussher's calculations are correct, and assuming as I do, that the first Five Days were of immeasurable length, then we arrive at the Sixth Day, the 28th of October, 4004 B.C. as the Birthday of the family of Adam, Abraham, and Jacob; the Family and Lineage of David, and Jesus the Christ.

Note: The Supernova Vela X exploded, some scholars maintain, in circa 4004 B.C, creating a spectacle of light around the Meditteranean. As Mystae.com describes:

"The Vela supernova most likely occurred 6,000 years ago (although estimates range from 5,000 to 11,000 years). At a distance of 1,300 light years from earth the Vela X pulsar is three to four times closer than the Crab Nebula. The supernova would have hung low on the horizon over the Mediterranean, a brilliant star shining as bright as the moon (-12.5 losing brightness at 4.5% per day). Due to defects in the cornea of the eye, a person viewing the supernova would see spikes a quarter to a third the diameter of the full moon (7.5 to 9 minutes of arc). It would appear as an endlessly dancing, varying mass of fire, shooting spears of intense color every way like a fountain. The landscape and the observer would be flooded with pulsing illumination. Tossed flocks of shadow bands would animate the landscape, moving eerily through forest and town."

The dead star is even now sending radio signals through the Universe. Could it have been a sign of the creation of this First Family?

Email ThisBlogThis!Share to TwitterShare to FacebookShare to Pinterest
Labels: Learning or Teaching

thanks for your take on the matter and the extensive research Benning..happy Sunday!!

There is an old (ancient actually) Jewish tradition that Adam and Eve had 60 Children, but only 3 are named.

I find it fascinating that birds preceded mammals in the order of creation and now we are finding that the dinosaurs that did precede the mammals were in fact birdlike creatures instead of big lizards.

And many were warm-blooded, which is not how we were taught years ago.

It just makes more sense that the dinos were.

Interesting perspective. I've pretty much concluded that the Creation account in Genesis is more of a synopsis than something to be taken literally. As in "a thousand years is as a day", etc.

I personally believe in the Big Bang Theory...

God Spoke, and BANG!! The Universe was created.

Tom: What prompted the move?

Thank you benning, a great account. For what it's worth, a grain of salt (for it was a saltwater flood)

'Noah's Flood' by Bill Ryan and Walter Pitman tells this story: There were two dramatic geologic events in the Mediterranean: One, around five million years ago when small shifts in continents opened the Straights of Gibraltar and the Atlantic Ocean roared into the Mediterranean basin. Then there was another, samples taken from the floor of the Black Sea show that the Bosporus opened in turn, salt water cascading into that basin close to 5650 B.C.: The dawn of writing was about 3500 B.C. so the people living tis huge flood maintained an account of this deluge - and it must have been very dramatic - some two thousand years, 'tellers of tales'... the predecessors of writers. Several records of a deluge go back 1,000 years before the Aramaic cuneiform manuscript of 900 B.C.

Q: I still harken to Velikovsky's "Worlds In Collision" and "Earth In Upheaval" which seem to make a lot of sense of many oddities in the geologic record, as well as the folklore of many peoples.

He was working on the Noachide Flood, too, but never finished.