An Illustrator You Should Know 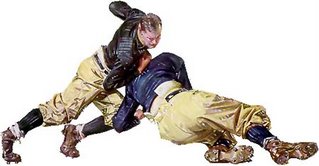 In January of 1907, The Century magazine published an article by Theodore Roosevelt, "The Ancient Irish Sagas". Among Roosevelt's well-considered thoughts the reader would have found some stunning illustrations. Those illustrations were the product of one of America's most popular and prolific illustrators: J.C.Leyendecker.

Leyendecker was certainly in fine company. If you've ever seen the classic Arrow Collar (later Arrow Shirt) ads, you are very familiar with Leyendecker's style and talent. He was a master at shadows and a glossy style of painting that he kept secret.

In his heyday, Leyendecker was the most famous Post cover artist they have ever had. His first cover for the magazine was in 1899, before the cover became a miniature poster designed to attract the eye of a newsstand buyer. He returned in 1903 for a 40-year association in which he produced over 320 covers. His covers for the first issue of 1906 featured a winged cherub that was the predecessor of the "New Year's Baby" - a concept that still holds today. Each year, Leyendecker would do the "important" Post holiday covers: Easter, Thanksgiving, Fourth of July, Christmas, and New Years. I could reproduce a dozen of them here and you'd still only get a hint of how effective he was at producing that eye-catching image. 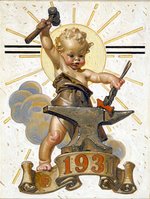 That New Year's Baby concept is famous and is one that I assumed to be ancient. Who knows? Maybe it is ancient, but Leyendecker made it modern, and infused it into the American consciousness. His male subjects were considered the equivalent of the Gibson Girl, and his illustrations of those men received mountains of fan mail, including offers of marriage, from adoring fans.

Leyendecker was a friend of Norman Rockwell, whose own illustrations show Leyendecker's influence. Leyendecker was believed to be gay, though I've seen nothing that confirms that aside from his having a close companion - Charles Beach - with whom he lived for 50 years. Originally his model, Beach became Leyendecker's assistant and manager. But Leyendecker was famously reticent about his private life, and little is known other than anecdotes from friends and acquaintances. We may be able to infer some things about Leyendecker from some of his images, but beyond that, who cares? 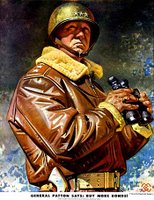 His brother Frank was a talented illustrator in his own right, but far less prolific, and prone to leaving his work undone.

It should be remembered that though Frank was an excellent artist himself, he constantly struggled with the label of "J.C. Leyendecker's brother." According to Schau [Michael Schau, author of a Leyendecker biography in 1974], he had trouble completing jobs, which may account for the dearth of his art.

Frank died in 1924, reportedly from an overdose. But his work also is fine evidence of the family's talents.

In 1943, the editorship of the Post changed and the new editor felt that Leyendecker was too strongly associated with the "old" magazine. So goes 40 years of a mutually satisfying relationship. Joe had to go looking for work. He found it, but not in the quantity he was used to. He maintained his palatial home in New Rochelle, but had to let the servants go. [Enter Norman Rockwell!]

Some of the new commissions were war posters featuring the commanding officers of the U.S. forces encouraging the purchase of war bonds. The American Weekly hired him in 1945 to do covers. A Sunday supplement to the Hearst newspaper chain, the Weekly was printed on newsprint. The quality of the reproduction was nothing like Leyendecker had been used to and it must have rankled him. The effort he put into the paintings showed some of his frustrations. Many were recycled Post covers with minor changes. In 1951, while working on yet another American Weekly cover, Leyendecker had a heart attack and died. His sister and Beach had a yard sale of his canvases (and there were many as he tried to always insist on the return of his originals). $75 would have purchased any of the Post covers.

The Norman Rockwell Museum website has a webpage devoted to Leyendecker. Among the paragraphs I found this enjoyable anecdote: 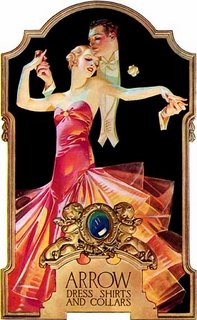 Norman Rockwell referred to him as "the great J.C. Leyendecker." in his autobiography, My Adventures as an Illustrator, Rockwell acknowledges Leyendecker's influence and inspiration. They were friends and neighbors. Rockwell's autobiography devotes a chapter, The Mansion on Mount Tom Road to Leyendecker. He tells of their first social evening when J.C. and his brother Frank were invited to the Rockwell's home for dinner. Rackwell hired a cook to prepare a Thanksgiving dinner in July, complete with turkey and trimmings. After a very awkward beginning of the evening, they were called in to dinner. When the cook came through the kitchen door with the turkey, she slipped on the edge of the rug and the turkey rolled under the table. Rockwell crawled under the table from one side and Leyendecker from the other. They met over the turkey which was lying on its side with stuffing gushing from its breast. "That smells good," Leyendecker said as he tasted the stuffing with his finger. When the turkey was put on another platter and dinner was served, the conversation and laughter flowed and the artists became fast friends and remained friends for over twenty-five years.

So many illustrators today, with all the technological help they can muster, cannot approach the artistry of such illustrators as Leyendecker, Parrish, Rockwell, and the rest. Instead of creating modern advertising's first male sex symbol, they slide down the garbage chute to give us little girls dressed as hookers, and little boys as pimps. Ahhh, what we've lost, eh?

Curtis Publishing has copyrights of many of the cover art from the Saturday Evening Post and other magazines by Leyendecker. Click on through and enjoy the show.

Artcyclopedia has many links.

And do check out the American Art Archive for more images and information about J.C. Leyendecker. You won't be sorry! 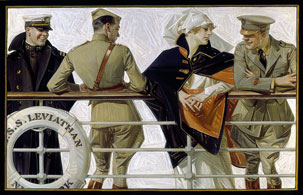 Those are phenomenal, Benning! Thanks so much; I've gotten a few wonderful desktops and a great history lesson from you!

I never know what to expect from you. Thank goodness! That was fascinating. He sure is my kind of artist. I love it. You said:

Leyendecker was believed to be gay, though I've seen nothing that confirms that aside from his having a close companion - Charles Beach - with whom he lived for 50 years.

Maybe he and Charles were just confirmed bachelors - like me. ;)

Thanks for the Mt Hood pic but I'm glad I live 300 miles southwest of it because it is a volcano.

Great pictures. Once upon a time, in what seems at times to be another life, I was an art major...

"check out the American Art Archive for more images and information about J.C. Leyendecker. You won't be sorry!"

The Popcorn and Gravy movie club has a second installment, this time at Megan's blog, Diary of a Raving Lunatic. A movie comment by anyone is welcome there (including one by a CO-CEO of the club).

I'm glad you all enjoyed this. It's amazing to me just how much art is out there, forgotten by us. The Internet is a fabulous way to discover things, isn't it? Thanks for stopping by! I appreciate your visits and your comments.

There will be more artists on the way, trust me! LOL

Thanx the the Leyendecker info. Great stuff. Anyone who has studied the stellar artist knows that he had his brother and his sister as well as Charles Beach living in the manse. Weird setup. At least he was one of the few making a fortune during the Great Depression. What the Post did to him was flat wrong. Rockwell criticized Leyendecker for being "unable to paint women with compassion." The women he painted are sexy and compassionate enough for me. If anything, he painted men with too much compassion.