Today, December 7th, 2006, we remember the sneak attack on the US military installation on Pearl Harbor, Hawaii. My grandfather was too old to serve during World War II, my father far too young (he was 13 years old in 1941), but my mother's father did serve. My uncle would serve in the US Marines following the war. My respect for all those men and women who have served, and now serve, in the US Military is unbounded.

In 1941 war was everywhere. Yet we were at peace. An uneasy peace, but peace, nonetheless. 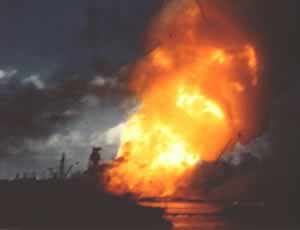 Pearl Harbor. Dawn, 7 December 1941. More than half of the United States Pacific Fleet, approximately 150 vessels and service craft, lay at anchor or alongside piers in Pearl Harbor. All but one of the Pacific fleet’s battleships were in port that morning, most of them moored to quays flanking Ford Island. By 10:00 a.m. the tranquil Sunday calm had been shattered, 21 vessels lay sunk or damaged, the fighting backbone of the fleet apparently broken. Smoke from burning planes and hangers filled the sky. Oil from sinking ships clogged the harbor.

Once again, from Pearl Harbor.US 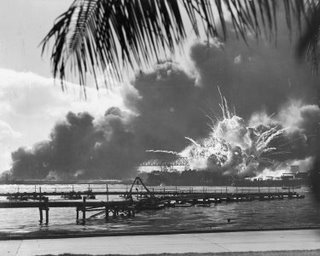 The attack on Pearl Harbor was the culmination of a decade of deteriorating relations between Japan and the United States over the status of China and the security of Southeast Asia. The breakdown began in 1931 when Japanese army extremists, in defiance of government policy, invaded and overran the northern-most Chinese province of Manchuria. Japan ignored American protests, and in the summer of 1937 launched a full-scale attack on the rest of China. Although alarmed by this action, neither the United States nor any other nation with interests in the Far East was willing to use military force to halt Japanese expansion. 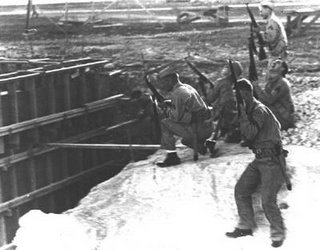 Over the next three years, war broke out in Europe and Japan joined Nazi Germany in the Axis Alliance. The United States applied both diplomatic and economic pressures to try to resolve the Sino-Japanese conflict. The Japanese government viewed these measures, especially an embargo on oil, as threats to their nation's security. By the summer of 1941, both countries had taken positions from which they could not retreat without a serious loss of national prestige. Although both governments continued to negotiate their differences, Japan had already decided on war.

The attack on Pearl Harbor was part of a grand strategy of conquest in the Western Pacific. The objective was to immobilize the Pacific Fleet so that the United States could not interfere with these invasion plans. The principal architect of the attack was admiral Isoroku Yamamoto, Commander-in-Chief of the Japanese Combined Fleet. Though personally opposed to war with America, Yamamoto knew that Japan's only hope of success in such a war was to achieve quick and decisive victory. America's superior economic and industrial might would tip the scales in her favor during a prolonged conflict. 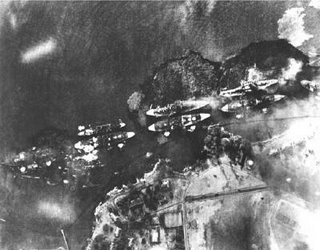 "...the Japanese strike was a "strategic and tactical disaster for Japan, though Japan did not recognize this." Because Pearl Harbor was so shallow, the ships that were hit simply settled into the soft harbor bottom, and "were for the most part raised; by the end of December, two of the battleships that Yamamoto had imagined sunk were on their way to the west coast for repairs. All but the Arizona were returned to service."

In addition, since the attack was on a Sunday, most of the Navy personnel were ashore when the planes attacked and so escaped death or injury. When the ships were repaired, they could sail with almost full crews.

The attack was a strategic Japanese failure for four important reasons:

2. Ringing Pearl Harbor were petroleum and gas tanks by the score, since petroleum is the life-blood of any fleet. Not one tank was so much as punctured, let alone destroyed.

3. Repair facilities were all around the fleet anchorages to fix any problems a ship would have; not one repair shop was hit.

4. A key component of any navy is the attack submarine. American subs were berthed within yards of the battleship anchorages, yet not one was hit during the air raids.

Thus, for all its shock value, for all the anger vented at this sneak attack, Pearl Harbor was a strategic failure. Within hours, fleet vessels were topping off their tanks and heading out to sea. Damaged vessels were sailed to the fleet repair facilities for patch-up, then sailed to arms storage for ammunition and supplies; they were at sea within hours or days.

The fleet submarines, untouched and eager for revenge, loaded up on food and ammunition and torpedoes and were at sea, hunting Japanese vessels, within days of the attack.

The huge, world-shaping effect of the Japanese attack: In an instant, the American public was galvanized into white hot fury and was ready, even eager, to go to war. This was the sleeping tiger that Yamamoto feared -- it was huge and united and bent on revenge."

And Japan would very shortly reap the whirlwind. 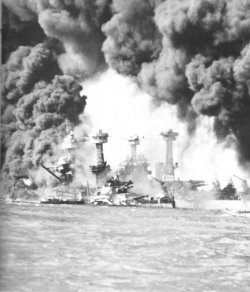 For many decades some historians have done everything in their power to place the blame for the Pearl Harbor attack on its victim: the United States. The US was responsible because it tried to limit the Imperial Navy's strength through treaties; we were responsible because we tried to choke off Japan's access to natural resources the Japanese needed to build their industrial society; the US was racist and arrogant toward the Japanese people. And so on. All of those excuses fall flat. Because at the end Japan attacked a sovereign nation without warning, killed its people, damaged its ships and planes, and went on to invade and attack that nation's installations in the western Pacific. They would treat captive peoples with barbarity. And they would move into a military/political alliance with the Axis Powers of Fascist Italy and Nazi Germany.

Every bit of damage inflicted upon Japan during World War II was a direct result of their own actions. And those who insist that the dropping of two atomic bombs on Japan was an act of racism, an act un-necessary due to Japan's prostrate condition at the time - ignores reality. In the real world, atomic weapons were created to be used on Germany. When Germany fell before the bombs were ready, they were then available to be used against Japan. Remember: the US military estimated the expected US military death toll of invading the Japanese mainland before Truman decided to drop the "bomb". Many of those, who blithely call the bombing racist, would probably not have been born had the US decided to invade rather than use the most powerful weapon at its disposal. Because their fathers would likely have died storming the beaches of Japan. 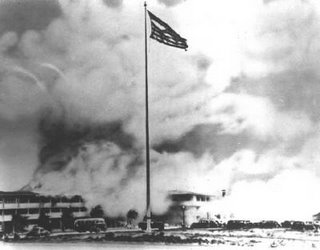 War is no place for tender feelings. It is the place for the destruction of the enemy. And Pearl Harbor was the lit fuse that would destroy Imperial Japan. The Japanese lit that fuse themselves.

"I fear that all we have done is awaken a sleeping tiger, and filled him with a terrible resolve." --Admiral Isoroku Yamamoto after the attack on Pearl Harbor 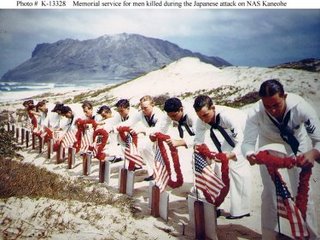 Following Hawaiian tradition, Sailors honor men killed during the 7 December 1941 Japanese attack on Naval Air Station Kaneohe, Oahu. The casualties had been buried on 8 December. This ceremony took place sometime during the following months, possibly on Memorial Day, 31 May 1942.
Posted by benning at 9:49 AM

What a great post. A lot of history.
My grandfather fought in World War II but in Europe. I remember him talking about how the men in his company were getting prepared to leave Europe and head to the Pacific for the invasion of Japan. None of them were very anxious.

I've seen video of veterans recalling the preparations for invading Japan. To a man they all deemed it a death sentence, and none expected to survive. My memory is hazy, but I recall estimated Allied deaths would be upwards of 500,000 if the home islands had to be taken by invasion.

I've actually known three people in my lifetime who survived Pearl Harbor, Benning. They have all passed on. This is a wonderful post and a great tribute.

Just like with 9/11, there have always been some Americans who will blame this country for everything. It's infuriating!

May God rest the souls of all who have died protecting our lives and our freedom, wherever they have fought.

A most excellent summary. For me it is still 'a day that will live in infamy'. I was 8 months old at the time. But I sure remember the
celebrations on VJ day!

Perhaps the attack on Pearl Harbor was only done half-heartedly because Isoroku Yamamoto opposed to war with America.

Wow what a wonderful post. So much history and effort put into it!

God bless all that have gone before us to protect us from they tyrannies of evil.

It's unfortunate that the American people basically insisted we wait until we were attacked to act.

Pearl Harbor may have been a strategic mistake, but the Japs made the most of it by conquering nearly everything worth conquering in the Pacific rim in the weeks and months following December 7th.

The loss of life that resulted was many times that of the original attack and many times more as we clawed our way back towards ultimate victory.

But I suppose it's monday morning quarterbacking (1941 style) to suggest that we should have had a stronger deterrent or taken pre-emptive action.

However, we can and should apply the lesson to present day situations. Unless we are once again constrained by the reluctance of the American people to act.

And those who fail to learn from history are destined to repeat it...

For many decades some historians have done everything in their power to place the blame for the Pearl Harbor attack on its victim: the United States.

How weary I grow of the blame-the-United-States traitors!

In 1941 war was everywhere. Yet we were at peace. An uneasy peace, but peace, nonetheless.

Now, why does that sound familiar for today?

Well done tribute Benning! The beginning part of Franklin D. Roosevelt's Infamy Speech to Congress and the American people in response to the Japanese attack, "Yesterday, December 7, 1941 - a date which will live in infamy..." remains true as that date still lives in infamy today.

December 7, 1941 began a tragic time for Americans and eventally the aggressors themselves culminating with two atomic bombs being dropped on Japanese cities.

"Be not deceived; God is not mocked: for whatsoever a man soweth, that shall he also reap."
(Galatians 6:7)

What a beautiful memorial, Benning!

Wow, what a sweet job, Sir. That is so well organized and rich with history/facts that I will be adding it to my own reference library. Great!