As promised when I posted my Halloween tale - a dark story, but one that wrote itself so quickly - here is my Christmas tale, born of some odd conversations while on break when I worked at the Seminole Casino. Trust me, the conversations went into some very odd places, but they inspired this tale. I published it in 2002 at T-Zero: The Writer's Ezine for which I received the princely sum of $15. I was honored and joyous to get this puppy published! For the full effect try to hear Andy Griffith while reading it. That's the voice I was using to speak it and then to write it. I hope you enjoy the Dickens out of it! 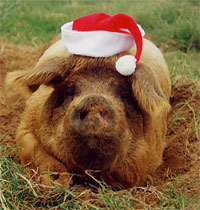 Well, sir, this one year I'm a-tellin' you about, Ol' Burleigh got some fab'lous idears in his head. Seems he saw an advertisement in some magazine, and it done sparked him. This was gonna be a Christmas tree to "beat the band." Did I mention that Ol' Burleigh ain't the brightest bulb on th' tree?

Now Burleigh decided a train would be a nice touch, a-circling 'round the floor under that tree, and not just any ol' train neither. It was gonna be big enough to carry Winston. Winston is one of Burleigh's pet hawgs. Burleigh has a soft spot for hawgs; thinks they's smart and nearly as nice as people. Burleigh likes to play checkers with his hawgs, but that's another story.

So Burleigh bought hisself a set of train-tracks and a big enough train to hold Winston. Took him months to find the durn thing, but find it he did. Now, to add to the beauty of the scene Ol' Burleigh decided he wanted to put candles on the ends of the lower branches, and not just any candles. No, sir. He wanted them funny candles what sputter and don't blow out. Ol' Burleigh figgered they'd stay lit longer and look purtier.

Christmas day in Pine Oil Creek 'n the en-tire population of th' town is there, trudgin' up the long icy road to th' Hunsecker home; all 38 of us 'n all 23 of the Hunseckers. Quite a crowd, it was. Th' womenfolk was all decked out in their finest with their perfume battlin' the aroma of turkey 'n spuds. Th' fellers dressed to th' nines and all of 'em an-ticipatin' the taste of Nana Hunsecker's Sweet Tater Pie. Ever'body gathered 'round the big Hunsecker Family Christmas tree for th' lightin'. Ol' Burleigh had a grin on his face to rival th' Cheddar Cat from "Alice in Wunnerland."

We all hushed up as Burleigh lit them funny candles. We "oohed" 'n we "ahhed" as he plugged in the lights. It was the purtiest tree ever. Then come the "piece-of-resistance:" Ol' Burleigh threw the switch and around the tree came that train, a-tootin' 'n a-puffin' smoke. Ridin' behind the engine was Winston, dressed in a bright red Santa coat with a red stockin' cap on his head, beady little eyes wide in fright. 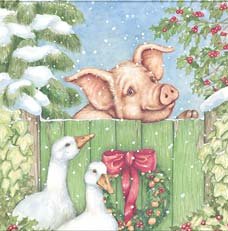 Now I backed up from that tree when I saw this. A 300-pound hawg ridin' a toy train didn't seem such a good idear right then. Havin' been around for the "Great Popcorn Catastrophe," I knowed a Burleigh Hunsecker bad idear when I saw it. Some of th' others moved back, too. We ain't stupid.

Well, Sir, 'bout the third time around that tree we could see Winston's been thinkin' on this. Hawgs don't much care for trains, much less ridin' on 'em, and Winston weren't no different. Natcherly he decided to hop off. When he did, that curly tail hooked onto that purty garland and whipped it right offen that tree. Them funny candles got stuck in the garland 'n they come down, too, still a-sputterin' 'n a-sparklin'.

Thing is, Winston doesn't like this a-tall and he took off a-squealin' in fright. Needless to say this wasn't what Ol' Burleigh had in mind. He let out a yelp and took off after Winston. The tree, meanwhile, teetered and come down, clippin' Nana Hunsecker on the head. Granny Hunsecker yanked open the front door 'n yelled to Winston 'n out the door he scooted, garland and sputterin' funny candles twistin' away behind him. Now Ol' Burleigh is only a step behind and he flew out th' door right after that hawg. Winston was off th' porch 'n flyin' down the walk when he lost his footin' on the ice 'n started a-skiddin'. Ol' Burleigh hit th' ice and he landed on his rump, careening into a snowdrift.

Now when Winston finally came to a stop he's got this garland snakin' 'round him, them candles jest a-hissin' and a-sputterin', 'n he let out a squeal 'n commenced to scramble to git away. Finally his hooves got some traction 'n he was off 'n runnin' again, headin' down th' only other shoveled walk they is. That'd be the one leadin' to the family outhouse. Ol' Burleigh, meanwhile, got to his feet 'n wobbled into th' same walkway.

Now Ol' Burleigh had snow meltin' into his eyes, so LORD only knows what he thought he seen, but he let out a scream and slip-slided down that walkway toward the outhouse. He banged into the door and tried t' open it, but you know how them door latches are in winter. They stick. Winston has a head of steam goin' and he followed right after Ol' Burleigh. Now, a 300-pound hawg takes some stoppin' even on dry ground; on ice there's no stoppin' him. Winston rammed right into Ol' Burleigh, they smashed right through that door and disappeared with a squeal and a howl!

We all heard the splash. We could hear Winston squealin' and Ol' Burleigh bellowin' down there. Musta been cold, not to mention evil-smellin'. I noticed that garland was still stickin' out the doorway with them funny candles still a-sputterin' like crazy. Then it got pulled down. I reckon with all that splashin' around the gasses down there musta churned up some,' cause it weren't a second or two later that they was a "Whoomp!" and a "Whoosh!" and that outhouse plumb disappeared in a cloud of foul-smellin' smoke.

Granny Hunsecker finally caught sight of Ol' Burleigh up in the big Spruce tree by the road. Winston was up there, too, sittin' on top of him. Burleigh had his eyebrows singed off and Winston's tail weren't curly no more.

Now, I'm pleased to report that we all enjoyed Christmas supper at the Hunsecker Homestead that year. The turkey was baked to a fine golden brown, moist and right tasty. The spuds were mashed to a "fare-thee-well" and smooth as could be. Toppin' it off was Nana Hunseckers Sweet Tater Pie that kinda melted sweetly on th' tongue. Yessir, it was a fine meal.

And Ol' Burleigh? Well, Granny Hunsecker made him stay out on th' porch and eat his supper there. The Hunseckers might not be the brightest folks around, but they are jest about the nicest.

Y'all have a Happy Holiday, hear?

That was a tall tale well told. And the word verification is fitting - cowbig.

That was extremely enjoyable. This made me think of a short story I wrote some years back. My story is not nearly as good, but it did have to do with "fire."

If I find the file (wherever it is) I'll let you read it if interested. I think I wrote it in the middle of the night after being out on the town...

This story of yours flows really nicely and I enjoyed the voice.

?"piece-of-resistance"? Ya gotta love it

I did hear Andy Griffith while reading it and it is a very nice Christmas tale indeed.

You call that dark, mon ami?