Mike's America reminds us today that

'Labor Day marks the end of summer and the official start of the political campaign season. 2006 may be a watershed moment in American politics. While all the conventional wisdom that predicted doom and gloom in 2002 and 2004 was wrong, who knows? The punditocracy might get it right this time and we find ourselves dealing with House Speaker Nancy Pelosi and the defeaticrats in charge of the legislative portion of the federal government for the final two years of the Bush presidency.'

In his post, Playing at a Polling Place Near You: "Revenge of the Peace Fascists" he takes us for a short, appalling look at nasty happenings during the last few elections and warns of why they may happen again. 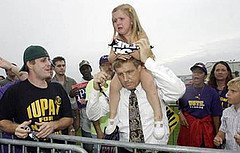 The assault against private property is only the first step in that long, slow slide to fascism. The next step is illustrated here during the 2004 election when pro-Kerry union thugs surrounded 3 year old Sophia Parlock as she sat on her father's shoulders and tore the Bush/Cheney sign from her hands and shouted at her and her father as Parlock's 11 year old son looked on in horror. 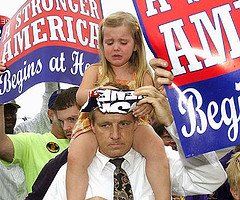 Peace Fascists claim that President Bush and conservatives threaten their civil rights and would curtail dissent. Yet here we have a 3 year old girl subjected to the true character of those who are imbued with what they claim is an "absolute moral authority.

"Two weeks ago on my own blog, At Home in Hespeler, I put up a plea for donations to my Terry Fox Run on September 17th. That plea generated 1 donation, and 1 link from the blogosphere. That link generated one more donation, for a total donations from Conservative Bloggers who visit my site and Blue Blogging Soapbox $120. Later, Blue Blogging Soapbox put up a $500 challenge to his readers, to a great yawn."

His post resonates, as it should, at a time when the Libs demand that all of us show our warm-heartedness by allowing the government to steal our money for things the Libs support. The Libs usually use your money to show their warm-heartedness.

My finances being stressed beyond the breaking point I am adding the link to my sidebar, poste-haste. I will also confess that I have responded to two donation requests in the past year - online requests by respected bloggers - that taxed me. But they also made me feel good. Good that I could donate, regardless of the paltry amounts, good that I could help, even in such a tiny way. Good, because it was my choice, and not the choice of some do-gooder in the government.

Please read his post, give if you can, link if you cannot. Heck, link no matter what! It is a good cause.

Let's give Brian a reason to have faith in us, okay?

Update: Well, I voted! I always vote. If you don't vote, then your complaints about the government are meaningless. Oh, you have the right to voice your opinion, but who really cares what your opinion is? Don't vote? Keep your yap shut.

And don't give me that, "My vote doesn't really count," garbage. When there are illegal votes being cast, every legitimate vote is important. In primaries, it could be your meager vote that puts a good candidate on the ballot in the General election. Aren't registered? Then go to the local library and get registered! It's become so easy to register to vote that no excuse is legitimate!

Thanks for the link Benning. I have a seaking suspicion this thing is going to take off.

Benning: Glad you enjoyed "Revenge of the Peace Fascists."

It's a reminder that we need to win the political battle if we ever hope to win the war on terror.

We have one month to make sure every member of our families and every friend and acquaintance is registered to vote and DOES vote.

Also, time is short for members serving in the military to get their absentee ballots completed correctly, POSTMARKED and returned to their county election board well in advance of election day.

Yes, let's get out and vote! I've developed a (terrible?) habit of pulling that big Republican lever in recent years...and haven't seen much reason to do anything differently.

I think Mike came up with a very apt description!

That's one of the best descriptions I've heard yet, along with the question: "Why are peace activists so violent?"

We can add the story about the National Guardsman, in uniform, who was attacked in Parkland Washington last week by people calling him a "baby killer."

Yes, those lovers of peace sure are violent.

"Peace Fascists"! I add my kudos to those of the above comments for that one, Benning! Great term! Next time it's appropriate I shall use it and give you credit for it!

The term is Mike's! I just copied it. I'm quite good at that. LOL