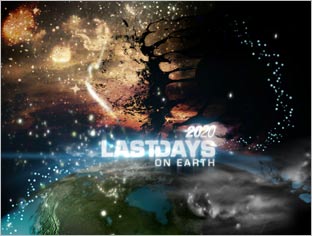 Tonight ABC brought us a two-hour "20/20" special, "Last Days On Earth". For most of it I enjoyed the graphics and the speculation. Some of it was overwrought, as is usual with the broadcast media, and had the typical feel of the media 'Fear Fests' we've all gotten used to. Over the two hours we were treated to short discussions of such possible catastrophes as a large Asteroid strike (seems we no longer call the objects meteors, meteoroids, or meteorites. Now they're all 'asteroids' according to ABC.), the eruption of a Super Volcano, and Nuclear War (it will probably be caused by accident, says the ABC experts.).

When it came to the Number One threat to Earth, they saved their favorite for last. And for the longest segment of the show. Can you guess what it was? I'll give you a hint: Al Gore was a featured expert!

Yes, that's right! The Number One Threat to Planet Earth is Global Climate Change, known to you and I as 'Global Warming'.

Among the insights offered by the experts was one fellow who said, "We have Holocaust Deniers and we have Global Warming Deniers." And he said he didn't see much difference between them. "The debate is over," said a few others. Scratchy video of a few pundits calling global warming a fraud, were offered. Gore states that we must provide Moral Authority to make such polluting nations as China join us in fighting global warming.

Hmmm ... we can shame them into stopping the kind of polluting that the Eastern Bloc engaged in for decades? Why didn't we think of that before? Is it because we cannot shame a Communist nation into doing a damned thing? Gore was, as always, condescending in his tone. And he still doesn't explain why rich Leftists like himself, with their SUVs and private jets, are exempted from the scorn heaped on polluters like you and I who are struggling to make a living.

Again the experts reminded us that the highest annual tempersatures recorded have come in the last fifteen years. What they neglected to explain is that those temperatures are taken in or near cities. And what are cities if not huge heat sinks? Want to lower the temperatures in cities? Plant trees. Lots of them. Put foliage on the tops of buildings. Green up those ugly, barren, wastelands we call cities.

Of course when you do that, guess what? Carbon dioxide levels will rise! We don't want that, do we? After all we know that rising levels of CO2 are the cause of Global Warming. And we humans are causing that rise. So the answer is to kill all the trees? Hmmm ... that doesn't sound right, now does it?

Well, they lie. CFCs sink, folks. They enter the soil and are broken down within hours by the bacteria in the soil. How odd that the experts missed that. Wonder why? Because that would mean that the entire Ozone Hole scare was a fraud (it was). Can't have that! By the way, did you know that the Ozone layer, which doesn't get 'holes' in it, thins every year? And has since it was first discovered? Did you know that it thins most when the temperaures are at their coldest? Ozone thinning, from all the evidence available, is cyclical and normal.

CO2 levels are variable, and are more dependant on the oceans of the world than any other factor.

Global Warming, when it is understood as a natural part of the earth's climatic cycles, is normal. It is poorly understood. And it happens whether we pollute or not. Just how many factories were in production when the Vikings could colonize Greenland, and when they found grapes growing wild in Massachusetts (Vinland, remember?)? How much human pollution was in play when Mark Twain could refer to Citrus groves growing along the Mississippi river? At the height of the modern American pollution period, the 1950s and 1960s, that time when we should have seen some kind of warming in the US, the Frost line moved south.

What does that mean? It means our world cooled a bit in the 20th Century. Growers had to move farther and farther south to be able to grow oranges, because killing freezes moved farther and farther south. Make sense? More pollution in the air and we were seeing the earth cooling a bit. Now, with our pollution levels falling - yes they are! - we're seeing a slight rise in temperatures. Seems to go against the received wisdom of the Global Warming Priests.

I posted - "It's Gonna Get Cold" - a short time ago about the possibility that we are moving into a new Ice Age - gonna take centuries if it does happen, so don't rush out and buy mukluks - brought on by tectonic activity in the world's oceans. Check it out and follow the links. You'll read a few things that fly in the face of the Al Gores of the world.

Then go to the library and look for a few books by Dixy Lee Ray - the late Ray was Governor of Washington, chairman of the AEC, and a wonderful thinker and writer, among her many accomplishments - such as "Environmental Overkill: Whatever Happened to Common Sense?" or "Trashing the Planet: How Science Can Help Us Deal With Acid Rain, Depletion of the Ozone, and Nuclear Waste (Among Other Things)". I think you will be very surprised at just how much the experts, media, and politicians have lied and hidden in their rush to Socialize the world.

I just read, "Modern anti war activists seem to think that spitting on soldiers is for wimps", at Leaning Straight Up. Shocking! This should be a wake up call! Bastards! I'm so freakin' angry! Go read it! Take your blood pressure pills first!

Meanwhile The Anchoress shows us how adults disagree with each other. Big difference, don't you think?

Jeanette at Oh How I Love Jesus presents a new look at the Rapture. The “Great Escape” Misunderstanding is a way of looking at the Rapture I'd never considered. Food for thought, Christians!

Always On Watch posts about the education scene. As an SAT 'by-the-skin-of-my-teeth' test taker, I can understand the desire to skip the hard work it takes to pass. SAT's, Genius, And Smart Pills shows us what may be on the horizon (and you thought using calculators in class was abig deal, huh?). Not sure how to take this, but I wonder if this is the next great shortcut for lazy students. Check it out!

Angel lets us in on the latest Harvard stupidity. It would seem that inviting bloody-handed, murderous Muslims to speak is just fine and dandy to the Elite Leftists that hide in the Ivory Towers of Academe.

Getting burned out with the Katrina Waltz played by the Media? Me, too! And Gayle reminds us that the problems of the 9th Ward are not new. "The 9th Ward was not caused by Hurricane Katrina. It was a mess back in 1990 when we accidently wound up there, and I suspect for far longer than that."

Sister Toldjah has the transcript of Don Rumsfeld's speech that is a must-read. As ST says, "This is a speech that should have been given long ago, by the President himself. It’s time to take the gloves off and clearly distinguish who is part of the problem and who is part of the solution. It looks like the GOP now is doing just that. Better late than never."
Posted by benning at 11:34 PM

It took a while to get here as your page takes a terribly long time to load on dial up, but I managed it and I'm very glad I did. What an excellent article, Benning! Kudos!

I will check out a couple of your links later. I don't dare leave this page until I have commented... might not be able to get back in.

Algore really makes me angry. I honetly can't watch him; that's how angry he makes me. I don't think I could bear having him as president! These global warming freaks don't bother with simple things such as the facts. It's the same with our fight against Islamofascists; they don't bother with the truth concerning that either. Denial and their agenda is all they are interested in. Some are just ingnorant, but people like Algore know what they are doing and they lie on purpose. How they can look themselves in the mirror is beyond the capability of my poor brain to comprehend!

I absolutely loved this post, and you did a wonderful job of debunking them. :)

I really don't get why they cling to an obviously false concept, especially when they don't REALLY belive in it; Al Gore doesn't use the pennies difference "green" energy that his utility company offers... But President Bush DOES!

Why, oh why must misrepresentation be such a big part of issues? It takes a big ego to believe what we are doing is affecting the planet or at least a big ego to say "case closed," global warming is a fact.

Benning,
The Number One Threat to Planet Earth is Global Climate Change, known to you and I as 'Global Warming'.

Oh, puleeze! Those who know me already know what I thinkg the big threat is.

So, you got by with your SAT's by the skin of your teeth? College Board promotes the SAT's as predictor of success in college, but I've seen evidence to the contrary. Personally, I'd say that the ACT is a better predictor. On a different thread at my blog, we discussed the leftist slant of the essay prompts. Go to the comments HERE; the discussion is toward the last 1/3 of the comments section. I just know you'll be interested!

gayle: Thanks! When you gonna get DSL?

brooke: Gore is a classic hypocrite. He sees no problem in the "do-what-I-say-not-what-I-do" school of Leftist thought.

b.u: I think we all have that in us. The difference is that I think we tend to keep our minds open to new facts. The Left has their minds carved in stone.

aow: "Oh, puleeze! Those who know me already know what I thinkg the big threat is."

What I remember most about the SAT - taken in the early 70s - is the sheer boredom! As a poor math student, imagine my surprise when my Math results were higher than my Verbal results! The reading section was dull beyond comprehension.

The education industry has been a leftist center since the late 1800s. We won't change it. But we can raise a cry whenevr they get heavy-handed.

I can't imagine how you out up with ducky, aow. He's such a pill! (The clean version of the word I was thinking of!)

Fascinating subject and way too much controversy among scientists eh?..thanks so much for the link hun!..:)

I did well on my SAT's too, much to everyone's surprise; I was a very lazy student...

Where I live DSL isn't an option, Benning. They say maybe they'll have it out hear in a year or two! And the people in town who have it aren't happy with it! I'll be checking into satelite soon.

"I think you will be very surprised at just how much the experts, media, and politicians have lied and hidden in their rush to Socialize the world."

Problem is, these so called experts they claim to have, aren't Climatologists. They can't seem to get any of the real top experts to share their warped view of reality. They maintain wingnuts like Suzuki, who's a bloody biologist that's been licking to many frogs.

I don't watch the alphabet networks anymore and haven't for some time. At least not the news or "news shows" they feature...is it any wonder why I would stay away when this is the type of programming they show?

Hey, thanks for the blogiversary wishes and the linkage, benning!