Have you ever heard of the Chelsea Milling Company? Think hard! No? What if I tell you that the company is located in Chelsea, Michigan, and has been there for over a hundred years? Any idea? What about a "Little Blue Box"? Anything yet?

Okay! I'll let you in on the secret. The Chelsea Milling Company makes "Jiffy" Baking Mix, among many other baking mixes. Recognize the "Jiffy" name? I'm very familiar with it. I buy the baking mix regularly, and the Muffin mixes now and then. Why? Because "Jiffy" is a good product! And the price is the best. The first box of "Jiffy" Baking Mix hit the store shelves in 1930. That's a long time.

When I was growing up, my mother would buy Aunt Jemima Pancake Mix, and Bisquick Baking Mix. After a while the Aunt Jemima disappeared since the Bisquick did a fine job at pancakes. But Bisquick was the staple for our family. And that's what I liked ... until I was out on my own. And then, money was a primary concern (not nearly enough money!), and quality was a lesser concern. 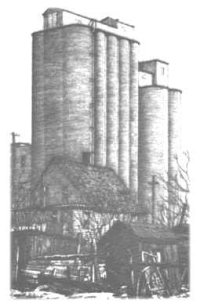 Now, when I went shopping for "Bisquick", I also saw "Jiffy" Baking Mix alongside. And the price was lower. Now, a box of baking mix is going to last a while, isn't it? So switching brands, even for a single time, is taking a leap of faith, if you will. At the least it's chancy. But I tried it. And guess what? It's as good, if not better, than "Bisquick" to me. So I stuck with it.

And I found the Corn Muffin Mix, too! And that's pretty good. Pie Crust Mix, Cake Mixes, and so on. All of them quality, tasty, inexpensive mixes that are easy to use. And that's important for me. Because I have never been able to afford to just toss a cooking mistake away.

So what's the story here? Is this just benning's pitch for a food?

No. The Chelsea Milling Company is a success story that you should recognize. The Holmes family has owned it since 1901. A former Indy car driver, Howdy Holmes, is the present President and CEO. He's also the grandson of Mabel White Holmes, the lady who invented "Jiffy" Baking Mix in the first place! As she said later, "The mix is so simple, even a man can do it." Yes, I can!

So, what's the secret? Well, for one thing, the company is vertically integrated. Alright, that's probably business jargon, but the meaning is simple: they do it all. As the "Jiffy" web site puts it:

Chelsea Milling Company is a complete manufacturer. We store wheat. We mill wheat into flour. We use that flour for our own mixes. We make our own "little blue" boxes. We do it all-that's why our mixes provide you with the best possible value.

Now you get it. The wheat comes in and is stored at the company, they mill it into flour, prepare the mixes, and package them in the boxes they aslo have made, printed and cut at the plant. So the prices they charge are lower than other manufaturers of baking products.

But there's another reason they have low prices, one you may not be aware of. They don't spend a penny, not a single penny, on advertising. "Jiffy" doesn't advertise! They rely on word of mouth, and name recognition at the store. And, folks, it works! "Jiffy" has captured about 65% of the market for lower-cost mixes, and over 50% of the overall market for such baking products. And all of it on not a single advertisement!

Granted, you may see "Jiffy" products advertised in the weekly store flyer. But that's the store's advertising, not "Jiffy's". They also have a website, and that probably costs the "Jiffy" company a few dollars to run. But aside from their own manufacturing costs, and the cost of transport, they spend little outside the making of the "Jiffy" brand products. Wouldn't it be nice if the Federal and State governments could be that efficient! And it's genesis was so typically American. From the "Jiffy" web site via the Ann Arbor News:

"It all started with one sorry-looking biscuit.

One day, when Holmes' father and uncle where just boys, they brought a friend home for lunch. The lad, who lived alone with his father, left his own sack lunch with Mrs. Holmes. While he dined on the repast she had prepared, she snuck a peek into the boy's lunch and saw the worst looking biscuit she had ever seen in her life.

Right then and there, Mabel Holmes vowed to figure out a way to reduce the art of biscuit making to a task so simple that even a man could master it. After two years of trial and error, she had come up with a solution and decided to call it Jiffy Mix.

If you visit the "Jiffy" web site you can order a free recipe booklet, arrange to tour the plant, find some recipes! There's a page where you can find which stores in your area carry which products. If you haven't tried the "Jiffy" products before now, why not give them a shot? Why, they even have a Brownie Mix!

From the Michigan History Magazine: Mabel's Magic Mixes
From the Detroit Free Press (1967): She Discovered How to Make A
Fortune in a "JIFFY"
From the Michigan is Amazing website: Learn about the Chelsea Milling Company in a Jiffy
Posted by benning at 8:26 PM

Heheheee! You folks oughts be in bed!

I'm gonna see what the Wal-Mart has on the shelf.

And their Apple-cinnimon muffin mix... Mmmmmm.

The baking mix is good, and economical, too! The only time I get Bisquick anymore is if it is on sale and I have a coupon, so not very often.

Jiffy just goes to show how great capitalism is, too. Offer a great product at a great price, and you're bound to stay in business.

And I thought my blog was eclectic. :)
That was a most enjoyable read.

Patrick, I post on whatever strikes me at the time. LOL

Jiify just happened to be it!

Cool, Benning. Yes, somehow I managed to get here again!

That was a most enjoyable read, especially for me as I am really a good cook but can't make a decent biscuit from scratch for the life of me. I've used Jiffy for a very long time, but never before knew the story behind it, or the way they do everything themselves.

Okay, here is how you make the corn bread/muffins. You use one box of Jiffy corn bread mix and one box of Jiffy yellow cake mix. Blend together the two mixes, using all the ingredients each calls for and then split the difference on time and temperature. Serve that with a nice bowl of chili and you've got an EXCELLENT cool weather meal!

The corn bread comes out a little sweeter, a little taller and a lot less crumbly. My mama taught me that one.

I am gonna remember that one! Yum!

I LOVE Jiffy's corn-muffin mix. My aunt let me in the secret some three decades ago. Every time I fix chili or pork and sauerkraut, I whip up some of Jiffy's cornbread. Yum!

Man, that was excellent! What an enjoyable read... it took me back to my days as a little kid watching my sweet grandmother build cornbread muffins. I love to cook, but Jiffy was the only way I could bake up anything reliably. My wife is Asian and we don't eat much good, old fashioned American stuff. She loves chili however and the days are cooling off... I'm going to whip her up some muffs to go with my super hot, rip-your-face-off chili!

Yeah, Chili and cornbread! Yum! Gonna use Anna's recipe, too. All that and a few cold beers .... mmMMMmmmm!