A Star Who Fell 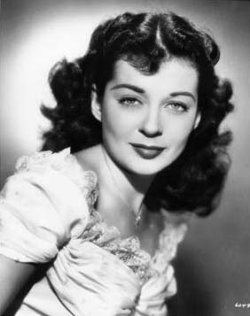 On August 26, 1961, in a small Los Angeles apartment reportedly strewn with empty vodka bottles, a woman was found dead. Her death was attributed to an alcohol-induced heart attack. Looking middle-aged due to the effects of years of alcoholism, the woman was a mere 36 years old. She had been an actress once, a woman of rare beauty whose stage-fright and overwhelming shyness had led her to still her nerves with liquor. She was Gail Russell.

Here, a confession: I fell in love with her the very first time I saw her on the big screen (actually the little T.V. screen, but you understand, I'm sure), and she remains one of my favorite film stars. 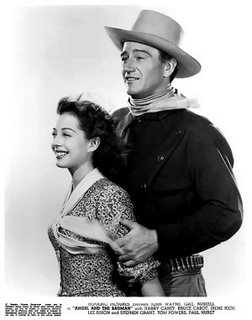 I first saw Gail Russell in a John Wayne film called, "Angel and the Badman", a western with such film luminaries as Harry Carey Sr, Bruce Cabot, and John Carradine. She was the most beautiful woman I think I had ever seen. She had a delicacy of look and movement that was captivating, a sweet voice. What I didn't know was that her delicacy was not an act. Gail Russell was fragile woman, already falling apart from her growing reliance on alcohol to steady her nerves.

Russell was a Chicago girl, a Windy City native until the age of 14, when her family moved to Santa Monica, California. No 'pretty face' alone, Gail was an above-average student. But she was, indeed, a pretty face, too. So pretty that upon her graduation from Santa Monica High School, Gail Russell was signed to a contract by Paramount Studios. She was painfully shy and had no acting experience, but she photographed well enough for Paramount to offer the standard seven-year contract. 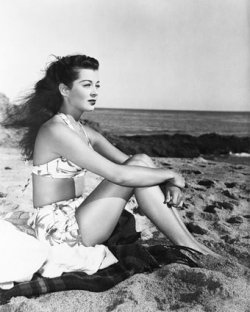 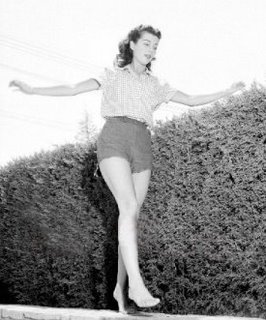 There was about her a sweet quality, a girl-next-door aura, that belied a natural acting talent and hid her problems. On-screen, this young woman had little of the power of Joan Crawford, none of the blatant dangerous sexuality of Jane Russell. Those things were not her screen persona. And they were not a part of her private personality either. Privately she was insecure, frightened, depressed. For her alcohol became the crutch, the prop, the confidante. And alcohol betrayed her, as it will do to anyone who relies on it for answers.

"John Wayne had been made a producer at Republic. This was how Herbert Yates, head of the studio, placated his superstar as he watched him being courted by the other studios. James Edward Grant, who now began a long association with Wayne, was to write the screenplay of the first John Wayne production for Republic, he was also to direct it. Gail Russell, a voluptuous young actress with dark hair and an aura of powerful grace played the Quaker girl who converts John Wayne, a gunfighter and criminal, to a peaceable life. She may or may not have converted him to other activities as well. Wayne did not want to play Quirt Evans. He tried to get Gary Cooper and Randolph Scott but they had other commitments, so he had to do it himself. 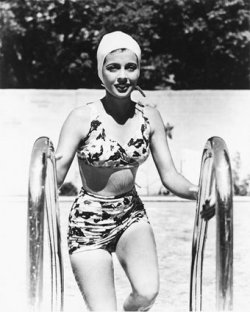 During the filming of Angel and the Badman , Duke's young co-star developed a full-blown crash on her leading man. Duke tried to help her as he had helped other novices, by being gentle, patient, and kind. He loaned her the down payment on a car while she waited to collect her first check. When he realized she'd fallen in love with him, he asked his secretary, Mary St. John to "set Gail straight. Make sure she understands how I feel, but do it gently," he said. "The poor kid's having a tough time." Within a few months she had recovered from her school girl crush and married someone else. She and Duke remained friends and they co-starred in Wake of the Red Witch in 1949. She was a raven-haired beauty whose fragile appearance mirrored an even more fragile psyche. She started every day's shooting weak with terror, throwing up in her dressing room before appearing on the set. Like many other performers over-whelmed by stage fright, Russell began to find courage in a bottle.


John Wayne's wife at the time was, Esperanza "Chata" Bauer, a former Mexican actress. She convinced herself that Duke and Russell were having an affair. The night the film Angel and the Badman wrapped there was the usual party for cast and crew, and Duke came home very late. Chata was in a drunken rage by the time he arrived, and she attempted to shoot him as he walked through the front door. As the bullet whizzed past his head he suddenly saw Chata as she really was, not as he'd hoped she'd be. Instead of marrying the heroine of his romantic fantasies, he realized he'd married the woman whom Ray Milland had labeled, "a Mexican whore." 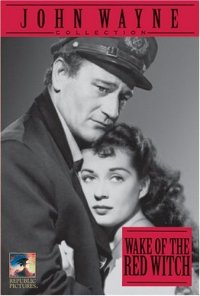 The next day Chata begged him to forgive her. She swore she would change, stop drinking, and start acting like a real wife. She spent the following week weeping and moping around the house. Duke was helpless in the face of all those tears, so he agreed to a reconciliation. Chata kept her promise as long as she could. Then her old habits reasserted themselves and she began to drink heavily with her mother, who lived with them. Duke banished Chata's mother to Mexico, sobered his wife up, and asked for a divorce. Chata turned on the tears again. Now the marriage had a pattern, one Duke couldn't seem to break. Chata would go on a binge, she and Duke would fight, they'd make up, and Chata would celebrate their reconciliation by having a few drinks and then a few more, and the whole cycle would begin again.

Like so many of his pictures Wake of the Red Witch had off-screen implications even more dramatic than the film story. When Chata found out that his co-star was once again to be Gail Russell, one can imagine that the stormy seas on the home front matched or exceeded those threatening the ship Red Witch on the screen. Looking at Miss Russell's delicate beauty, it is easy to believe that in the story she becomes fatally ill and welcomes death as a release from a tormented marriage. It is not as easy to accept that, in real life, she was even then caught in the throes of personal uncertainties and demons that would lead to her death from alcoholism in 1961."

The sad thing about her is that she had talent, and the promise of a great film career. And lost it to an addiction; an addiction she did not choose, nor probably grasp until it was too late. Her fight to free herself failed. She made too few films to be ranked among the greats of Hollywood. I prefer to remember Gail Russell as a Star, one who fell hard, and disappeared. The loveliest actress to ever grace the screen. 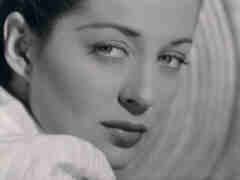 Such a sad, sad story and not so rare for the era. Alcoholism is a terrible thing.

what a stunning tribute..I will link to it Benning..:)

I have to tell you, I was just looking for pictures of stars. Y'know, Hubble telescope stars. And Hollywood pics kept coming up. When I saw all the Jane Russell pictures I wondered why Gail didn't have as many. So I went looking, and that moved me to post.

Not the first by any means. I'm sure you remember River Phoenix. This kid had an extremely bright future ahead of him. He had the looks (at least according to my daughter), talent and a screen presence. Alcohol was a contributor but it was cocaine that did him in.
An alcoholic can continue for often long times but most cocaine addicts hit bottom in just a few short years-if that many.
I'm not even going to start on all those musicians who weren't ready for the pressures on the road...well except one...Jim Morrison
Morrison was experimenting with everything from Nietzsche to the bohemian underworld of California.
He was absorbed by his music and adored by his fans...even long after his death.

PS...I also enjoy checking out pictures taken from the Hubble telescope. At one time NASA planned another Hubble Mission but this time putting the telescope on the other side of the moon.
How amazing that would have been.
Back here on Earth, they have established the VLT(Very Large Telescope..lol) that is capable of even more complex pictures then the Hubble.
I know it is in South America, either Peru or Chile.
I also noticed your tribute to Robert Heinlein. I used to love reading his books. Stranger in A Strange Land and his Methuselah's books were well before his time.

Dammit, I should not have started on this subject. It was in the book "The Number of the Beast " that I first saw the word floxcinocinehilipilificator. Forgive me if I misspelled..lol

Of course I then had to try to find that word and failed! I recall it, but not the meaning or spelling. Sheesh!

American Crusader:
I read "The Number of the Beast" years ago, but I don't remember that crazy word...what's it supposed to mean?

What a waste. Lots of tidbits there. I did not know about Wayne's "Chata."

Great story and tribute ... thanks for this. I never even knew anything about this person.

I tried looking it up, but ended up trying to find it in the Oxford English dictionary.
Correct Spelling:
floccinaucinihilipilification- an act or instance of judging something to be worthless or trivial

It was also used in a GEICO commercial.

American Crusader:
Hmmm...well, I judge that word to be worthless or trivial, then. So in that case, I guess I'm guilty of floccinaucinihilipilification.
(Who'd have thunk it?!)

Thanks for the edification!

"floccinaucinihilipilification"! Riggghhht! Who can even pronounce it? LOL! I learn the strangest things by blogging. :)

That was a good read, Benning. A bit sad, but a good read just the same. I don't think I saw those two movies, so I'm going to order them from Net Flix. I love John Wayne movies. I don't remember ever hearing of Gail Russel, so I'm curious, after your wonderful discription of her, to see what she looks like.

Angel and the Badman is the better of the two. Ahhh, listen to her voice, watch how she reacts to the others onscreen. There's a picnic in the hills, with the congregation. A short scene. Very fine photography and direction there.

Lemme know what you think of the flick!

What a waste. It's too bad that we have such an addictive natrure... It 's just a different thing for each of us.

Interesting Benning. I know who she was, I can remember her in some of the Dukes films. Beautiful woman for sure. I never knew much about her just what I see on the tube as I don't pass on many John Wayne flicks. Very sad to say the least.