Time Is Running Out! Help! 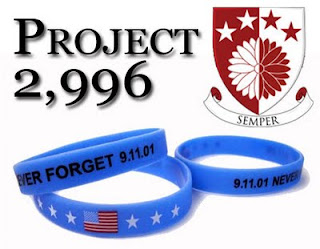 Project 2,996 needs your involvement! Please hurry over, sign up, and post a tribute to one of the victims of 9/11 whom you'll be assigned. (is it who? *shrug*) Since D.C.Roe moved to his wordpress site I think many former tribute posters either lost touch or simply forgot about this annual event.

And now, more than ever before, we can use the reminder that innocent people were slaughtered on the altar of Islmaism on that horrible day eight-years-ago. Why now more than ever?

The Obama administration, through its acolytes and myrmidons, is attempting to co-opt the memory of 9/11 to push its Leftist, and as usual, squirrely, agenda and continue the spiral down the Memory Hole of our history. Not to mention the history of Islamist butchery.

It isn't enough that nearly 3,000 of our fellow citizens were killed in a co-ordinated terrorist assault for the sake of a Death Cult. No, eight years afterward the Leftists want to turn the memory of that event into a National Day of Service. What's wrong with that? I'd suggest that with 365 days in a year there are more choices for this kind of silliness to promote Service. Choosing 9/11 is a cynical, calculated attempt to erase the reality of the attack. Indeed, why not pick 9/12? Wouldn't that be more useful? More respectful?

A lot of nice, well-meaning folks will join in this Day of Service. That's all well-and-good. But the choice of 9/11 is not all well-and-good. It's a slap in the face to those who know precisely what kind of enemy of humanity the Islamists are. Changing the focus of 9/11 is wrong. Period.

The idea of establishing 9/11 as a National Day of Service was first conceived in 2001 by the founders of MyGoodDeed, a nonprofit started by friends and relatives of 9/11 victims. They are working with ServiceNation, the National September 11 Memorial & Museum, the Corporation for National and Community Service and New York Cares.

In April, Obama authorized the establishment of 9/11 as a National Day of Service when he signed into law the Edward M. Kennedy Serve America Act.

Thursday's news conference was held just hours before the late senator's body left his Hyannisport, Mass., home for a series of memorial rites followed by his funeral Saturday. Kennedy, who died Tuesday of a brain tumor, had co-sponsored the bill.

Yeah, let's memorialize Teddy by diminishing the impact and meaning of the 9/11 memory.

Perhaps you don't think there's anything political in this maneuver? It's simply a positive way to move America onward? From Redstate.com:

What day? Our US Senators return to DC the Tues after Labor Day. That next FRIDAY, Sep 11, is Patriot Day, designated in memory of the nearly three thousand who died in the 9/11 attacks.

All 50 States are coordinating in this – as we fight back against our own Right-Wing Domestic Terrorists who are subverting the American Democratic Process, whipped to a frenzy by their Fox Propaganda Network ceaselessly re-seizing power for their treacherous leaders.

Nothing political in that, is there?

You can read the articles, do some searching yourself, for more about this. But if you can spare the time - please make the time! - signup with Project 2,996. It's worthy. And there is nothing political in this project. Pay tribute to the victims of 9/11 only.

Will you help us out?


Articles and blogs discussing this Project, or the 'Day of Service':

And So It Goes In Shreveport