“Oooh. Van Jones, alright! So, Van Jones. We were so delighted to be able to recruit him into the White House. We were watching him, uh, really, he’s not that old, for as long as he’s been active out in Oakland. And all the creative ideas he has. And so now, we have captured that. And we have all that energy in the White House.”
~ Valerie B. Jarrett ~ Senior Advisor and Assistant to the President
for Intergovernmental Affairs and Public Engagement 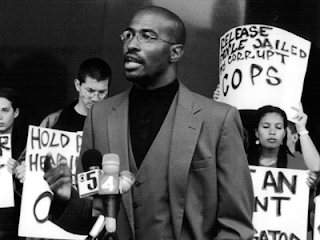 Special Advisor for Green Jobs, and noted Leftist oddball, Van Jones is out. The Watermelon - Green on the outside, Red on the inside - dogged by the recent revelations of his rude, racist, impolitic remarks, has been eased out of the Obama Administration. The wheels on the Obama bus are getting redder and wetter.

"On the eve of historic fights for health care and clean energy, opponents of reform have mounted a vicious smear campaign against me. They are using lies and distortions to distract and divide"

Jones was certainly a plus for Conservatives and Republicans. His past political activities - a radical Leftist - and recent pronoucements on Americans in general and Republicans in particular - were excellent fodder for those who have tried to display Obama's Leftist proclivities, in his actions and his appointments.

WASHINGTON, DC - Van Jones, Special Advisor for Green Jobs at the Council on Environmental Quality resigned today. Below is the text of his resignation letter, sent to Chair Nancy Sutley:

"I am resigning my post at the Council on Environmental Quality, effective today.

On the eve of historic fights for health care and clean energy, opponents of reform have mounted a vicious smear campaign against me. They are using lies and distortions to distract and divide.

I have been inundated with calls - from across the political spectrum - urging me to "stay and fight."

But I came here to fight for others, not for myself. I cannot in good conscience ask my colleagues to expend precious time and energy defending or explaining my past. We need all hands on deck, fighting for the future.

It has been a great honor to serve my country and my President in this capacity. I thank everyone who has offered support and encouragement. I am proud to have been able to make a contribution to the clean energy future. I will continue to do so, in the months and years ahead."

NBC noted, in its article regarding Jones' resignation:

Jones, Obama's green jobs "czar," was caught on tape in an expletive-packed rant, directly attacking Republicans in the Senate who he said abused their majority position in the past to push legislation through. He told Politico after the statements were released that the comments were "inappropriate" and "offensive."

Ahh, but he made them. And they weren't from 20 years past, either.

As the Chicago Daily Observer says:

World Net Daily's reporter Aaron Klein broke the story and relentlessly pursued it, revealing Jones who was identified as a self-described radical communist and "rowdy black nationalist" who said his environmental activism was actually a means to fight for racial and class "justice":

Jones previously served on the board of an environmental activist group at which a founder of the Weather Underground terrorist organization is a top director.

That Jones and other White House appointees may have been screened by an ACORN associate.

One day after the 9/11 attacks, Jones led a vigil that expressed solidarity with Arab and Muslim Americans as well as what he called the victims of "U.S. imperialism" around the world.

Just days before his White House appointment, Jones used a forum at a major youth convention to push for a radical agenda that included spreading the wealth and "changing the whole system."

Jones' Maoist manifesto while leading the group Standing Together to Organize a Revolutionary Movement, or STORM, was scrubbed from the Internet after being revealed by WND.

Jones was the main speaker at an anti-war rally that urged "resistance" against the U.S. government – a demonstration sponsored by an organization associated with the Revolutionary Communist Party.

In a 2005 conference, Jones characterized the U.S. as an "apartheid regime" that civil rights workers helped turn into a "struggling, fledgling democracy."

Jones signed a petition calling for nationwide "resistance" against police, accusing them of using the 9/11 attacks to carry out policies of torture.

Yeah, it's the evil Right-Wingers who have done this to Van Jones. Not the self-serving Commie who enjoys hurling racist epithets. Pffft!

In the end, no matter the political fallout from this, the country is better off without Van Jones in a government position of any kind.
The Weekly Standard gives you an excellent view of this man. In its article, "Van Jones Joins the Global Struggle Against America", The Standard notes:

"Who's the real terrorists? Uncle Sam." That according to a record put out by Freedom Fighter Music, a label created by the Ella Baker Center for Human Rights, which Van Jones founded. There are a number of different voices on the record, including that of convicted cop-killer Mumia Abu Jamal and Van Jones himself. One of the voices accuses the United States government of "Fighting terror with terror, bombing babies in the night." And then Van Jones appears for his cameo (at the 3:50 mark). Jones rants against the "Israeli occupation," calls for the right of return of the Palestinian people and then puts himself squarely on the side of America's enemies: "This is now a global struggle against a U.S.-led security apparatus and military agenda that impacts people here, it impacts people around the world, and I think that we need to see our problems as linked."

Read the article and watch the video.

In the meantime be happy that at least one Ecoweenie Leftist is gone from the White House. As Martha Stewart likes to say, "It's a good thing."

Despair not, Leftists. The "O" still has his acolytes. And his friends.

Meredith Jessup on the resignation.

Jonah Goldberg: "The Washington Post is on the case."

Mark Steyn writes about ol' Van: "Both of the Above"

Michelle Malkin has stuff, too!