You Can't Make This Stuff Up

From Fox, this slice of life: 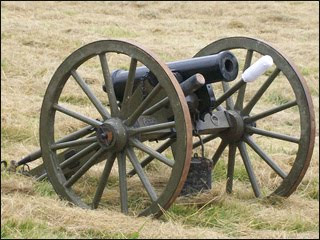 UNIONTOWN, Pa. — A Pennsylvania history buff who recreates firearms from old wars accidentally fired a 2-pound cannonball through the wall of his neighbor's home.

Fifty-four-year-old William Maser fired a cannonball Wednesday evening outside his home in Georges Township that ricocheted and hit a house 400 yards away.

The cannonball, about two inches in diameter, smashed through a window and a wall before landing in a closet. Authorities say nobody was hurt.

No one answered the phone Friday at Maser's home. He tells WPXI-TV recreating 19th century cannons is a longtime hobby. He says he is sorry and he will stop shooting them on his property, about 35 miles southeast of Pittsburgh.


From a link at Gina Cobb!

I guess that's how the ball bounces, eh?

By the way: It's International Bacon Day! Whoo-Hoo!
Posted by benning at 11:24 AM