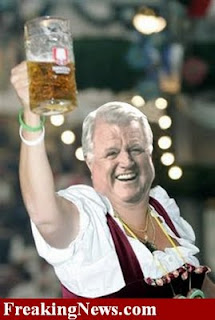 "Edward M. Kennedy, the iconic “liberal lion” of the U.S. Senate and reigning patriarch of a legendary family political dynasty, whose advocacy of social issues left an indelible stamp on a half-century of American politics, died of brain cancer Tuesday night at his Cape Cod, Mass., home. He was 77.

The youngest son in a family of wealth and privilege, Kennedy was a staunch liberal voice in his four decades in the Senate who often rallied his fellow Democrats, but he also built unlikely alliances with Republicans to pass milestone legislation on education, health care, voting rights and the minimum wage."

“Ted” Kennedy, as he was universally called, had his own unsuccessful run for the presidency, a position he seemed destined to hold. He was dogged by scandal after the 1969 drowning death of a young woman, Mary Jo Kopechne, a former aide to his brother Robert, in Kennedy’s car in an accident on Chappaquidick Island, Mass.

I'm sure many will rain praise upon the dead Senator. I will not, merely noting his passing.

Make of that what you wish.

Note: I expect Obama, and the rest of the Dems, to use this man's death to promote their Socialist Agenda. It won't surprise me at all to see them use his funeral (as they have used Democrat funerals in the past) as a form of political rally, rather than a dignified ceremony marking this person's death. The socialist programs proposed by the Obama administration, and the Dems, will be touted as a "Tribute" to the 'Great Man' the Leftists touted as the "conscience of the Senate".

Expect the Leftist myrmidons of the MSM to fall into line. The encomiums of Ted Kennedy will be almost non-stop. This is the enshrinement of a Liberal Saint.

We'll be spoon-fed the 'historic accomplishments' of this man; the failures and abyssal weaknesses will be ignored or glossed over. Obama will see his poll ratings rise.

This is a boon to Obama and the rest of the Socialists in his administration. Not so much for America.

Ted Kennedy was the poster boy for redemption by liberal politics -- the sense that many on the left have that no matter how badly they behave personally, they have a claim on virtue because they support liberal policies. By mobilizing the power of the state to take money away from some to cater to the needs of others, they suddenly become great humanitarians.


Even the liberals on MSNBC this morning are framing their eulogies in temrs of Teddy's battle with his dark side (and concluding that in the end light won because he got the government to spend a lot more money).

But Ted Kennedy faces a Judge far more powerful than any pundit, or indeed the electorate now. What any other mortal thinks of him now is irrelevant to his fate.

"Mary Jo Kopechne could not be reached for comment." - James Taranto

Update: From Michael Graham comes this commentary (read it all):

All these things are true about Sen. Kennedy.

And so are these:

Sen. Kennedy was wrong about virtually every major public policy issue of his career.

Confederate Yankee has a little to say:

"Ted Kennedy is dead. I will not miss him."

Bookworm Room has some links worth perusing. :)
Posted by benning at 8:37 AM

Hi,Benning, its been a while.

So far I have avoided mentioning him on my site, but you might like the tribute Ben and Bawb's blog gave him.

Right now Mary Jo’s family is celebrating. Somehow, I don’t think ol’ “Ted” makes it into Heaven…but of course, that’s not for me to decide; I suspect that I’m correct, though.

In addition to the long laundry list at the blog linked above, let us not forget his "Abu Ghraib: under new management" treason...

Camo: Now we wait for Byrd to fly to his reward, right? 'Course he'll get lost, just as he does on the Senate floor, these days.

Camojack; this reminds me of a snippet of conversation at work some time ago:

Are you coming for a beer Bluey?

Am I coming for a beer, are Kennedys gun shy?

If such there breathe, go, mark him well;
For him no Minstrel raptures swell;
High though his titles, proud his name,
Boundless his wealth as wish can claim;
Despite those titles, power, and pelf,
And, doubly dying, shall go down
To the vile dust from whence he sprung,
Unwept, unhonour'd, and unsung.

Actually it is eerie but the word verification I have been asked for is evallyst.

benning:
"Now we wait for Byrd to fly to his reward"?

Just so that I could see for myself, I watched all of Kennedy's funeral rites -- the ones that were televised, I mean.

I watched the groundwork laid for the politicization of Kennedy's agenda for health care. In fact, one of the young nephews offered a prayer for the realization of public health care. A prayer!

I noted that BHO didn't attend the burial service at Arlington National Cemetery. Interesting. What was that all about, so that he can later claim that he didn't politicize the death of the Admiral of Chappaquiddick? Probably.