Paul Newman has died after battling cancer. He was 83. The Houston Chronicle reports:

Paul Newman, a major figure in American cinema who created indelible characters for more than half a century, died Friday at his home near Westport, Conn., after a lengthy battle with cancer, publicist Jeff Sanderson said. He was 83. 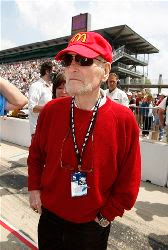 In this May 10, 2008 file photo, actor Paul Newman watches from the pit area during practice for the Indianapolis 500. (AP Photo)

Newman's first movie, The Silver Chalice (1954), was an embarrassment, but he was lauded for his portrayal of the boxer Rocky Graziano in Somebody Up There Likes Me two years later.

He chose roles wisely. Among his highly regarded films are Cat on a Hot Tin Roof and The Long, Hot Summer, both of which were released in 1958. He made some of his biggest hits in the 1970s, including The Sting, in which he starred with Robert Redford, and The Towering Inferno.

As a young actor, the charismatic Newman never exhibited the soul-baring intensity of Brando or Dean — to whom he was sometimes compared — nor the unguarded vulnerability of Montgomery Cliff.

"He seems to me an uneasy, self-regarding personality, as if handsomeness had left him guilty," the critic David Thomson once wrote of Newman. "As a result, he was more mannered than Brando when young, while his smirking good humor always seemed more appropriate to glossy advertisements than to good movies."

The camera, however, loved Newman and so did movie audiences. His appeal clearly went beyond looks.

Writing of his role as a cad in Hud in 1964, the New Yorker's Pauline Kael wrote, "They could cast him as a mean man and know that the audience would never believe in his meanness."

Continuing, Kael said Newman was the type of actor who projected "such a traditional heroic frankness and sweetness that the audience dotes on them, seeks to protect them from harm or pain."

Newman received nine Oscar acting nominations and won once — in 1987 for his performance as Fast Eddie Felson in The Color of Money. The film was Martin Scorsese's sequel to The Hustler, the 1961 drama for which Newman received his second Oscar nomination and one of several roles for which he shall be forever remembered.

Additionally, Rachel, Rachel, a film Newman directed in 1968, was nominated for best picture. He also received two honorary Oscars, once in 1986 for his body of work and again in 1994 for his humanitarian efforts.

The Color of Money was widely seen as inferior to The Hustler, but it demonstrated that Newman seemingly had grown more relaxed in a face and body that, while still strikingly attractive, no longer looked as if they had been sculpted by Michelangelo.

Arguably, Newman did his best work in middle age and beyond, in films such as Money, The Road to Perdition (2002) and, especially, The Verdict (1982), Sidney Lumet's drama (from a David Mamet script) about an alcoholic lawyer past his prime who must try the case of his life. 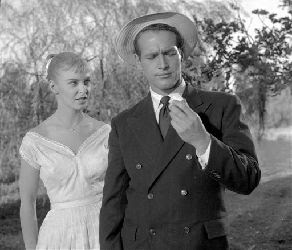 Newman got his start in theater and on television during the 1950s, and went on to become one of the world's most enduring and popular film stars, as well as a favorite of his peers. He was nominated for Oscars 10 times, winning one regular award and two honorary ones. He is survived by his wife, actress Joanne Woodward.

I always enjoyed Paul Newman on the Big Screen. His political opinions were typical Hollywood, and not worth remembering. Actors do age and pass on, but it seems the greatest are never really replaced. Thus we lose some fantastic talents every year, it seems, while no one appears able to pick up thier mantle.

Butch Cassidy: Then you jump first.

Sundance Kid: No, I said.

Butch Cassidy: What's the matter with you?

Butch Cassidy: Are you crazy? The fall will probably kill you.

"Rules? In a knife fight? No rules!" - Ted Cassidy

Click here for the final scene from Butch Cassidy & the Sundance Kid.

Email ThisBlogThis!Share to TwitterShare to FacebookShare to Pinterest
Labels: Artists, Opinion, Stuff and Such

Always enjoyed watching Paul Newman in whatever role he played.

Oh no! This is the first I've heard of this, Benning. He was one of my favorites! :(

You did a great memorial post to him though. Thank you.

He was one of a kind.

He was a good actor but I am somewhat puzzled about why he apologized for his part in The Silver Chalice.

I'm of the 'younger' generation and even *I* loved the acting of this man! AND his respectable morals!

I always confused Heston, Newman and Mcqueen for some reason.... the other day I watched "LeMans" just out of curiosity and I swear I thought it was Newman.... Call it actor myopia...