My Moments With Obama

Yesterday, a little before 1:00 PM, as I was heading home from work - a three-mile drive of maybe 15 minutes duration - traffic ground to a halt at the intersection of Missouri Avenue and West Bay Dr. I wondered what the hold-up was about. I could see a few flashing lights through the windshields of the cars ahead, but nary a siren was wailing, and no smoke was rising from the intersection. Couldn't be an accident. At least not much of one.

One fellow in an SUV, ahead, got out and walked toward the intersection. He came back and spoke to the driver of the car next to his, then shrugged. I guess he didn't know what was going on ahead, and his short jaunt hadn't informed him. I waited, and wondered why the right lane wasn't turning to get out of the jam.

Now, since I was in the right lane, I impatiently waited for the cars ahead to either move up or turn into the parking lot of the store there. I'd just follow them in, pass around behind the store, and turn right onto West Bay and take the back route home. Cars were trying to edge to the right, so I knew others had the same idea. What the heck was going on?

Finally someone got the idea of escape, turned into the CVS lot, and the others followed - not always safely! What is wrong with some people? - and I finally made it up to the entrance and turned in, followed the truck ahead of me around the back of the CVS, and around to the West Bay Dr. entrance. Those ahead of me were turning right onto West Bay and escaping the stopped traffic. I got to the entrance and saw a cop car sitting in the middle of the road near the intersection to my left. The cop, in bright orange vest, waved and pointed at me.

I stopped. I ain't no fool!

He approached me, all the while turning his glance to the east, up East Bay. When he got to the side of my car he said, "You'll have to stay right there for a few minutes, sir."

"Barack Obama's motorcade is coming through and they want to keep the street clear."

"Okay," I said, and nodded. Well, at least here I was at the front of my own line, so I could see what was going on. And cars were lining up behind me, including one snot who insisted on honking the horn every few seconds. Guess he told me, huh?

The cop turned away, heading back to the middle of the road, then called over his shoulder, "They tell me it's about two minutes more."

I guess he must've thought a bit on how I looked - in my sweat-stained Wal-Mart-blue work-shirt - and decided to make sure. He stopped and looked at me, calling as he pointed at me, "If you take off, I'm gonna find you."

"All right," I answered him, "just bring some beer!"

He turned away, then looked over his shoulder at me, smiled, and yelled, "I wish I could!"

About two minutes later the whine of sirens rose from the east. Flashing headlights could be seen, grew closer, and a motorcade became visible. Cars flashing their lights, and a big bus with its headlights lit, then more cars behind. Loud sirens as the cars ahead zipped past me, heading west toward the beach. The motorcade went past fast - they were speeding, by the way! The limit is 30 mph through that stretch of road and they were going much faster! - and all I could see was darkened windows. *shrug*

And just like that the Obama motorcade had passed through downtown Largo. Where had they been? Dunno. Where were they heading? Dunno.

That cop waved me out and I took off, following close behind the motorcade's tail. I thought for a moment how unsafe that position was. But in a moment I was at the next big intersection and I turned south (the motorcade had turned north). My Obama moment was over. 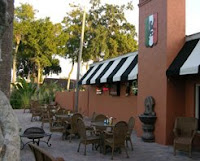 Note: It turns out that Obama was heading for lunch in Clearwater, on Tuesday. He dined at O'Keefe's, which is a nice Tavern and Grill that my folks and I enjoy. The Shepherd's Pie is to die for! O'Keefe's sits right across the street from the famed Morton Plant Hospital. I wonder how the traffic there was. 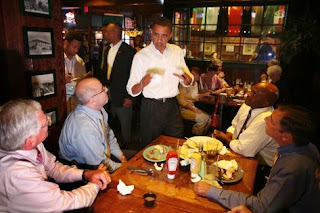 It is reported that Obama ordered a Cheeseburger to go, then worked the lunch crowd for about an hour. A cheeseburger in an Irish Pub? I'm sure O'Keefe's makes a mean cheeseburger, but, come on! At least get the Fish and Chips! I doubt he had any of the fine beers, but probably ordered a glass of water. Sheesh! 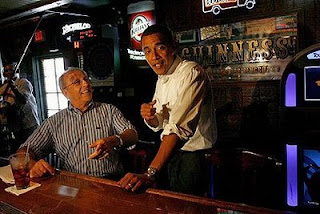 Does this look posed?

Well, when you're campaigning, it probably isn't a good idea to quaff a pint of Guinness as you talk in public, huh? I'll give him a pass on that, but a cheeseburger?

Obama Gets A Burger In Clearwater

At least he didn't try to order tofu.

I saw Dole go through my community in 96, A man much more worthy than the Obamination will ever be.

I actually shook Nixon's hand when he campaigned in '68. He came through Fairless Hills, PA, and we lived so close that we went to see him. I was all of 12. We got right to the edge of the sidewalk he walked up, and he grabbed my outstretched hand as he went by.

He may have turned into a creep after he took office, but I got to shake his hand.

Dole never let the electorate see what a full-of-humor guy he was until after he lost. What a waste. Yes, he was/is a better man than the Obamessiah will ever be.

You've got to find the chair Obama sat at and burn it to restore the sanctity of that Irish eatery, Benning! ;)

Brooke: If McCain's little action of yesterday backfires we may have to consider that eatery a shrine to The One!

I sure hope McCain knows what he's doing here... If this package doesn't work out McCain will take the fall, but if it does Obama's lack of cooperation will screw him.

As far as lost campaign time, it's not such a loss. Doesn't Congress adjourn on the 29th?

I find it interesting that Obama's folks are still saying the debate is on. Is he going to show up to an empty stage?

I shook Reagan's hand in 1978 or 79, but it didn't compare to Shephard's Pie. Fenian's, the pub in my area, fries the mashed potatoes after they are mashed. Try to figure that out. But, it is awesome.

Reagan was pretty cool, too.

W. Bush made me two hours late for a meeting in July of this year. Al Gore shut Jackson, Mississippi down for four hours, and Bill Clinton shut Jacktown down for two and the airport for three.

Dang, I hate politicians. Why can't they just do video conferencing?

This post makes me so insanely happy that I live in the country, Benning! Traffic jams are a thing of my past. I've lived in Los Angeles (yuck), Washington DC, El Paso, Orlando, Portland (another "yuck"), Seattle (more "yucks") Salt Lake City, just to name a few, and I will happily give up seeing famous people, especially Obama, for the privilege of not having to suffer traffic jams.

They should not burn that chair! They should put a picture of Obambi's face on it, shoot it full of holes and mount it on the wall. (I'm not overly fond of him.)

Wow, your traffic jam is probably my every day. *sigh*

Obama in an Irish pub, there is just something so wrong about that situation! LOL

Thanks for stopping by my blog, I really enjoyed yours and will definitely be back! :-)