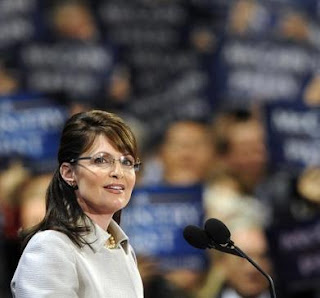 I am honored to be considered for the nomination for vice president of the United States ...

I accept the call to help our nominee for president to serve and defend America.

I accept the challenge of a tough fight in this election ... against confident opponents ... at a crucial hour for our country.

And I accept the privilege of serving with a man who has come through much harder missions ... and met far graver challenges ... and knows how tough fights are won -- the next president of the United States, John S. McCain.

You can also read the speech here.

She gave a good speech, energetic, funny, tough, exciting. For those who have heard her speak publicly, this was the Sarah Palin they know. She's not a stranger to public speaking. For those who thought she'd betray some nervousness, or even fall on her face, this had to be a bit of a shock. She showed no nervousness at all. She's not afraid. And she's come to fight for the principles she believes in, the principles John McCain believes in, the very principles that made this nation the greatest nation on Earth.

And children with special needs inspire a special love.

To the families of special-needs children all across this country, I have a message: For years, you sought to make America a more welcoming place for your sons and daughters.

I pledge to you that if we are elected, you will have a friend and advocate in the White House.

Palin acknowledged the hits she's taken from the Left regarding her 'lack of experience':

Before I became governor of the great state of Alaska, I was mayor of my hometown.

And since our opponents in this presidential election seem to look down on that experience, let me explain to them what the job involves.

I guess a small-town mayor is sort of like a "community organizer," except that you have actual responsibilities. I might add that in small towns, we don't quite know what to make of a candidate who lavishes praise on working people when they are listening, and then talks about how bitterly they cling to their religion and guns when those people aren't listening.

We tend to prefer candidates who don't talk about us one way in Scranton and another way in San Francisco.

John Hawkins, at Right Wing News, has this "Best Of" video from Sarah Palin's speech:

Mike Huckabee gave a very good speech, too. One of the things that really sparked was this:

"I'm not a Republican because I grew up rich, but because I didn't want to spend the rest of my life poor, waiting for the government to rescue me."

Rudy Giuliani was great! His was a hard-hitting, funny, to-the-point crowd-pleaser. One of the things he said took aim at the misogynists on the Left:

How dare they question whether Sarah Palin has enough time to spend with her children and be Vice-President. How dare they do that. When do they ever ask a man that question? When?

Again, John Hawkins shows us how good Sarah Palin was:

If the only thing you knew about Sarah Palin was what you heard from the Obama campaign's surrogates AKA the mainstream press, you'd think she was a poor little cupcake, in over her head, who'd probably stammer and cry at the podium and then run off stage to give up the vice-presidency.

Instead, after receiving a standing ovation from an adoring crowd, she walked out and delivered a A+ speech that was better than anything Barack Obama has done in the last two years, if not ever. Palin tried to do 3 things with the speech: build up her own resume, push John McCain, and hammer the hell out of Obama. To say she hit a home run at those three tasks is an understatement. Palin delivered a called shot, with the bases loaded, that went out of the park, across the street, crashed through the window of the Obama campaign headquarters, and rolled right up to the empty suit running the operation.

The blogosphere is full of goodies and analysis. All I can say is, "I'm glad I stayed up late to watch!"

Have a great day, Folks!

Update: C-Span has the speech videos here. I recommend, not only Sarah Palin's speech, but the Mike Huckabee speech, and the Rudy Giuliani speech as well.


And, just in case you missed it, here's video and text of Fred Thompson speaking at the Republican Convention Tueday night.

Brit writer from The Sun, Fergus Shanahan opines on the Palin Convention speech. Hey! There's sense in the U.K. still! (Thanks, Carol Mac!)

Another Update: Erick Erickson, at Red State, brings us this impressive bit:

Halfway through Sarah Palin's speech tonight at the RNC, people following the speech noticed she was deviating from the prepared text.

Unfazed, Governor Palin continued, from memory, to deliver her speech without the teleprompter cued to the appropriate point in her speech.

Contrast this to Barack Obama who, when last his teleprompter malfunctioned, was left stuttering before a crowd unable to advance his speech until the problem was resolved.

Victoria, at Sundries, has "Im-Palin", where she notes:

But it might surprise you to know, if you were one of the few in America last night not watching it, that it was she who came out to fight in the mean streets of American politics (Giuliani was merely content to warm up the gang, which he did magnificently).

She was wonderful last night, Benning, and all the other speeches were great too. I also stayed up late watching them. Fox News rather ticked me off because when Huckabee came on Hannity and Colmes were on and they were talking over him. We had to switch to CNN to listen to his speech. I couldn't believe they would do that, but they did. GRRRR!

Palin did a wonderful job and now Obama is out there trying to say she didn't have any specifics in her speech. That critcism coming from him is almost hysterical! LOL!

I was on vacation in The Berkshires while the Republican National Convention was happening, but I did take the time to read a transcript of Gov. Palin's speech when I got a chance...