I'm not much of a fan of "soft drinks" though I occasionally have one. Soda or Pop are not what I choose to drink unless I'm having a "mixed drink". Since I don't really care for hard liquor I cut it with something - no, water doesn't cut it sufficiently!

But I got to thinking about soft drinks as opposed to "adult beverages" and I remembered a few of the ones I didn't mind terribly. Now, when I was growing up, and spending my summers at the Langhorn Country Club - I was a competitive swimmer for a long time, and was a part of their summer swim team for over a decade - they used to have a soda machine out behind the locker rooms. You could sip your soda while looking over the eighteenth fairway. Always a nice breeze in the summer, under the porch that held the country club building.

The soda I always liked - remember, I was a kid! - was called Briardale Cola. Not Coke or Pepsi. It never seemed as sweet as the rival colas, was a redder color, and had a kind of nutty, or nutmeggy, flavor to it. The logo was a horse's head - some versions had the horse's head coming through a horseshoe. I liked Briardale. I've never seen it any other place and have not had a Briardale Cola since 1973.

Once I moved on to a kind of adulthood, and might want to drink something a bit sweet, I discovered "Squirt". Squirt is a citrus soft drink. Unlike 7-Up, or other citrus-flavored drinks, Squirt's main flavor seems to be grapefruit! Yuck! I loathe grapefruit! But I like Squirt. Wonder why. Fact is Squirt is not nearly as sweet as the other brands. So, I guess it's more of an adult soft drink. Anyway, I do like Squirt. It is available in the supermarket.

Squirt was developed just before World War II. The lower sugar content was a plus considering the rationing of sugar at the time. Herb Bishop created a new carbonated drink that required less fruit and less sugar. In Bishop's opinion, it was the freshest, most exciting taste in the marketplace. He named it Squirt. Understanding that marketing was required to compete with the bigger soft drinks, Bishop and his partner, Ed Mehren, came up with a little mascot called "Little Squirt"which was a success. 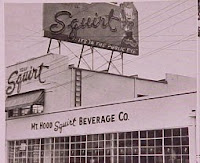 After the war Squirt was marketed as a mixer in the 1950s, and it's market share has grown, expanding into Central and South America over the years. The Squirt brand is now owned by Dr Pepper/Seven Up, Inc., a subsidiary of Cadbury Schweppes of London, England. Now, I don't remember ever seeing that mascot, Little Squirt. Probably because the company stopped using it long ago. But I do remember looking for Squirt at the store. It's one of my favorite non-adult beverages, I recommend it.

When we kids were young, and we'd get sick, Mom would dose us with Ginger Ale for nausea. As it was sweet it was easy to get us to drink it, even though it was served at room temperature. Ginger Ale does work for nausea, though peppermint is better, and tea works, too. But Ginger Ale seemed to be saved strictly for sick kids. We rarely saw it otherwise. My folks have never been tea-totalers, so I am well-acquainted with the mixers they used to use, way back when. Ginger Ale was always Schweppes or Canada Dry. In those days I don't think there was any such thing as a store brand. And that was the brand of Ginger Ale you got. Schweppes or Canada Dry. I didn't know there was any other brand out there.

When I moved myself to Florida in 1985, I discovered a soft drink called Vernors. It is billed as Ginger Soda rather than Ginger Ale. Is there a difference? A little, I guess. For one thing Vernors has a fuller body to it than your run-of-the-mill ginger ale. I think it has a touch of Cream Soda to it, which is how it was first recommended to me. Don't ask why, that was many years ago.

And the oddest fact is that Vernors is aged. How long do the bottlers age Ginger Ale? The very first batch of Vernors was, according to the Vernor family legend, aged for four years. Detroit-area pharmacist James Vernor put his drink concoction - made of 19 different ingredients, including ginger and vanilla - into a wood cask in 1862, then left for the Civil War. When he returned home, he opened the cask, and discovered something wonderful had happened in the meantime. The drink had acquired a zippy, gingery flavor. He had a hit on his hands. Vernors still takes four years of aging before it is bottled for the public. 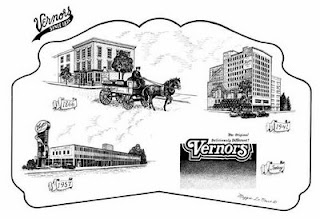 As you can read here:

A golden colored ginger ale was being imported from Belfast, Ireland and was becoming quite popular throughout the United States (ginger ale would be the nations most popular soft drink for about seventy years). A nineteen-year-old James Vernor began experimenting with his own ginger ale recipe. However, like many young men his age, during 1862 in Detroit, he put his plans on hold and enlisted as a Union soldier with the Fourth Michigan Cavalry. Before leaving for war though, James placed his experimental ginger ale extract into an old oak cask. At the end of the Civil War, James would return home and open a drug store of his own at 235 Woodward. Another thing that James opened was that old oak cask. To his surprise, the four years of aging blended a select group of secret ingredients to perfection.

Turns out James Vernor was a bit of a fanatic when it came to quality control, so the fame of Vernors spread a little slowly. But spread it did. From the Cadbury Schweppes page:

A soda fountain owner who wrote to Vernor in 1898 noted that the ginger soda had acquired an enthusiastic following in his city. "Its purity, delicacy of flavor and great refreshing powers have been testified to by thousands of our soda customers," the franchisee wrote. In time, The Vernors Company would open a landmark bottling operation in downtown Detroit to handle its expanding business. This riverfront business became a favorite stopping place for locals and tourists alike in the 1940s. It was here one could sip a fresh Vernors for only a nickel and watch as it was being produced.

The Vernor family owned Vernors until selling it in 1966. Cadbury Schweppes owns Vernors now, as they do Squirt.

My last recommendation to you, beverage-wise, is Kool-Aid. Not just any Kool-Aid, but Watermelon-Cherry Kool-Aid. I don't know why they needed to add cherry flavoring to this, but maybe the watermelon flavor is too delicate. Anyway, my ex told me about it, and, being madly in love, I tried it myself.

One packet of Watermelon-Cherry Kool-Aid to a quart of water - no sugar! - and pour it over a glass of ice. You're an adult, so don't whine about the lack of sugar. Just try it! I'm talking about a refreshing drink. A nice flavor that refreshes! Try it!

Kool-Aid was invented by Edwin Perkins and his wife Kitty in Hastings, Nebraska. Its predecessor was a liquid concentrate called Fruit Smack. To reduce shipping costs, in 1927, Perkins discovered a way to remove the liquid from Fruit Smack, leaving only a powder. This powder was named Kool-Ade. A few years later, it was renamed 'Kool-Aid' due to a change in U.S. government regulations regarding the need for fruit juice in products using the term "Ade. Perkins moved his production to Chicago in 1931 and Kool-Aid was sold to General Foods in 1953.

A little inventiveness, a little chemistry and you have a popular drink! See this for more Kool-Aid history, and more on Mr. Perkins.

So, ignoring politics for a bit, I present to you three drink recommendations. Got any favorites yourself?
Posted by benning at 9:52 AM

I'm your opposite; I love soda (but I drink diet now that my child's metabolism is gone) and I love a hard drink neat. I can't stand the two mixed together!

I remember Mom giving us tepid Sprite when we were sick kids.

I tried the ginger ale remedy each time I was pregnant, but to no avail. :) It is good on it's own, though.

Kool-Aid? Yech. Never have liked that one, even as a kid.

I needed that after all the pig lipstick politics today. I'm not familiar with the "cool drinks" (as they are known in S. Africa) that you mention except for Schweppes and Canada Dry Ginger Ale. In fact I never drink them (refer OJ) but that watermelon-cherry Kool-Aid sounds delicious and I'll try it.

My Mom learned early on that we three kids didn't like Kool-Aid and wouldn't drink it. But I was pleasantly surprised when I tried the watermelon - sans sugar - and enjoyed it! I guess we do learn as we get older! LOL