I Remember The Music Of My Youth ...

I used to have an LP by Chet Atkins. My father got it as part of one of those record club agreements. It was titled, "Chet Atkins Picks On The Beatles". I don't know if Dad liked it or not, though I expect he sort of did. Dad, though decrying Rock 'N Roll, seemed to find most music enjoyable. After all, he and Mom bought me my first Johnny Cash album, introduced me to my love of Classical music, and reared me on a steady diet of Big Band recordings, Frank Sinatra, and Dean Martin. 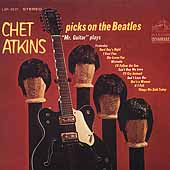 I think Dad tried to be the arch-conservative, and yet enjoyed so many things in the world of music. Anyway, when I discovered this album I was already a Beatles fan, though it was a kind of secret thing - we don't discuss Rock music around here! Shhh! - and I discovered that Chet Atkins intuitively felt the beauty of early Beatles songs and played better "cover" versions than so many other recording artists of the day. But I never followed Chet Atkins or his career, and the only lingering taste I had was that old, hissing album, now long lost.

Here's one of the world's finest guitar pickers, some years later, on his own television show, playing a medley of Beatles tunes, only one of which he'd played on that old album.

Can you figure out what the songs are?

PS: I now have the CD of that old album! It's still fantastic!

The Beatles songs Chet played were "If I Fell", "For No One", "Something", and "Lady Madonna".

The only cover version of a Beatles tune that I really enoyed was this version by the Mamas And Papas. It's the second cut in this medley.

I feel like such a nerd! I didn't get into the Beatles until after they had seperated. I didn't even appreciate Elvis until years after he was dead and I discovered his beautiful balads and hymns. What in the world was I doing? Oh yeah, I got married young and was busy raising my family, and at that time my favorite music was the Big Bands (before my time... honest)! Just call me square. :)

As long as you didn't fall for the Bay City Rollers, you're fine. Heheheee!

This stuff brings back a lot of memories
And you know what Bob Hope said:
Thanks for the memories