Geographically Speaking: The Land Of Israel 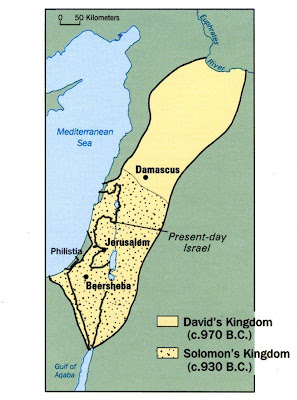 In Ancient times nations' borders were tenuous things, often following meandering rivers, coastlines, landmarks. Specifics are often lacking, forcing historians and geographers to guess where borders ran, using fragile documents of crumbling papyrus, chiseled monuments, baked cuneiform tablets. The Kingdom of Israel is one such nation whose ancient borders depend on guesses and scriptural readings that are not always easy to follow.

When modern Israelis talk about the traditional borders of Israel encompassing Judea and Samaria, they cannot be completely accurate regarding exactly where those borders ran. The boundaries of a famous city such as Jerusalem cannot, today, be defined perfectly as it has existed for millennia and has grown beyond its earliest size. But despite the rantings of some supposed scholars, there is no factual case against the existence of Israel in Ancient times. The Kingdom existed, founded by David in around 1,000 BC.

Despite David's prowess as a warrior, Israel came into existence in a time of relative peace. Israel's neighbors were fairly weak during this period. Thus Israel was able to defeat her enemies, expand her territory, defend herself against any threats. Solomon succeeded his father, David, on the throne in around 967 BC. Following his death the Kingdom disintegrated and split in two. The northern Kingdom of Israel fell to the Assyrians in 722 BC, the southern Kingdom of Judah would last until conquered by the Babylonians in 586 BC.

I won't bore you with a recitation of the history of the land of Israel. You should know most of it, including the Greek occupations, the Maccabean Kingdom, the Romans, the Ottomans. Suffice it to say that Jews remained in the land despite most of their brethren being dispersed throughout the world (The Diaspora). 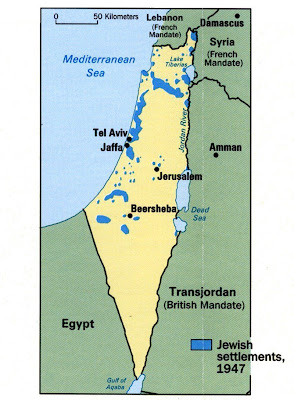 Following World War I, with the defeat of the Ottoman Turks, the entire Middle East fell to the powers of the West, including the French and the British. Britain took control of the lands of Israel and called them by the old Roman name: Palestine. This British Mandate was smaller than the Kingdom of Israel under David or Solomon. Established under the aegis of the League of Nations in 1922, the British would administer the land until 1948.

Across the Jordan River the British also controlled Transjordan. 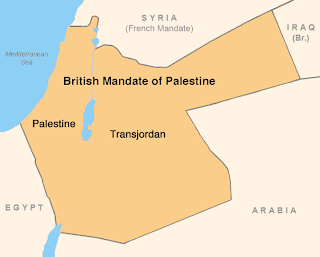 Initially, both the territory to the East and the West of the Jordan river were within the British Mandate for Palestine. "Transjordan" was a name coined as a reference to the part of Palestine "across the Jordan", i.e., on the far (eastern) side of the Jordan River. On the western side of the Jordan River was the remaining 21% of the Palestine Mandate, which contained many places of historical and religious significance to Judaism, Christianity, and Islam.

So, as you can see, all of modern Jordan and Israel were a part of the British Mandate of Palestine. All of it. With the War of Independence in 1948, the Jordanians (actually Palestinians, if that name has any real meaning) already controlled most of so-called Palestine. 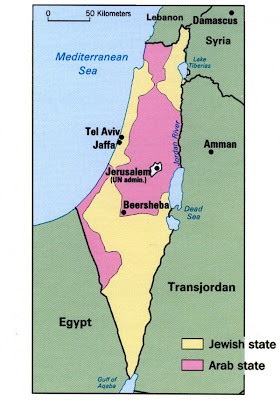 In 1947, the British government, weary after the long war, and economically crumbling, decided to withdraw from the Mandate of Palestine, stating it was unable to arrive at a solution acceptable to both Arabs and Jews. The newly-created United Nations approved Resolution 181 (the Partition Plan) on November 29, 1947, allocating just over half the land for a Jewish state and most of the rest for an Arab country. Jerusalem was to be designated an international city administered by the UN to avoid conflict over its status. The Jewish community accepted the UN Partition Plan, but the Arab League and Arab Higher Committee rejected it.

They wanted all the land, and they didn't want any pesky Jews on it. 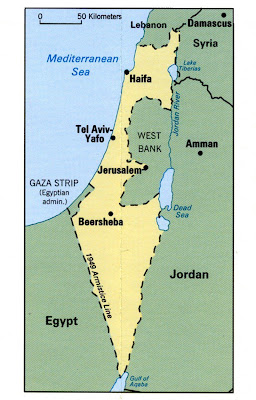 The British Mandate ended on May 13, 1948. The very next day, May 14, the Jewish state was proclaimed. And shortly after that the Arab world declared war and began the 1948 Arab-Israeli War. The Jordanians captured what is called the West Bank and would hold it until the 1967 Six Day War. They captured the eastern part of Jerusalem, called the Old City, and would rule it with an iron fist until the Israeli Army took it in the 1967 Six-Day War. During the Jordanian "occupation of the West Bank and East Jerusalem,of course, no one demanded it be turned over to the UN or anyone else. Jordan captured the areas in War and held them until forced out.

Contrary to the terms of the Armistice Agreement of 1949 between Jordan and Israel, Israelis were denied access to Jewish holy sites, many of which were desecrated, and only allowed extremely limited access to Christian holy sites.

In short they acted like an Occupying Army, and treated the inhabitants as any tyrannical government does.

Once freed of Arab control, the city of Jerusalem, indeed most of so-called "Palestine" prospered. Arab citizens are usually treated with kid gloves, granted rights that no Jew in an Arab country would ever have, and allowed economic and educational opportunities that do not exist in Arab nations. In short, Arabs in Israel are free. 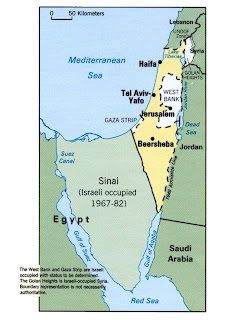 In the aftermath of the 1967 war, the Israelis occupied the West Bank, the Gaza Strip, the western portion of Syria's Al Qunaytirah Province (the Golan Heights), and Egypt's Sinai Peninsula. The Israelis reaffirmed their control of these territories during the 1973 war. In late June 1967, Israel unilaterally incorporated some 67 square kilometers of West Bank land within the city bounds of Jerusalem and in 1980 proclaimed a united Jerusalem as its capital - a move that amounted to de facto annexation. In 1981 Israel also unilaterally annexed the Golan Heights. The international community has not recognized these declarations. Israel returned the Sinai to Egypt as part of the Camp David accords; and in September 1993, Israel and the PLO - after formal mutual recognition - signed a Declaration of Principles eventually extending limited self-rule to Palestinians in the West Bank and Gaza Strip.

Would any Muslim nation voluntarily return land to a conquered enemy, much less to a Jewish enemy? Should Israel cede any more land in a bid for Peace? Has this worked for Israel before? Would the next time be different?

After reading a post regarding the "Occupied Territories" and whether the Israelis should give them back, since the people of Israel are quite divided on the issue of "Land for Peace", I commented:

The UN-mandated borders, of Israel and Jordan (Palestine), were violated by acts of war committed by Israel's neighbors, including the state of Jordan. Those states forfeited any right to the land they lost in that and following wars due to their aggression. Though "Land for Peace" may play well in the Leftist media, it has not worked in reality. Loss of land following a war may not always be just, but in the case of Israel I think it is just and justified.

Under Israeli control, the places and people of the so-called "Occupied Territories" have been treated with a certain measure of respect, despite the ceaseless provocations of the losers in the various Arab-Israeli conflicts. This is something the Arabs could learn, but refuse to do. Arabs (including the Jordanians) have made a habit of desecrating tombs and Holy places of the Jews when they fall into their hands. Jews forced out of their homes and off their lands by the Arabs were absorbed into Israel, with nary a word about "repatriation". Arabs promised their brethren that after they crushed the Jewish state they would be given back their lands in Israel, lands the Arabs told them to leave to avoid the coming war. Their demands for "repatriation" of dispossessed Arabs (Palestinians) are silly on their face.

A nation of the size and power of the USA can certainly hand back control of conquered territories following a war. Our borders are not threatened by a rising, recently defeated Germany or Japan. But for Israel to do so would be suicidal.

When the Arab states declared war on Israel, and lost, they could not logically, or justly, demand a "do-over" and pay no price for their murderous folly. They paid for their war-making with land and blood. That is as it should be. They lost. Had the Arabs won, would you now, years later, be asking them to hand that land back to whatever Jews survived? I doubt it.

Let the Israelis hold on to the lands they won from the aggressors. Despite what the Left-leaning government of Israel avers, the people of Israel will only be safe by holding onto the lands that now serve them as a buffer from their enemies.

That was quite an education. Thank you.

Israel will not be safe until the Arabs either respect them or are terrified of them. Then there will be peace.

well God gave Israel the land and hmmmmmmmm ..I dont think the Arabs could care less about that little exchange!...:)