Last week's Sunday Opus comic, by Berkely Breathed, took a swipe at the Late Jerry Falwell. Not a terribly laughable comic, it was humorous. A snipe at Christians in a small way, as Breathed has done from time to time. It elicited no howls of outrage, no threats of violence, no enraged Christian Right Lawyers threatening suits and demanding boycotts and apologies. In other words, a typical response to a comic strip that took a shot at Christians.

The Washington Post syndicates Breathed's strip, and obviously felt no compunctions against publishing an Opus comic taking a shot at the late Evangelist. Me, I kinda liked the strip, and as I said, it was humorous.

But that was last week.

This past Sunday's Opus strip was another ball of wax, entirely. The target? Muslim Radical Fundamentalism. The Washington Post's reaction? They decided to pass it around so that their Muslim employees could pass judgement on it. Finding their employees uncomfortable with the subject matter, the Washington Post refused to publish the comic strip.

The difference? Christian feelings are unimportant; Muslim feelings are important.
A popular comic strip that poked fun at the Rev. Jerry Falwell without incident one week ago was deemed too controversial to run over the weekend because this time it took a humorous swipe at Muslim fundamentalists.

The Washington Post and several other newspapers around the country did not run Sunday's installment of Berkeley Breathed's "Opus," in which the spiritual fad-seeking character Lola Granola appears in a headscarf and explains to her boyfriend, Steve, why she wants to become a radical Islamist.

The installment did not appear in the Post's print version, but it ran on WashingtonPost.com and Salon.com. The same will hold true for the upcoming Sept. 2 strip, which is a continuation of the plotline.

Seems Muslims have no sense of humor, unless an infidel is being beheaded on film, or an apostate is being publicly hanged. How offensive was that comic strip? See for yourself: 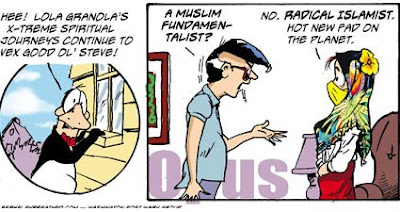 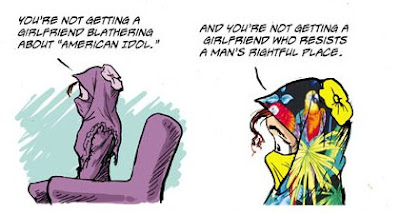 Knee-slapping funny? No, but humorous, just the same. Offensive? Well, I can't see it, but perhaps a Muslim would find it so. But who cares, aside from the Dhimmists of the American MSM? This was so bad that the mighty Washington Post could not publish it? But the Opus strip from the previous week was not?

Again, the difference is the target of the humor. Muslims are not to be offended in any way, lest they erupt in violence. Christians, on the other hand, are always proper targets of the MSM. Always.

The Washington Post Writers Group syndicates "Opus," and the Post is the cartoon's home newspaper. The syndicate sent out an alert about the two strips in question, according to Writers Group comics editor Amy Lago.

Again, from the FOXNews article:

Sources told FOXNews.com that the strips were shown to Muslim staffers at The Washington Post to gauge their reaction, and they responded "emotionally" to the depiction of a woman dressed in traditional Muslim garb and espousing conservative Islamic views.

There was also considerable alarm over the strip at the highest echelons of The Washington Post Co., according to the sources.

[Writers Group comics editor Amy] Lago said she flagged some of the syndicate's newspaper clients for two reasons: because of the possibility that the jokes about Islam would be misconstrued and because of the sexual innuendo in the punchline.

"The strip came in and I knew we would have to send out an alert to all the newspapers," Lago said. "I do that fairly regularly with materials that might pose issues for local areas. ... We knew that because it was a sex joke, it could raise issues. And there is another client that has issues with any Muslim depiction whatsoever."


Lago said she didn't flag newspapers about that strip because she didn't think readers would misunderstand the humor.

"They're not going to take it seriously," she said.

But she did alert newspapers about the Muslim-themed cartoon because there was a question about whether Muslim readers would be offended.

"I don't necessarily think it's poking fun [at Islam]," Lago said. "But the question with Muslims is, are they taking it seriously?"


Is the Washington Post biased? You betcha! Against Christians, against Jews, against traditional American values themselves. The Leftist media at its finest, Folks!

Sister Toldjah blogs on this, and Patrick did, too! Take a look. Neal Boortz noticed, too.
Posted by benning at 9:44 PM

Kinda makes me wanna...post something about it on my blog, too.

But I do hate to be unoriginal...

Heheheee! Go ahead and post! Your thoughts will be original!

Besides, you know you want to vent, Camo. ;)

excellent work Benning!..I tried to post on this but got sick to my stomach so I wrote bout tennis instead..LOL

This is bad enough, but it gets even worse, Benning. Shameless as it is to publicize my own post, I have a post up on the fact that there is going to be a Muslim public school opening next week in Brooklyn, NY! Our children aren't allowed to pray in public schools, but a Muslim school is going to be opening? We all know how many times a day Muslim's absolutely must pray! Something is really going wrong in this country.

not that im a racist or anything, but hahah really funny comic rendition of the situation..

Breathed is a good cartoonst. I used to love Bloom County. *sigh*