It's Been Two Years 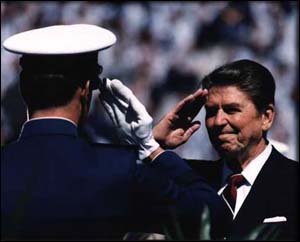 Two years ago, Ronald Wilson Reagan, suffering from Alzheimers disease, breathed his last, and passed into History. His final years were difficult ones for his wife, the long-suffering Nancy, who ministered to the stricken man throughout the fifteen years of his retirement from Public life, as he slipped deeper into his affliction. The Fortieth President of the United States was ninety-three years of age, having lived through the two World Wars, the Great Depression, the Cold War (which he was instrumental in bringing to a successful conclusion, something earlier Presidents had feared to do), and many other things we take for granted. Reagan, scorned as an actor - his main source of livelihood throughout his adult life - by the elitists of both main political parties, could communicate with the average American in ways that few other politicians ever have.

President Reagan showed a fine sense of humor, laughing at himself when the Left spun jokes at his expense. He could tell stories in a pleasant, folksy way that allowed the listener to 'get' the point, without the usual Politician's trick of beating the listener over the head. People 'got' Reagan, even when they were of the opposite political persuasion.

Democrats wanted to spin Reagan as stupid, and then the electorate as stupid, too, for electing him to the highest office in the Land twice. But Democrats always have, and still do, call Republican office-seekers, and office-holders stupid. It's just their way. Reagan was not stupid. He was a man who believed in calling a beast a beast, not a different-kind-of-person-who-might-be-just-like-us-if-we-just-give-him-money-and-talk-to-him-for-years-on-end. In other words, Ronald Reagan called a spade a spade. We, the people, loved him for it. His opponents hated him for it. So, they called him stupid, and he, in turn, ignored them. 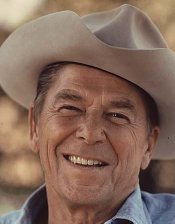 He also ignored the experts who told him that the USA could not defeat the Soviet Union, that we should not even try, that we should just get along with the most powerful, largest, Military Dictatorship on Earth. After all, Democrats and Republicans had done that for Seventy years.
But Ronald Reagan thought that was stupid. He said, "Here's my strategy on the Cold War: We win, they lose." And that made sense. Earlier he had asked an advisor, "Why can't we just win?" And there was no rational answer to that but 'we can'.

Ronald Reagan was not an original thinker - few of us are. He had an amazing memory, though, and so could quote at length. And his mind allowed him to find the right quote for the right occasion. Stupid? Hah!

He knew that it is better to deal from a position of strength, not weakness. You would think that was an easy truism, wouln't you? But we Americans have had a habit of disarming after every war. And, as Reagan said, "Of the four wars in my lifetime none came about because the U.S. was too strong." And, after winning the Cold War, becoming the only remaining Super Power on Earth, what did Reagan's successors do? Remember the 'Peace Dividend'? Wonder why we were not prepared for the 9/11 attacks? I don't wonder. Reagan would not have allowed us to sink so low. But President number 42 did! And the Congress, which consisted of so-much-more-smart men and women than old, bumbling Ronald Reagan went along with #42. Who was the stupid one, again?

Ronald Reagan was not perfect. Not even close. He was slow off the mark when AIDS became known, and should have been pushing research and common sense. He did not slash government anywhere near as much as he should have and could have. Welfare Reform should have been enacted during his administration, not in Clinton's. But withal, the man was solid, with a vision he shared with his fellow Americans. He had a simple Faith in this nation and its people. Something many politicians lack. 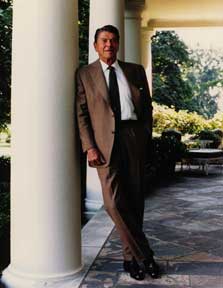 Reagan knew that the best one to decide what's best for you is you. Not some faceless, unelected, unanswerable bureaucrat in Washingtontion, D.C. So he spoke to us, and we listened. And we voted for him.

I never regretted it, and never will, and I won't forget President Reagan. I lived as an adult through his eight years in office. I know how much the MSM has lied about Ronald Reagan. And I won't forget that, either!

GOD Bless Ronald Wilson Reagan, Fortieth President of the United States of America. May GOD watch over his spirit.


Also: Angel has some information and her own opinion on Two Moms at Woman, Honor Thyself. Always On Watch celebrates Mohammed's Death Day in A Date To Remember. Anna tells us about yet another forgotten service-man. Did you know it wasn't only a reporter's crew who died in that IED blast? Alex brings you up-to-date at A Rose By Any Other Name! Read the linked stories!
Posted by benning at 8:49 PM

Benning, he was an amazing man and so sad that he didn't remember all the wonderful things that he did or was a part of throughout his life.

Anna: Did you ever read Tammy Bruce's memory of the moment she heard the Reagan had Alzheimer's?

RR was the last Presidential candidate for whom I enthusiastically voted. Was he perfect? No, but he loved America.

Oh and thanks for the links! ;)