A Tad Different: What To Make Of It?

This evening I received an email that sent me on a search. An image I have on my freeservers.com website was referenced in that email. I went looking for the image on Google so I could find the artist. Unfortunately all I could find, using every version of a word - Waxhaws - I could think of, was the image on my own site! The original is no longer up, or is no longer where Google can find it. I emailed back apologizing, saying I could find nothing, and that I didn't know who the artist or copyright holder was. It has, after all, been a few years since I found the image. Mea Culpa!

Then I got to thinking. First, let me put up the email for you to look at.

My name is D----- R---- and I work for the CBS Evening News in NY. I saw a copy of a painting of Battle of Waxhaws on your website and was wondering if you knew who owns the copyright to it. Do you know the name of the painter? Trying to locate info so we may use it for a piece on the CBS Evening News on Wednesday June 14th.
Thanks,
D----- R----

Now, if any of you have taken the time to buy my book - a fascinating and exciting novel that takes place during the American Revolution [hint! hint!] - you will know that the Battle of the Waxhaws involved the slaughter of unarmed men - Americans of the Third Virginia Regiment - by soldiers under the command of Lieutenant Colonel Banastre Tarleton. The veracity of the claim of a massacre has been argued since 1780. To this day no one knows for sure, save that the Battle itself was short, bloody, and frightening!

So, what would someone from CBS News want with an image, an old engraving, actually, of a massacre involving Americans and a hated invader? Any ideas? Why does the name 'Haditha' come to mind?

Look, I'm not saying that that is what Ms. R---- is going after, here. I have no knowledge at all, save what is in her email. In fact I have no way of knowing whether this person works for CBS, is Ms. R----, or is even a female at all. I have only what is in that email, and a certain amount of paranoid ideation. However, the return email addy is her intitials "@cbsnews.com". Me, I think this is a CBS employee. But what do I know?

I plan to watch the CBS Evening News on Wednesday night - a prospect I am not looking forward to - to see if the Waxhaws Massacre is referenced. Partly, this is simple curiosity. It would be nice to see the sad tale acknowledged, and the brave lives lost remembered. But something tells me that this is not what is in store, should the Waxhaws Massacre show up on the CBS News.

Again, this could be absolutely nothing. I could be way off base! Wouldn't be the first time, y'know. But it could be another 'Mary Mapes-ing' of a story. A way to convince Americans that even if the story - The Haditha Massacre - is false, why, we have been massacred in the past, so we must be sensitive to massacres and claims of massacres today.

The Haditha fairy tale is another phony tale that the media created, bought into, and will never relinquish. Just ask Dan Rather and Mary Mapes about letting go of a lie!

How paranoid am I?

Update - 6:30PM Wednesday 6/14: Yep! It was paranoia! Whew! Turns out that Sotheby's was selling a few flags captured during the American Revolution by the forces of Banastre Tarleton. Among them were three flags taken during the Waxhaws Massacre. The Great////Nephew of Tarleton was selling them, remarking that it was time they went home. 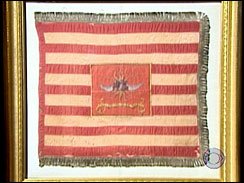 The buyer was anonymous, so I have no way to say where they are going. The flags are faded, wrinkled, and sad things to behold. One still bears the blood-stains, so the reporter said, of the flag-bearer. Interesting report. CBS did not mess it up. My fears were unfounded. Hey! I'm glad to be wrong! LOL

As CBS News says: "If flags could talk, these banners would have stories to tell — witnesses to the war that created America.

British warrior Banastre Tarleton captured them and sent them to his home in England, where his heirs passed them down.

"They're worth millions," Redden says.

Tarleton's descendants say they are selling the flags now because they can not afford to insure them.

One, which Redden describes as a 'sacred icon,' is estimated to be worth between $1.5 million to $3.5 million.

Tarleton, however, didn't think the flags were sacred. In his signature portrait, he's stepping on America's early flags.

Some historians believe these regimental standards are the beginnings of today's stars and stripes. The one from the Connecticut Dragoons, had 13 red and white stripes. The other, from a southern battle, was among the earliest to use five-pointed stars in a field of blue — a signature of Betsy Ross."
Posted by benning at 9:36 PM