John William Waterhouse: Something To Cleanse The Palate!

After recent ugly events, and sad remembrances, I thought it was time to get back to the reason for this blog. Besides getting you all to Buy My Novel! LOL

So, let's cleanse our palates, shall we?

From jwwaterhouse.com ⇒ ...of myth, romance, love, and elegiac beauty comes this snippet of information on John William Waterhouse:

"Although often classified as a Pre-raphaelite for his style and themes, Waterhouse is truly a Neo-Classic painter [I would argue that he was better than that. Perhaps a Romanticist or even a Victorian Classicist). Some of Waterhouse's earlier works were focused on Italian themes and scenery, reflecting his love for his birth place. Later on, his works picked up the styles and classical themes of Pre-raphaelites such as Alma-Tadema and Frederick Leighton. Waterhouse went on to paint well over 200 paintings depicting classical mythogolgy, historical and literary subjects, particularly those of Roman mythology and classic English poets such as Keats and Tennyson. Femme fatale is a common theme in his works, as most are of beautiful elegaic women and of many men are victims. 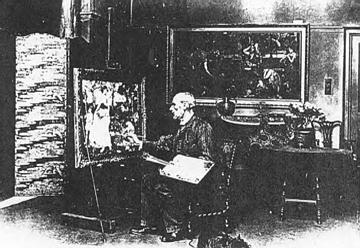 Waterhouse is one of the rare artists who became popular and relatively well-off financially when he was alive. He continued to paint until his death on the 10th of February, 1917 after a long illness. His style became a major influence on many of the later Pre-raphaelites including Frank Dicksee and Herbert James Draper." 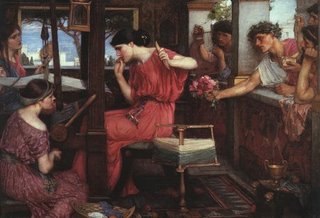 Okay, so what the heck does that all mean? Well, Anna at A Rose By Any Other Name could tell you, since she likes his works, too! So why not show you what the man could do? How about "The Lady Of Shallot"? 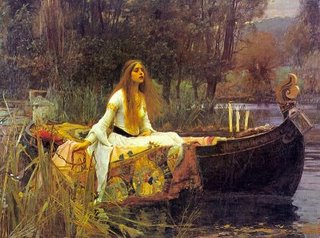 "The Lady Of Shallot"

This is the last painting that Waterhouse finished before his death. Depicts a violent storm, which makes it one of my favorites.

And here is another one of my favorites of his: Windflowers. Can you feel the heavy breeze? Is this simply the breeze of early spring, or does the wind portend a coming storm? Can you smell the flowers as the petals skitter and dance along the ground?

You can find images by John William Waterhause in many places online. May I recommend two of my favorite sites?

First, there's CGFA - A Virtual Art Museum, created and maintained by Carol Gerten-Jackson. Founded in 1996, this was the first online Art Museum I ever found.

And second, here's one I have recently found (HT/Dust My Broom) and have yet to explore sufficiently! It's a Gold Mine for Art Lovers: ARC International - The Art Renewal Center.

This does not mean I won't be posting on more artists. Quite the contrary! But why should I not spread the wealth of information? Go! Check them out! See all the beauty out there!

I think next time I will post about Women Painters of the Victorian Age. Interested? Such artists as Eleanor Fortescue-Brickdale, and Annie Louisa Swynnerton make you curious? Well, stay tuned.

Update: For barry, who mentioned that this is his favorite painting by Waterhouse, I give you:

The Lady Of Shallot is one of my favorites!

Now, I'm going go have to do a weekly (daily?) painting post! There are too many to show in one post! Thanks for the linkage, benning! Don't be surprised to see more at my place. Oh, and Illusions Gallery has all the paintings of the period that we like so much. You'll be seeing some Leighton and Dicksee and Hughes... ;)

Way too many, anna! I'll check out Illusions! Thanks!

There's a painting by Waterhouse called "Boreas" which is my personal favorite.

Thanks for the title!