Al Qaeda terrorist, and all-around cowardly, blood-sucker Abu Musab al-Zarqawi is now taking the Celestial Dirt Nap. He's assumed room temperature. May a thousand camels urinate on his remains. Or something like that! 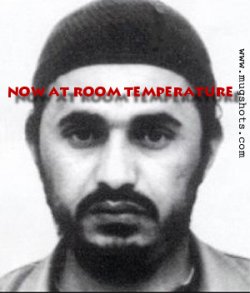 From the Guardian, comes this:

BAGHDAD, Iraq (AP) - Abu Musab al-Zarqawi, al-Qaida's leader in Iraq who led a bloody campaign of suicide bombings and kidnappings, has been killed in an air strike, U.S. and Iraqi officials said Thursday, adding that his identity was confirmed by fingerprints and a look at his face. It was a major victory in the U.S.-led war in Iraq and the broader war on terror.

Prime Minister Nouri al-Maliki said al-Zarqawi was killed along with seven aides Wednesday evening in a remote area 30 miles northeast of Baghdad in the volatile province of Diyala, just east of the provincial capital of Baqouba, al-Maliki said.

Loud applause broke out as al-Maliki, flanked by U.S. Ambassador Zalmay Khalilzad and U.S. Gen. George Casey, the top U.S. commander in Iraq, told reporters at a news conference that ``al-Zarqawi was eliminated.''

The announcement came six days after the Jordanian-born terror leader issued an audiotape on the Internet, railing against Shiites in Iraq and saying militias were raping women and killing Sunnis and the community must fight back.

Al-Maliki said the air strike was the result of intelligence reports provided to Iraqi security forces by residents in the area, and U.S. forces acted on the information.

A Jordanian official said that Jordan also provided the U.S. military with information that helped in tracking al-Zarqawi down. The official, who spoke on condition of anonymity because he was addressing intelligence issues, would not elaborate, but Jordan is known to have intelligence agents operating in Iraq to hunt down Islamic militants.

Some of the information came from Jordan's sources inside Iraq and led the U.S. military to the area of Baqouba, the official said.

Baqouba has in recent weeks seen a spike in sectarian violence, including the discovery of 17 severed heads in fruit boxes. It was also near the site of a sectarian atrocity last week in which masked gunmen killed 21 Shiites, including a dozen students, after separating out four Sunni Arabs.

``Those who disrupt the course of life, like al-Zarqawi, will have a tragic end,'' al-Maliki said. He also warned those who would follow the militant's lead that ``whenever there is a new al-Zarqawi, we will kill him.''

``This is a message for all those who embrace violence, killing and destruction to stop and to (retreat) before it's too late,'' he said. ``It is an open battle with all those who incite sectarianism.''

Khalilzad added that ``the death of Abu Musab al-Zarqawi is a huge success for Iraq and the international war on terror.'' He also gave a thumbs up and said it was a good day for America.

Casey said the hunt for al-Zarqawi began in the area two weeks ago, and al-Zarqawi's body was identified by fingerprints and facial recognition.

Al-Zarqawi, who is believed to have personally beheaded at least two American hostages, became Iraq's most wanted militant - as notorious as Osama bin Laden, to whom he swore allegiance in 2004. The United States put a $25 million bounty on al-Zarqawi, the same as bin Laden.

U.S. forces in Iraq said the killing was a major victory.

``We killed him, and it's always great when you can remove someone that has caused this much harm,'' said Maj. Frank Garcia, public affairs officer for the 2nd Brigade Combat Team, 101st Airborne Division. ``We're one step closer to providing stability to the region.''

Plan on the MSM discounting this. Zarqawi's death will be relegated to secondary importance by the MSM. This murdering, bloody, Evil creature is finally dead, and we thank GOD! Now, let's kill the rest of the Muslim invaders of Iraq and be done with it! (That's right! The so-called insurgents tend to be from other countries, Folks. They aren't Iraqis at all. Thus, no isurgency, no matter how much the Left and the MSM wants it to be so. These are Islamofascist invaders doing the murdering, not Iraqis. Let's kill them all, shall we?)

Here's a look at this from Laura at The Wide Awake Cafe. Go at once! Visit! Comment! And don't forget Gina Cobb's take on this. Jeanette at Oh, How I Love Jesus blogs, too!

Are we happy at the death of a man? Yes! But remember that this man was not human. This was a man who could saw off the head of a bound, living hostage, and gleefully hold the head up for the video camera.

Yeah! It's enough to make me want to run out and buy some cupcakes! LOL

Well, no, not cupcakes. Maybe a big bag of M&Ms? Wheee!

Good day to be alive!


If you're not Zarqawi! Hehehee!

And good morning to you!

What a great present for the MTP's Death Day!

Do you think he'd mind that it's a day late?

Can you believe the idiots complaining about Zarqawi's death? And these from American Media types? What is wrong with them?

Zarqawi's death is a long time coming, now on to bin Laden.....but the sad news is there are still so many more evil terrorists out there just willing to pick up the ball.....they all need to be exterminated.....zapped. These terrorists are pure EVIL.