Moses' Horns: No Longer An Excuse

When we read a passage, whether in the newspaper, a letter, or a book, we base our understanding of what we are reading on our knowledge of the language. Thus, presented with information we have never before encountered, we must interpret the writer's intention, and meaning, using a limited amount of facts. Over the past few years the limited amount of facts have become nearly unlimited. That being the case we are no longer unable to see behind the writer's words, but have the ability, if we choose to use that ability, to see that the writer may be biased, mistaken, in error, even exactly correct.


Today no newspaper can get away with publishing out-and-out propaganda, half-truths, and hatchet-jobs with impunity. Not if the readers use the resources available now, and take the time to ferret out the facts. A writer can, once confronted with the evidence of error, claim misinterpretation by the reader, mistranslation by the writer's own source material, even, in extreme cases, claim the writing has been taken out of context. But the writer is no longer writing in a knowledge vacuum; the reader is no longer in a vacuum, either. The reader has tools readers of past ages never had, and can easily discover when the writer is pulling the wool over the reader's eyes. Or when the writer has made a mistake so as to draw the writer's attention to it.


We used to depend on the knowledge and expertise of the writers, believing that, as educated, trained professionals, their product was reliable. Such a case resulted in the Vulgate Bible. Jerome, commissioned by Pope Damasius I in A.D. 382, to revise the four Gospels from the Old Latin texts, eventually went beyond his original commission. Jerome would abandon some of the Greek translations to finally delve into the Hebrew texts of the Septuagint to produce a version of the Bible that was drawn from a purer source than the muddled Greek and Aramaic versions of the time. Although Jerome was considered fluent in Greek, and thus well-qualified to translate the Greek Gospels into Latin, his Hebrew was not fluent, though he moved to Jerusalem to perfect his understanding of the language. He was not wholly successful. But the end-product of his endeavors was better than the Bible the world then knew. Still, Jerome made errors, and they resulted in some very odd understandings which we can see today. 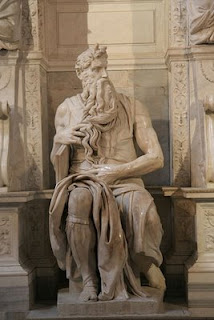 Photo of "Moses" by prasenberg

I expect most of you have seen Michelangelo's magnificent sculpture of Moses. Wiki says:

The Moses is a marble sculpture by Michelangelo Buonarroti 1513-1515 which depicts the Biblical figure Moses.

Originally intended for the tomb of Julius II in St. Peter's Basilica, "Moses" and the tomb were instead placed in the minor church of San Pietro in Vincoli on the Esquiline in Rome after the pope's death.

You notice, of course the horns growing from Moses' head. This is not a political or religious statement by Michelangelo. Rather it is probably the result of Jerome's faulty Vulgate translation of Hebrew in Exodus 34: 29-35. The text contains the word "Haran" (or Qaran) which, depending on the context, can mean 'radiated (light)' or 'grew horns'. Jerome's mistranslation then became a regular image of Moses created by many artists, of Moses with horns growing from his head.
From Moses Hand:

Jerome took the basic meaning of the word and neglected its derived meaning of "to emit rays." Many times in Hebrew one must assign the meaning of a word based on its context. In Psalm 69:31 qaran is used to describe an ox or young bull. There the translation as "horn" is appropriate. But in Exodus 34:29 qaran is used in conjunction with the phrase "skin of his face." From the context of following versus[sic - should be verses] the meaning as "horns" is not supported. The Apostle Paul understood this to mean "shone" and not "grew horns" as can be seen from 2 Corinthians 3:7-13. 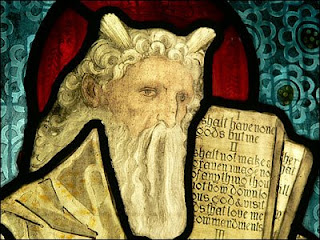 The Jews of Paul's time understood exactly what the passage meant. They knew and spoke Hebrew and understood it. But Christians of Jerome's time did not understand or speak Hebrew. Imagine all the beautiful art created by later Christians that are based on this simple mistranslation of a word - taken out of its proper context. Naturally, taken in context, the passage is powerful, but probably difficult to reproduce in marble:

Verse 29: And it came to pass, when Moses came down from mount Sinai with the two tables of testimony in Moses' hand, when he came down from the mount, that Moses wist not that the skin of his face shone while he talked with him.

Verse 30: And when Aaron and all the children of Israel saw Moses, behold, the skin of his face shone; and they were afraid to come nigh him.

As a result of this some Christian representations of Moses can be found with ram's horns. Further, some have taken this image and used it in their synthesis of Christianity with the Egyptian Amun and the Greek Aries to form mystic cults. 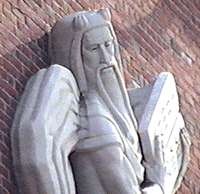 So much mischief from one little mistranslation, one tiny misinterpretation. Ages passed before that mistranslation was corrected. But in the interim, how many errors were compounded. So it is with the written word. What we read may be intended for good. But if it is in error we must challenge it. If only to correct what may be misunderstood by folks who will not look into the facts, or those who rely on misunderstandings to fuel their agendas. 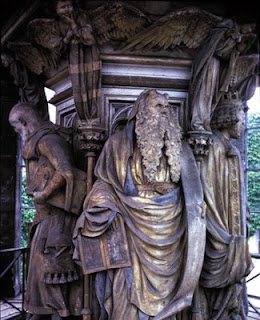 Note: To be fair, some believe that artists portraying Moses with horns were promulgating an ancient artistic, or religious, tradition. According to Ruth Mellinkoff in "The Horned Moses in Medieval Art and Thought", as reviewed in The Art Bulletin:

St. Jerome's translation must have made sense at the time. . . . The reader of the Vulgate would have understood this passage in the light of an age-old tradition: the horned head or the head wearing a horned headdress symbolized divinity, honor and power in ancient civilizations. Such horned accouterments rated as devices which made manifest both magical power and protection.

Of course, the problem is that times have changed, so have our traditions and traditional understandings. I think it's a mistranslation. Jewish understanding would not agree with portraying Moses in such a way. The rays of light radiating from his face, after meeting with G_D, were as expected. Horns were something pagan.

Check Google for more on this oddity.

Maria has thoughts on this, too. Her take has nothing to do with my theme, but is interesting.

That is why I consider myself fortunate to be somewhat literate in Koine Greek and have a working knowledge of Hebrew. You can go back to the original texts and read what was actually written.

I definitely prefer the translations in more contemporary English; I never liked the King James Version, 'cause nobody speaks that way anymore...

There is all sorts of stuff like that in the bible. The red sea is not the red sea, it should have been translated as The Reed Sea.