Recognize the character above? You probably do. You should! He's one of the stars of the comic strip, "Mutts". His name is Earl, and along with his owner, Ozzie, and his friend Mooch (a cat!), Mutts chronicles the adventures and day-to-day happenings in Earl's world. This comic strip is a kind of throwback to earlier times, gentler times, in America. The strip hearkens to a humor that did not depend on raunchy jokes or naughty images to gain and hold an audience.

There's a lot of love in this comic strip. The love of a pet for its owner, the love of an owner for his pet, the love of animals for each other (yeah, I know that's a silly thing to say, but it fits here).

Along with the daily humor of Mutts, the artist, Patrick McDonnell, also supports Pet Adoption, and other pet-friendly causes, frome time-to-time. Those strips still have the gentle humor, but they also make you look at cruelty to animals in a way that isn't PETA-style in-your-face.

For instance, on the 'splash page' of the Mutts site, you will find 'news' links scrolling on the upper right. One of them has this to say, once you click the link: 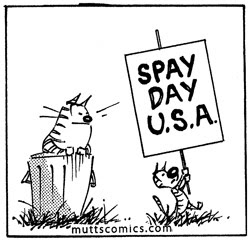 Help the Humane Society spread the word about Spay Day. Thousands of kittens and puppies are born every hour in the United States. While these baby animals are adorable, the fate of most of them is tragic. Spaying or neutering our pets and feral cats is the most effective way to reduce the vast numbers of animals who are born only to die prematurely and without a family who loves them.

Patrick has drawn two very special strips (see a sample of one on the left) that will run February 26 & 27 to promote awareness of Spay Day. This national campaign to promotes spaying/neutering as a simple, humane and effective way to end the tragedy of euthanizing homeless pets.

You can learn more about Spay Day by visiting the HSUS site.

I get a Mutts strip emailed to me each morning. And I save them! Yeah, it's silly, and I ought to grow up, but I still do it. And I love it!

The most enjoyable aspect of the strip, for me, is watching the give-and-take between Earl and Mooch. If you read the strip you'll know that Mooch has a bit of a lisp. Yesh! And all by himself, Mooch is special.

According to the Mutts site:

Patrick McDonnell was born on March 17, 1956. A native of New Jersey, he attended The School of Visual Arts in New York City on scholarship, and graduated with a BFA in 1978.

McDonnell then launched a successful career as a freelance illustrator, drawing the Russell Baker Observer column for the New York Times Sunday Magazine from 1978-1993, and Bad Baby, a monthly comic strip for Parents Magazine, which ran for 10 years. During that time he also was a regular contributor to Sports Illustrated, Reader’s Digest, Forbes, Time and many other national magazines. His work has been animated for television commercials, most notably a PSA for the NY Philharmonic. He is coauthor of Krazy Kat: The Comic Art of George Herriman, published in 1986 by Abrams.

In 1994 McDonnell created Mutts, a daily newspaper comic strip distributed by King Features Syndicate. He has since received numerous awards for his strip. These include:

An Abrams book of his life and work, Mutts: The Comic Art of Patrick McDonnell, was published in Autumn 2003. He has recently embarked on a children’s book career, and his The Gift of Nothing was on the New York Times bestseller list in January 2006. He has been on the board of directors of the Humane Society of the United States since 2000. The Mutts characters appear on a New Jersey Animal Friendly license plate. McDonnell tries to live a conscious, organic vegan lifestyle with his wife Karen O’Connell, dog Earl, and cat MeeMow.

McDonnell is a member of the following boards / advisory boards:

With the publication of the first Mutts book, in 1996, Charles Schultz, beloved creator of Peanuts, penned the introduction. I have a few of the earliest books. And, yes, I reread them now and then. They never get old for me. I used to own some of the earliest Peanuts books, too, back when they weren't called Peanuts. And Schultz's early strips didn't get old either!

Mutts, and Peanuts, are quite unique, not only for the gentleness I mentioned earlier, but for the artwork. In the case of Mutts, McDonnell seems to emulate the very early cartoonists from the beginning of the Twentieth Century. The look is very original.

Need a laugh? Don't want to "go there"? Just want to smile and feel good? Well, why not take a trip to Mutts and check out the archive of strips? Maybe order a book? Will you? Yesh!

A Hat Tip to Sister Toldjah for this: Protector of the free world deserves better

To keep up the good feelings, here's something from Sues Views: 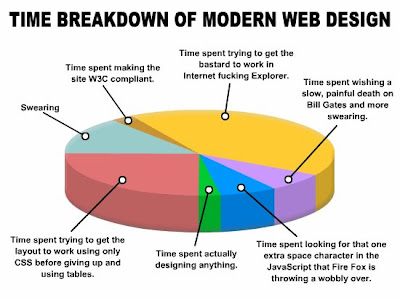 Love it! No, I've never seen it before. It's a wonderful strip and I thank you sincerely for the link, Benning.

I wear a red shirt on Friday every time I go anywhere. I don't bother with it if I'm not going into town though. No one sees me out here in the country and I don't like wearing red. Some people wear red well but I'm not one of them. Still, I do it anyway.

I don't look too good in red - sorta like a "Red Rubber Ball", I think - but wear red to work.

Mutts is such a nice comic strip, I just had to post! LOL

I have been a fan of Mutts ever since it was published in the Indianapolis Star. Gentle humor is always appreciated after a rough day.

It also helps to have pets (it helps one understand the thought process of the characters).

I've tried to wear a red shirt every Friday, but I've goofed a couple of times - early mornings are not helpful to determining the colors of one's clothes...

I loved Calvin and Hobbes before the artist retired, and currently enjoy Get Fuzzy, and Clear Blue Water.

I love the cartoon, but I didn't think the table called "Time Breakdown of Modern Webdesign