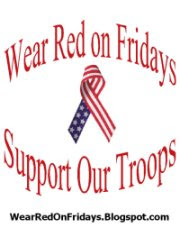 Friday is upon us, once again, and it's time to put on our red shirts, or blouses, and let everyone know that we support the men and women of our nation who have put themselves in Harm's Way for our sake. You can do this and make a political statement if you like. You can do this and make no political statement. Whether or not you support the nation's efforts to fight the forces of Evil, Terror, and Chaos in the world, this tiny effort is a simple way to say, "I support our troops!"

The effort - Red Shirt Friday - spans the continent from Atlantic to Pacific, and from the Rio Grande to the Arctic Circle. The people of the United States of America and Canada are joined in this display of support.

From Married To The Canadian Forces:

Red Fridays, a campaign encouraging Canadians to don red each Friday as a show of support for Canadian troops, was originally an American initiative. The idea was brought to our site back in March 2006 and from there it blossomed into a Canadian-wide effort.

And, as Snopes.com explained:

In the spring of 2006, a "wear red on Fridays to show support for the troops" crusade began developing in Canada after Lisa Miller and Karen Boire, the wives of two Canadian servicemen, thought to adapt the 2005 American exhortation quoted above to Canadians serving overseas and post the revamped suggestion to their web site, MarriedToTheCanadianForces.com. Their "Red Fridays" movement has been widely publicized and has proved to be very popular among military and families alike. On 2006, thousands clad in red attended such a rally led by Canadian Prime Minister Stephen Harper on Parliament Hill.

Red, by the way, is a color very strongly associated with all things Canadian, which possibly accounts for part of the reason for the program's being embraced so enthusiastically by the U.S.'s northern neighbor.

While some choose to interpret the solidarity display as being intended for Canada's military efforts in Afghanistan, others regard it as meant for Canadian soldiers abroad no matter how they got there and what they're doing and to offer them a visible "Thank you" for putting themselves on the line.

You don't need to put out a lot of money to be a part of this, Folks. A simple shirt or blouse is all you need. For my part, while a dress code is still in the works, I wear a red t-shirt every Friday. And have done since last June. You can do this, too.

You don't have to carry a sign and march along the streets, chanting slogans. You don't have to sign up to spend x-number of hours of your time. All you need do is wear a red shirt. And then gather up the gumption to explain why when asked.

Can you do that? I'll bet you can. It's small thing to ask you to do. And it could mean so much more than you imagine. For, at a time when the politicians are wavering, and offering solace to the agents of Death, by presenting resolutions that beg for withdrawal from conflict with those who would see us enslaved or dead, you will speak loud and clear in rebuttal. That red shirt says, "I support the troops! Don't abandon them! Don't endanger them with your spinelessness!" This is trans-national! Join the movement! 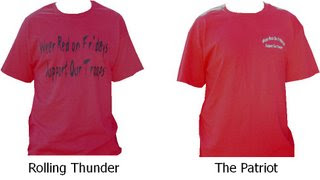 Note: If you'd like a shirt that says more, why not head over to Sues' place and take a look at the red shirts she's offering. The price is very reasonable. She has two styles of t-shirt, and has now added a polo-shirt, as well! So head on over and buy yourself a Red Shirt! Tell her benning sent you! Hehehee!

Gayle reveals where Rambo has gone. Yep, he's back in Afghanistan! And he's whuppin' ass! Funny how we only hear about this stuff from bloggers, isn't it? Where the hell is the media? Oh, that's right! Hard to see what's really going on when your collective head is jammed up your buttocks!

Border Patrol agents Compean and Ramos were charged, convicted, and sentenced for shooting a drug-smuggling illegal alien. Why? Well because DHS inspectors claimed, among other things: "They knew that he was unarmed. They knew that he was not a threat to them. That they had said that morning that they were going to “go out and shoot them some Mexicans.” Guess what? The DHS inspectors lied, the DHS lied to Congress, and innocent men have been imprisoned for no good reason. Kit and Heidi at Euphoric Reality have the news! Go, read it, and get good and mad! Then head over to Layla's Hill Chronicles to read up on what happened to one of those Border Agents while in prison. All this, I fear, in the name of Political Correctness? Where's Mr. Bush? Time for him to speak out!

And Sister Toldjah looks deeply into the John Edwards campaign bloggers to-do. Amazing what modern Liberals think they can get away with! I guess they think they still control all means of communication, huh? Sorry, Twits, but the Internet is still open to all!

Perhaps you've heard that there's a move afoot to ban PDAs, etc. when crossing the streets of certain towns in New York. Angel looks at this, and has some thoughts on the matter. And she looks at Gideon's being arrested for giving away Bibles on a public sidewalk. How dare they exercise peaceful fredom of speech, eh? As for me, I believe in "Survival of the Fittest". If you're too stupid to pay attention while crossing a road, why should we protect you? Let's thin the population of fools, shall we?
Posted by benning at 4:10 PM

I hope those Border agents appeal, and sue the CRAP out of DHS! There is NO WAY this injustice can stand.

It's become such a habit that I automatically choose red for Fridays!

Sorry I haven't been by for a while (been some rough times), but I LOVE your picture at the top!

Just saying "hey" and wearing red. I haven't been able to do much of anything these past days. Then good luck getting started again.

I religiously wear a red t-shirt every Friday. Have been for at least 6 months.