In the Roman Catholic Church, an oratory is a semi-public place of worship constructed for the benefit of a group of persons (Code of Canon law, can. 1223). Other faithful may attend the church under certain circumstances. An oratory is more private than a church, since in a church everyone has a right to attend. It is, however, more public than a chapel since only the owners of a chapel have the right of entrance.

The Gallarus Oratory is situated on the Dingle Peninsula near Ballyferriter in County Kerry, Ireland. (Bally [baile], meaning "town" in the Irish language ) Although I did a bit of a search for the name 'Gallarus', I found nothing, so I have no idea what that name means. Regardless, the Gallarus Oratory is a very interesting bit of ancient architecture. The boat-shaped building can sometimes be traced to early Viking times, the earliest of which was excavated at an 11th-Century site in southern Jutland. 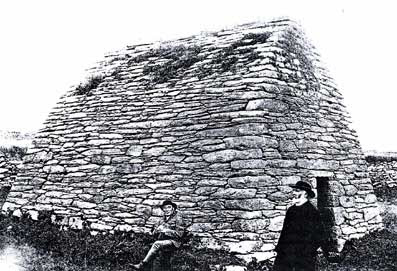 An 1899 photo of Rev.D. Murphy and Dr. George Stokes at the Gallarus Oratory, Dingle, Co. Kerry. This boat-shaped structure is highly similar to structures on the Balearic and other Mediterranean islands.
From The Golden Age Project 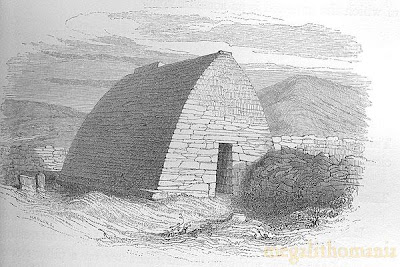 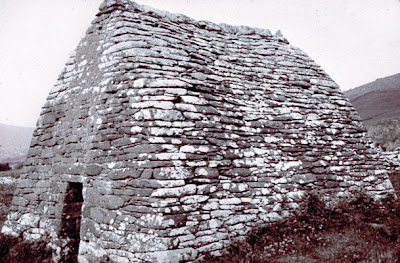 Gallarus Oratory before the Government cleaned it up for the public. From Professor F. C. McGrath, University of Southern Maine

The Gallarus Oratory is believed to be a product, perhaps, of the 6th to the 8th century. Nobody really knows for sure. Even it's designation as a place of Christian worship is uncertain. But it's placement, and the existence of a small stone, engraved with an Irish cross, nearby, make it probable. As early as the 6th century, monastic settlements were built in remote areas of Ireland. And this windwswept place is certainly remote, even today.

This photo, courtesy of Carsten Clasohm, is a nice view of the oratory showing the slight curves like a boat's keel and the gentle swayback of the roof.

This small oratory, built without mortar, uses corbel vaulting, a technique developed by Neolithic tomb-makers. It is dimly lit, with only a tiny window opposite the entrance door. Shaped like an upturned boat, this miniature church overlooks the harbour at Ard na Caithne (formerly also called Smerwick) on the Dingle Peninsula.

From Travels in Ireland. A nice wide shot. Notice that there is sunshine in this part of Ireland!

It is built with the stones being laid at a slight angle, lower on the outside than on the inside, allowing rainwater to run off. This design has kept the interior relatively dry, despite the lack of mortaring, allowing the building to stay in excellent condition. 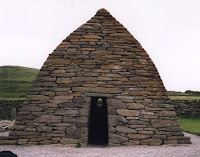 These images by Carol Bardon give you an idea of its size.

The following images are from Gallarus Oratory, a web page by Brian T. McElherron. 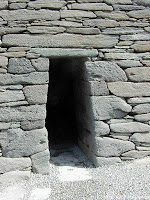 Gallarus Oratory is a fine boat-shaped structure with a narrow doorway with inclined jambs. 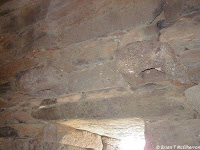 It is the only perfect example of its type to survive in Ireland. There is a small round-headed east window. Just above the doorway on the inside are two hinge-stones. 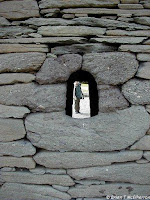 The walls are about 1m thick and internally the oratory measures about 5m by 3m by 5m high. 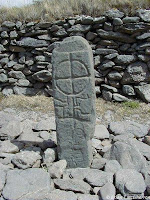 Close to the building is a stone about 1m high and inscribed with a cross within a ring, as well as some writing. the remains stand within an oval enclosure about 36m by 44m.

It has one doorway, and one window opposite. That east-facing window has a rounded top made of two carved stones (not a true arch). According to local legend, if a person climbs out of the oratory via the window, their soul will be cleansed. This is, however, physically impossible, because the window is approximately 18cm in length and 12cm in width. Some locals, however, claim that babies are passed out through the window, as they have been told it protects the child from ever drowning.

Seacoast scenery on the Dingle Peninsula 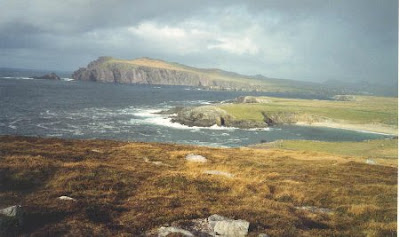 From The Dingle Peninsula. Remote and windswept, indeed!

What an odd and fascinating structure!

Not being Catholic, I had no idea what an oratory was; I knew only of chapels and churches... Very interesting!

This was an unexpected treat.

I saw a picture of the Oratory and I had to look deeper! Internet Fever strikes again! LOL

Fascinating and very interesting study. Continued your search for the gaelic meaning of 'Gallarus' and only found 'lodge for foreigners' at the site of the Irish music group Gallarus, here
http://users.pandora.be/gallarus/Gallarus_eng.htm

Benning,
Once again, thank you for teaching us about something unusual and wondrous.

Maybe my Celtic blood is what makes me partial to stone structures. My dream house is one made of fieldstone, but around here, builders are no longer constructing such homes.

Thank you... this was an excellent post. One question though.
"Notice that there is sunshine in this part of Ireland!"
Doesn't the sun ever shine on the rest of Ireland?.. pardon my ignorance, but I know nothing about the place....

I found this fascinating, Benning. I can't remember when I've spent this much time on one blog! The way those stones are laid is ingenious. People's roofs with shingles probably leak more often than that oratory does.

Thanks for something instructive and different!

AOW: I'd love to have a stone house, but then I grew up around Philadelphia. Lots of stonework in those Colonial-era homes.

ABF: Most of the images of the Oratory I found were taken during overcast days. Even the prints looked gloomy. I know Ireland has a lot of rain, thus the results lend credence to the title, "Emerald Isles".

Gayle: I think we forget just how clever so many of our ancestors really were. They were remarkably inventive, and that has continued to this day. Most so-called experts, for instance, cling to the belief that early mariners stayed within sight of land - the most dangerous place to be when at sea - for fear of the Unknown. Any seafarer knew that was silly, but the landlubbers didn't. And those "experts" were usually landlubbers!