Classic Beauty: Is It Ever Out Of Style?

The Anchoress dropped by today, and expressed admiration for the picture at the top of the page. No! She wasn't complimenting benning's manly mien, but the picture beside my wondrous mug. That is "Daydreaming" by Daniel Ridgway Knight.

Below is the painting in a slightly larger version. Just for The Anchoress! 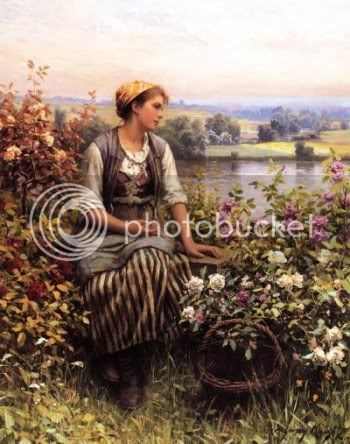 
Daniel Ridgway Knight, like so many of the finest of painters, lived the bulk of his life in the Nineteenth Century. He died in 1924. In every respect, this artist was a classical painter. Like others whose work I admire, Knight's art is lifelike without being pedestrian. I know, that sounds like I'm about to wax Academic. Don't worry: I haven't the training or the vocabulary to speak deeply on the subject.

Like so many folks, "I knows what I likes"! And I 'likes' Knight. I think what fascinates me so much is the way the truly classical remains powerful. The same is true of music, just as much as with painting.

What do I mean?

I enjoy Classical music. Really enjoy it! Yes, in the solitude of my apartment, with a favorite piece playing, I will do the 'Orchestra Conductor' bit. I wave my hands about, point to the violin section, and generally act like an odd-ball. I also play 'air guitar' while playing the Beatles, or Moody Blues. So it's not just for the old stuff that I get 'active'! LOL

That being said, I have favorites. Regardless of what the experts have to say on the subject, I like Pytor Ilyich Tchaikovsky. So do, and did, a whole lot of people. The experts, as is so often the case, are elitist boobs with all their taste in their tongues. Tchaikovsky wrote music that he enjoyed, and that we enjoy. And that's what makes a successful artist. It ain't what the experts say.

So for me, the Hungarian Rhapsodies of Franz Liszt are exciting to hear! Try them! You won't be sorry. Not a chance of that! They are not the sonorous funereal trudgings of Mahler and so many of the modern composers. Nope! This is music! Real, honest-to-GOD music!

Which brings me to Georges Enesco. Never heard of him? That's sad. I'd just about bet you've heard at least snippets of his Romanian Rhapsodies. And they are beautiful! This man was born in 1881, in the village of Liveni, Romania. Enesco (or George Enescu!) died in 1955, having spent most of his life in the Twentieth Century. Yet, when you listen to his Romanian Rhapsodies, you would swear you hearing the works of any great classical composer. For he is! A great classical composer. Play any of his "Romanian Rhapsodies", either No. 1 or No.2, and hear what I mean. I can't get enough of them! I can play them over and over again. And for me that's the ultimate compliment on any song's worth. And Enesco is beautiful: his was a classical style and beauty that may be 'out-of-style' for the self-proclaimed musical experts. But to anyone who hears his Rhapsodies, they aren't. No, they are beautiful. Always.

Below is another of Knight's paintings. Enjoy! It's classical and beautiful, and I don't care if it's out-of-style. I bet you don't either. 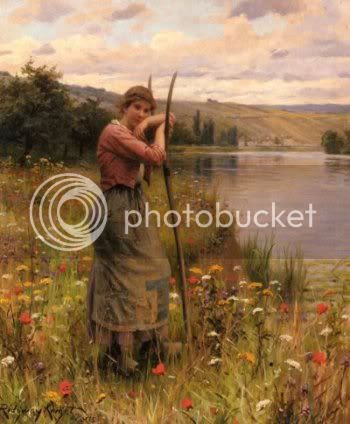 "A Moment Of Rest" by Daniel Ridgway Knight

I'll have to check out your music suggestions. I am the only one in this family that likes Classical music. The rest of the family is into eye rolling when I play it.

Boy that painting is lovely. Almost looks like a photo.

"The Lark Ascending" by Ralph Vaugh Williams.
That's all I'm going to say.
(You too, Hick.)

Thanks for visiting my odd little blog, and I'll be sure to check in with yours regularly, too! I enjoy the intellectual stimulation...

As you probably saw in my profile, I like all sorts of music, but Mozart's Requiem is still #1 on my list, especially "Dies Irae." I too enjoy Tchaikovsky, and am going to have to check out Enesco. I'm admittedly unfamiliar with him...

The paintings are super. I didn't know the artist and thought the one which you use on you blog was more from the romatic period. The way Knight handles color and light is remarkable. And anyone who has painted knows how difficult it is to deal with flowers.
As for the music, classical rocks. But then so does most any other type except the modern dissonant stuff. And Liszt was considered the rock star of his day. I think he married Wagners daughter. And Wagner was strange.
What has always intrested me is the transition of popular music to that of classical. Beethoven, Motzart, as well as Gershwin were considered "popular" in their day as well as many more composers. Are the Stones or The Doors tomorrows classics?

I too was curious about this picture, and so glad to find more details in the very first post here :)

Hi benning! Nice place you have here. I'm going to have to visit often!

We have similar taste. I work from home doing transcription work and I put the XM radio Popular Classical on while I work (it's motivating). Hungarian Rhapsody and Flight of the Bumble Bee were two I remember. Mozart is my favorite. He was so passionate!

As for the pictures...gorgeous! Here's a link to one of my favorite artists' work.
Ecstasy

anna! That's my Favorite painter! Maxfield Parrish! :D
I posted about him earlier. Heheheee! 'Flight' is such a neat piece of music! But it's over so fast. LOL

prithi: Glad you stopped by. I enjoyed your page. :)

gene: I'd bet in some way, yes, the Stones and Doors will be considered a kind of 'Classic' music in future (I'm more a Beatles/Moody Blues man, myself). But I think we've reserved the 'Classical' for symphonic/orchestral music. I don't see that changing. But, what the heck do I know? I didn't imagine 'Rap' would last this long!

As for the musical discussion, I agree that the classics that the critics poo-poo are usually the pieces that have melody and structure that people can actual hum along with and enjoy (with Tchikovsky, it's more like punch and punctuate-powerful and emotional music!).
You mentioned Gershwin. I'll put my vote in for Rhapsody in Blue as a long-time favorite of mine. I enjoy all kinds of music, even some that fall into the dissonant category (Zappa,King Crimson, Brian Eno, Beefheart, some of the modern classical composers, etc.)but mostly, I enjoy the kind of music that moves me. This would include especially, Blues, Classical, Bluegrass and some Rock.

beerme: I don't think I mentioned Gershwin, but I certainly could have. "Rhapsody In Blue" is as classical as anything composed in this century, yet with a new and different flavor added. The flavor of Jazz. To hear that piece used for an Airline commercial so many decades later ... it's still immediate in its impact! Great music!

Y'know, I can't really name a single Bluegrass artist (Bill Monroe???), but I love when I hear it. It's old, but peppy, evocative of the 'Hills', but it's part of the town, too. Mournful, yet there's hope, too. Saw a young family playing Bluegrass on the tube recently. Wasn't that interested in the show, but I kept watching while the family played. LOL And me a Rock 'N Roll Man! Heheheee!

Guess I'll jump back in. There was no artist able to play the clarinet glissando at the beginning of "Rhapsody in Blue" for several years after Gershwin composed it. Just thought I'd throw out there.
I think at this point many of "Duke" Elingtons compositions would be considered classics although they are not orchestral works. A while back a Japanese fellow, I think his name was Tomeko but I'm not sure, manipulated through a computer the wavelenghts from stars and planets to orchestrate Tchikovsky, Rachmaninoff and the like. To me the criteria for "classic" in this context are those forms which most accuratly represent a socialogical period in an artistic manner (don't ask me to define "artistic"). Those forms were traditionally delivered via an orchestra because thats what was available to the limited (by numbers but not by influence) aristocratic audience.
As far as bluegrass goes, where we live in SW Virginia is literally the bluegrass capitol of the world. Around here to say it's not a classic might be fightin' words. :)
As usual, Benning, your post got my verbose mode in gear.

My older daughter is 1st chair clarinet and is very talented. (Yes, I am proud, but she takes after my grandfather who played clarinet and trombone and taught both, as well as directed a Big Band in the 40s) Anyway, we have been trying to find the clarinet music for Rhapsody in Blue, but so far, it is only available in the full orchestra form.

anna: How has your Internet search fared? Somebody out there must have the clarinet sheet music. Who holds the publishing rights?

mac: Opine anytime you like! I never knew that about the opening to "Rhapsodie in Blue". I suppose in the greater scheme/understanding of things, folk music is classical as well, and I do understand the idea. But for my own feeble vocabulary, I'm still gonna apply Classical, not to the Beatles or Gordon Jenkins, but to Mozart, Bach, and the rest. LOL

Anna - I have ordered the clarinet solo from sheetmusic.com, but have not received it yet - a tad expensive, around $34, but will be worth it to me.