Well, it seems this isn't terribly difficult to do, supposing one has a lot of opinions and plenty of time to express them. I have the opinions, but not so much the time. Free time I use reading blogs, writing - or attempting to - my novel, and just generally goofing off. That's me - a goof off.

Now, I do have a completed novel, "Benning's War - A Novel Of The American Revolution", at a publisher, waiting to be readied for the buying public. As I understand it, my book is behind another that is having some production problems. Were this a large publisher I doubt my book would be held up. However this is a very small publisher, with limited resources. So what was supposed to be a December publishing date is now, tentatively, a January publishing date. Make sense? LOL

Now, that deadline of mine has passed, a galley proof was mailed to me, and has been gone-over with a fine-toothed comb, fixed, and the corrections emailed back. The new deadline? I don't have a clue. But I don't think there's anything else I need to do with the actual book. My writing, editing, and so on should be through. We'll see, huh?

Fact is, the manuscript was accepted in Late May 2005. By all rights I would not have expected it to hit the shelves for nearly eighteen months, anyway. Seems they liked it enough to put an editor on it right away. And then we struggled with revision and corrections for a few months. Sometimes it was fun. Sometimes it was hell.

Trust me, after you've written a novel, gone through it for errors, had it read by people whose judgement you trust, revised the daylights out of it, and sent it to a publisher ... well ... you are damned well tired of it. The last thing you want to do is look at it again. And again, and again, and ... Get the idea?

From my main editor, the manuscript went to two others. Same things from them. My choice was always make the changes or don't. "It's your book, benning. You decide."

After the three of them were finished, guess what? HAH! One more editor. AND I was asked what sort of cover I wanted.

"Well, we do have someone who's done a few covers for our authors." And I just know they're thinking, "Oh, Lord, he's gonna do a cover in Sharpie and crayons!"

"Well, lemme give it a shot, and you decide if it sucks or not, okay?" Yes, I did say that. Hey! I used to be a fair hand with a pencil, and painted some nice pictures in my youth. Well, I did! Hmmmph!

Here's the main picture I worked up. Not too bad, is it? Be brutal! 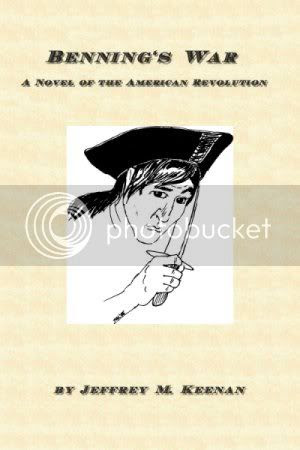 This is my work, folks. My sketch, my arrangement, my cover. Any good? well, I hope so. Besides, it's the inside that counts, right?

My novel is "Benning's War". It's a novel about the American Revolution. It covers a small period in 1780, from the Waxhaws Massacre to the Battle of Kings Mountain, and a little bit beyond. I think it's quite good. I hope once it's published that you buy a copy. AND that you agree that it's good.

. ePress Online is a small publisher, but they're growing. Why not visit them? See if the books now available aren't interesting enough to buy? I know most of the authors there, and they write some entertaining things. The non-fiction books are well worth the small price, too!

I am a composition teacher, and sometimes my students take a break from writing essays to indulge in a bit of creative writing.

So...I'm impressed with what you've accomplished. I myself am not great at writing fiction, but I know good fiction when I read it. Also, my best friend does a bit of movie-script writing. She hopes to sell one of her scripts soon.

Best of luck with your writing. Those who don't write have no idea of the Herculean labors required to get a major work finished.

Thanks for the kind comments, AOW! I think I like fiction more than non-fiction because of the research requirements for non-fiction. My inherent laziness demands I take shortcuts. So it's Fiction for me!

Although I have written two short plays, there's not enough visualization in that kind of writing for my taste. I wish your friend a lot of luck! That's a tough market to crack!

Thanks for the visit!

Nice to see you posting again!

For a multitude of reasons, and with carful consideration, "When ButterFlys Scream" and "Sewing Love" with not be avalible for public access after tonight. I do have a new blog " Screams From A Butterfly" All photos and writtings posted are origanal AB works. I do hope you will visit soon !
http://screamsfromabutterfly.blogspot.com/

What wonderful insights (and your funny as well -- great writing).

I liked this -- it links in with one of my goals for this year getting published. Best of luck.

Being publised is truly an honor :)