It Didn't End With Piglet 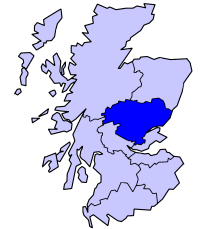 In Tayside, Scotland, it seems the Police have mightily offended the local Muslim population. How did they manage to offend the Muslims of Tayside, you ask? I bet some of you already know, but allow me to elucidate. The Tayside police produced what the Brits call a Postcard, which is a kind of advertisement. In this case an advertisement to let the locals know what the new non-emergency telephone number is and to remind them that "999" is the emergency number to call.

How did that offend the Muslims of Tayside - or at least the usual vocal idiots? The image the police chose for the card consists of a puppy sitting in a constable's hat. Now isn't that enough to make you choke with rage and indignation? Puppies! Good Lord, how offensive! Right?

Well, it is to overly-sensitive Muslims, it appears, as they are unable to turn their heads and not look at the offensive image of an unclean - non-Haraam - animal. They just can't get it out of their heads, as Jeff Lynne might say. 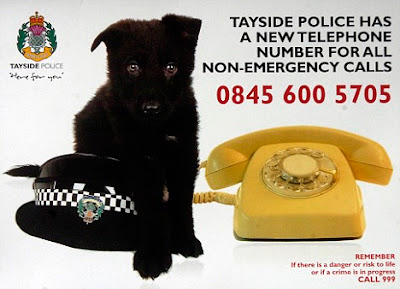 From The Daily Mail Online:

The advert has upset Muslims because dogs are considered ritually unclean and has sparked such anger that some shopkeepers in Dundee have refused to display the advert.
Dundee councillor Mohammed Asif said: 'My concern was that it's not welcomed by all communities, with the dog on the cards.
'It was probably a waste of resources going to these communities.
'They (the police) should have understood. Since then, the police have explained that it was an oversight on their part, and that if they'd seen it was going to cause upset they wouldn't have done it.'
Councillor Asif, who is a member of the Tayside Joint Police Board, said that the force had a diversity adviser and was generally very aware of such issues.

Ahh, yes, the politically correct 'Diversity Adviser." What a wonderful world the Scots now live in where images of puppies are deemed offensive. Yeesh!

Rebel, the offensive pup, has now been completely inoculated, though not against human stupidity, and will be taking to the streets. We can expect that local Muslims will now complain about police use of dogs in their work, which is already a hot-button issue everywhere in Britain. Again from the Daily Mail:

A spokesman for Tayside Police said: 'Trainee police dog Rebel has proved extremely popular with children and adults since being introduced to the public, aged six weeks old, as Tayside Police's newest canine recruit.
'His incredible world-wide popularity - he has attracted record visitor numbers to our website - led us to believe Rebel could play a starring role in the promotion of our non-emergency number.
'We did not seek advice from the force's diversity adviser prior to publishing and distributing the postcards. That was an oversight and we apologise for any offence caused.'

How sad is it that the police feel any need to apologize for displaying a cute puppy on an advertisement? From the Daily Telegraph article comments section, a moment of sanity and clarity:

8. Posted by Stevie The Scot on July 02, 2008 10:04 AM
If Muslims find dogs offensive or, indeed, any other part of British life not to their liking, why don't they bugger off.

They moved here, so they either adapt to our culture or they can get lost.

I find them quite offensive at times, so I wouldn't dream of moving to a Muslim country because of that.

I wish it really were that simple. I know you remember the hue and cry in Britain when Muslims - in 2005 - discovered Piglet. Mark Steyn wrote about it. So offensive was Piglet's image that local government's and employers sprang into action to erase the offending image. And that included ordering a homeowner to remove porcelain pig figurines from her windowsill. Can't be offending the Wogs on the street, now can we? 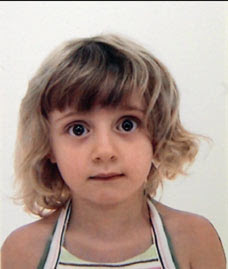 Even British Banks got into the act by banning ... wait for it ... Piggy Banks! The offense isn't to your regular British Muslim, but to the radical Islamists that have turned some areas in Britain into mini-nation-lettes under Muslim control. Even bare-shouldered images of little girls have been banned from Passport photos by overzealous bureaucrats. I would think that these are incredibly offensive actions to most British people.

Then again, perhaps not. They have yet to complain in sufficient numbers to put a stop to this stupidity. It continues. And it grows. Like the cancer that Islamism is.

So, hide your puppy pictures if you go to Scotland, cover your bare shoulders in Great Britain, and try not to be offensive. "Can't we all just get along?"

*Woof!*
Tip of the Hat to Callimachus!
Posted by benning at 7:34 AM

No, offensive would've been a picture of the puppy pissing on a copy of one of the MoToons.

The Scots should have told those whiners to go to you-know-where, rather than whip out the dhimmitude.

Too many of the Moslems in Western countries just don't "get it" about our way of life.

The appeasers and apologizers have served to embolden disgruntled Moslems.

The West needs to draw a line and say, "This far -- and no farther."

AOW: I imagine most prefer to say,"Okay, let me back up a bit."

Brooke: I wish the Police had done just that. But they are ruled, if you will, by the political animals that run the local Councils. Thus they have PC bosses to answer to.

AOW: I'm reminded of this scene.

Offend away. Just keep on offending them.

Heheheee! Well, we do try, Shoprat, we try.

The Banks in question haven't buckled to pressure and those "offending" piggy banks are still promted.

Then there's the Daily Mail and the accurate reporting of the facts? Hehehehe!! I laughed so hard I shook my fillings loose.