Today marks the 60th Anniversary of the Berlin Blockade, that illegal attempt by the Soviet Union to keep the Western Powers out of Berlin through intimidation. It didn’t work. The West knew it had every right to be in Berlin, by Treaty, and would not accede to this act of blatant force. Why Stalin tried this is something anyone who studied the Cuban Missile Crisis would understand.

In mid-July, 1945, with the Nazis defeated in May, the three Allied powers - the USA, Britain, and the Soviet Union - met to discuss the administration of a defeated Germany. The Americans were represented by President Harry Truman, the Britons by Prime Minister Winston Churchill, and the Soviets by Communist Party General Secretary Joseph Stalin.

It was here where Truman first mentioned to Stalin that the Americans had developed the atomic bomb and might use it against Japan ( which they did on August 6th and August 9th). Stalin already knew quite a bit about the Manhattan Project through his network of spies in the USA. Stalin suggested that Truman preside over the conference as the only head of state attending, a recommendation accepted by Churchill. Truman, being seen by Stalin as weak and amenable to flattery, was as mistaken as Nikita Khrushchev would be not too many years later. Truman, for his part, liked FDR’s “Uncle Joe” and thought less of Winston Churchill. He had misread Stalin as somebody who could be dealt with. 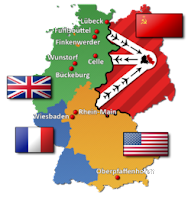 In an attempt to gain control of post-War Berlin, Stalin , then, on June 24, 1948, ordered the blockade of the three Western powers' railroad and street access to the western sectors of Berlin that they had been controlling. This had followed increasing Soviet interference in the movement of trains to Berlin. From Wikipedia:

On March 31 the Soviets increased the pressure on the West by demanding that every train entering Berlin from the western zones be examined. Several U.S. and British trains "forced the issue" with varied results, so General Lucius D. Clay, commander of the U.S. occupation zone in Germany, ordered all military trains to stop making the trip. Instead, he started an airlift, later to be known as the Little Lift, in order to supply the U.S. garrison with food and ammunition. The Little Lift lasted only about ten days, during which the United States Air Forces in Europe (USAFE) flew in about 300 tons of supplies. The Soviets eased their restrictions on Allied military trains on April 10, 1948, but continued to periodically interrupt rail and road traffic during the next 75 days.

Stalin knew that, other than the USA, the rest of the Allied powers were exhausted by the War and would be reluctant to resume hostilities now with the Soviet Union. However, what Stalin did not realize was that Truman, though naive at times, and certainly a bit of an innocent when it came to foreign affairs, was no weak pushover. Truman refused to acquiesce to the Soviet move. He would not go to War over Berlin, but he would not allow the Soviet Union to dictate to the US what it could do when it was in the right.

Though General Clay believed the Soviets, who had closed all roads and barge traffic into the city, were bluffing, and could be forced to reopen access, President Truman, following the consensus in Congress, stated "It is too risky to engage in this due to the consequence of war."

Although the ground routes had never been negotiated, the same was not true of the air. On November 30, 1945, it had been agreed, in writing, that there would be three twenty-mile wide air corridors providing free access to the city. Additionally, unlike a force of tanks, the Soviets could not claim that cargo aircraft were some sort of military threat. In the face of an unarmed aircraft refusing to turn around, the only way to enforce the blockade would be to shoot them down. An airlift would force the Soviet Union into the position of either taking military action in a morally reprehensible fashion that would break their own agreements, or back down.

Forcing this decision would require the airlift to actually work, however. If the supplies could not be flown in fast enough, Soviet help would eventually be needed in order to prevent starvation. Clay was told to take advice from General Curtis LeMay, commander of United States Air Forces in Europe, to see if an airlift was possible. LeMay replied "We can haul anything." 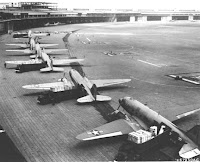 In response, the Western Allies formed the Berlin Airlift to supply the city over pre-arranged air corridors. The effort was initially viewed with skepticism even in the countries mounting the attempt, as this sort of logistical effort had never been mounted before. The airlift to supply the German 6th Army at Stalingrad required 300 tonnes per day and rarely came even close to delivering this; the Berlin effort would require at least 5,000 tonnes a day, well over ten times as much. In spite of this, by the spring of 1949 the effort was clearly succeeding, and by April the airlift was delivering more cargo than had previously flowed into the city via rail.

The success of the Airlift was humiliating to the Soviets, who had repeatedly claimed it could never possibly work. When it became clear that it was, the blockade was lifted in May. One lasting legacy of the Airlift are the three airports in the former western zones of the city, which served as the primary gateways to Berlin for another fifty years.

Britain, which had already begun airlifting supplies to its own troops in Berlin, was better prepared for the effort and led the way. You can read about it at Wikipedia or do a search. I’m sure you’re all familiar with the incredible story of the Berlin Airlift.

Yet another stupid move by the Communist Power, based on their own misreading of reality. Starving their own people to suppress them, nearly destroying their own military in the 30s for political reasons, believing they could deal with the Nazis until their military was repaired, utterly mis-reading the little man from Independence, Missouri, as weak.

Truman was certainly not perfect. His disgust with Dwight Eisenhower over Eisenhower’s criticism of George Marshall, and his denunciations of Eisenhower’s fecklessness was pointless and off-target. Marshall, architect of the famous Marshall Plan, had originally included nearly every nation on earth as recipients of American largesse. He also did not quite recognize the Soviet threat for what it was. Marshall had his own naïveté.

Truman took a long time to see just how undependable the Soviets were. Much like FDR, he didn’t see the reality behind the simple facade of Soviet Ambassadors and others. Unlike FDR, though, Truman would eventually figure it out.

The Blockade of Berlin began 60 years ago. Harry Truman stood up to the Soviets then, beat them, and embarrassed the, There would not be such an embarrassment for the Soviets until a Massachusetts Senator took office in 1961. John Kennedy would be misread by the Soviet Premier, Nikita Khrushchev, in the same way that Stalin misread Truman. And the Soviets would back down once more.

That is why Truman was what the Democratic Party is supposed to be. Modern Democrats would have handed the city over wrapped in a ribbon.

Another great bit of history, Benning; thanks!

Truman took a long time to see just how undependable the Soviets were. Much like FDR, he didn’t see the reality behind the simple facade....

The same could be said about the West's leaders today -- with regard to trusting Moslem leaders. Of course, one big difference is that so many Moslems live amongst us and are granted special consideration.

Well done benning! A thought - Ronald Reagan would have been proud to celebrate this day, with the Soviet Union in pieces.

But the Russian Federation is gathering strength (apart from new threats, perhaps more dangerous, from Fundamentalists). Are today's leaders up to it? These things can't be won by committees or computers.

Thanks, All, for taking the time.