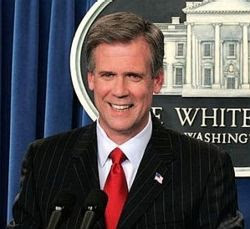 From Wizbang, I read the sad news. I googled to find more. From CNN.com:

WASHINGTON (CNN) -- Former White House press secretary Tony Snow -- who once told reporters "I'm a very lucky guy" -- has died at the age of 53 after a second battle with cancer.

Snow, who had been undergoing chemotherapy treatments for a recurrence of the disease, left his White House job September 14, 2007, and joined CNN in April as a conservative commentator.

In parting comments to reporters at his final White House news conference, he said, "I feel great."

He also called the job "the most fun I've ever had."

Snow said he was leaving the White House position to make more money. His White House salary was $168,000.

"The White House is so deeply saddened by this loss," said his replacement, White House press secretary Dana Perino. "He was a great friend and colleague and a fantastic press secretary. And his dear family is in our thoughts and prayers." 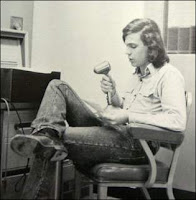 Snow also wrote a syndicated column for Creators Syndicate between 1993 and 2000. As a nationally syndicated columnist, his commentaries appeared in more than 200 newspapers nationwide. Snow won numerous awards during his print career, including citations from the Virginia Press Association, the Detroit Press Club, the Society of Professional Journalists, the American Society of Newspaper Editors, The Associated Press and Gannett.

He appeared on radio and television programs worldwide including The McLaughlin Group, The MacNeil-Lehrer NewsHour, Face the Nation, Crossfire, and Good Morning America. Until 1994, Snow was the writer, correspondent and host of a PBS news special, The New Militant Center.

From 1996 to 2003, he served as the first host of FOX News Sunday, a Sunday morning interview and roundtable program produced by Fox News, airing on affiliates of the Fox Broadcasting Company and later in the day on Fox News Channel.

Snow served as the primary guest host of Rush Limbaugh's program from the mid-1990s on. He was also a frequent commentator on National Public Radio. Snow's own Tony Snow Show on Fox News Radio premiered in late 2003. It ended when he became White House Press Secretary in April 2006.

Kim Priestap, whose Wizbang post got me looking, writes:

"I was on a couple of blogger conference calls with Mr. Snow when he was press secretary for President Bush, and he was so nice and kind. I was thrilled when, upon getting the chance to ask him a question, he remarked how much he liked my posts and that he wanted to email me to tell me so but didn't know how to contact me.

This is such a shame."

By the way: While looking for images of Snow I found this wonderful characature by John Cox of Cox & Forkum. The image accompanied a post from May of 2006. I also miss the Cox & Forkum duo.

I also miss the Cox and Forum duo, but I miss Tony Snow even more. He was a wonderful man who deserves this wonderful tribute, Benning.

His passing leaves a large hole. Who is going to fil it?

He passed at such a young age, too!

We just never know how many days we'll have; so, we should make the best of the ones that we do have.