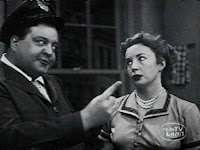 No, this isn't a post about Ralph Kramden, or Jackie Gleason, though that might be a fun topic. This is about Hominy. It's taken a while for me to ferret out the information. After all, aside from seeing cans of Hominy in the store, or seeing pictures of Hominy in menudo - a spicy tripe soup - my only up-close-and-personal knowledge of Hominy is in its dried, ground version we know as Grits.

I like Grits. On my days off I have two favorites for breakfast. Either egg/sausage/cheese burritos (which take maybe ten minutes to prepare) or grits. While the pot of coffee is brewing (dripping?) I want to make something fast, easy, and tasty. When I make grits I fry up some sausage, usually a single patty, and add some chopped green pepper. That's the hardest part.

I use Quick Grits - again, I want something fast and easy - and they are so easy it's laughable. 3 tablespoons of grits in a quart-bowl, one cup of water, a sprinkle of salt, then into the microwave. I run it on high for one minute, then stir, another minute and stir, another minute and stir, then 30 seconds. After that it sits quietly in the microwave for a few minutes.

I pull the bowl out, add a bit of butter (actually margarine, 'cause who can afford butter?) and stir in the fried sausage and green peppers. And, man, it's good eatin'!

I can just see some of you shaking your heads in disgust. "Ewww," you might be saying, "Grits?" 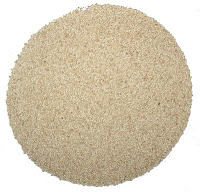 I used to make Cream of Wheat all the time. I liked it. I even tried Cream of Rice, too. But the rice is pretty bland. And I grew tired of Cream of Wheat. So I decided to give grits a try. My brother bought grits - well he begged my mom to buy him a canister of them - way back when we were still kids. I think he had them once, then never touched them again. My sister and I certainly never gave them a second thought. After all, with a name like Grits, who in their right mind is gonna eat them? Am I right?

Anyway, I had ordered them as a sidedish in an Egg Platter restaurant one time a few years ago (how many times can you get Home Fries or Hash Browns, huh?), just to see what they tasted like. And I liked them!

A little butter, a dash of salt. Not bad! 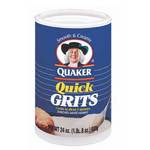 Wal-Mart has its own "Great Value" brand of Quick Grits, so I bought a canister. Just like an oatmeal canister from Quaker Oats, minus the smiling Quaker. Quick Grits are inexpensive, and they are pretty filling. So adding a few tid-bits to them merely adds to the flavor. And I've been eating grits for nearly a year now.

But I got to wondering about them. What is Hominy? I mean it looks like big, fat corn, right? But just what the heck is it? So I went googling. Of course.

And got lost. I mean how hard is it to just say what hominy is? Where did it come from? And so on? But, dang! The sites I hit went all around the subject leaving me scratching my head and frustrated. But this morning I tried again and finally found the basic information I was seeking.

Hominy is just dried corn. Dried corn that's been treated. Okay? Nothing exotic at all. It doesn't come from some secret 'Hominy' plant in the hinterlands of America. Ahh, but it's what is done to the corn that creates Hominy.

And basically here's what they do to make Hominy from corn.

Hominy was traditionally prepared by boiling the cleaned (got to get the dried silk and debris off, right?), dried corn kernels in a dilute lye solution made from wood-ash leachings until the hulls could be easily removed by hand and flushed away with running water. The lye in the wood ash causes the corn kernels to expand and thereby lose their outer skin. The resulting hominy would be washed at least seven times to remove the lye before being ground to a paste which was be made into tamales or tortillas. In the modern commercial technique, the corn is boiled in dilute sodium hydroxide, and the hulls are removed by the combined action of rotating cylinders and running water. 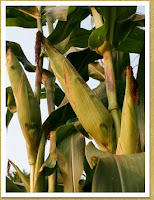 Hominy or nixtamal is dried maize (corn) kernels which have been treated with an alkali of some kind.

The traditional U.S. version involves soaking dried corn in lye-water (sodium hydroxide or potassium hydroxide solution), traditionally derived from wood ash, until the hulls are removed. Mexican recipes describe a preparation process consisting primarily of cooking in lime-water (calcium hydroxide). In either case, the process is called nixtamalization, and removes the germ and the hard outer hull from the kernels, making them more palatable, easier to digest, and easier to process.

The earliest known usage of nixtamalization was in what is present-day Guatemala around 1500–1200 BC. It affords several significant nutritional advantages over untreated maize products. It converts some of the niacin (and possibly other B vitamins) into a form more absorbable by the body, improves the availability of the amino acids, and (at least in the lime-treated variant) supplements the calcium content, balancing maize's comparative excess of phosphorus.

Many aboriginal American cultures made hominy and integrated it into their diet. Cherokees, for example, made hominy grits by soaking corn in lye and beating it with a kanona (corn beater). The grits were used to make a traditional hominy soup (called Gv-No-He-Nv A-Ma-Gi-i), a hominy soup that was allowed to ferment (Gv-Wi Si-Da A-Ma-Gi-i), cornbread, dumplings (Di-Gu-Nv-i) or fried with bacon and green onions.

No reason you can't put syrup on them at breakfast. Or add some berries to them. I recommend grits to you. If you like Cream of Wheat, give Grits a try. I think you'll prefer them.

Exploring the History of Grits

Grits are a common breakfast plate in the Southern US states where they are usually eaten with salt or cheese and never sugar unless you want a firm talking-to from the locals or an accusation that you don’t appreciate or understand the wonders of grits. Grits are also common, however, in East Africa where it is called Ugali and in southern Manchuria where it is called Gezi. The word ‘grits’ is a derivative of the Old English word ‘grytta’ which means a coarse meal of any kind. No matter the name, grits are a wonderful and delicious way to start or end the day.

Grits are basically coarsely ground corn that makes a sort of maize porridge. They are prepared simply by boiling the grits into a porridge or until enough water evaporates to leave them semi-solid, depending on your preference. They are traditionally served at breakfast, but I find that they are a perfect side for an evening steak.

I just may try that, next time I broil a steak. After all they're nothing more than corn. And did you know that corn is the only grain commonly eaten as a fresh vegetable? Think about it. It's true.

Mona Lea explains how she makes and cans her own Hominy. Interesting! She uses Baking Soda rather than a lye. 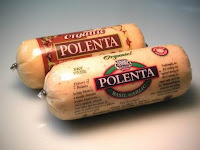 By the way ... if you think that maybe grits are kinda silly for supper, consider Polenta. It's corn, too. As Wikipedia notes:

Polenta is very similar to corn grits, a common dish in the cuisine of the Southern United States, with the difference that grits are usually made from coarsely ground kernels. When properly cooked, grits and polenta have similarly smooth textures, "grit" referring to the texture of the dried corn before cooking. Another variation uses ground hominy, lye-treated corn kernels.

Polenta is similar to boiled maize dishes of Mexico, where both maize and hominy originate.

The Brazilian variety is also known as angu. Originally made by native Indians, it is a kind of polenta without salt nor any kind of oil. However, nowadays "Italian" polenta is much more common at Brazilian tables, especially in the southern and southeastern regions (which have high numbers of Italian immigrants), although some people still call it "angu". The city of São Bernardo do Campo is famous for its restaurants specialized in frango com polenta (fried chicken with fried polenta).

I'd bet Patrick is familiar with the South African version, too. Mealie pap which is made from cornmeal mush. 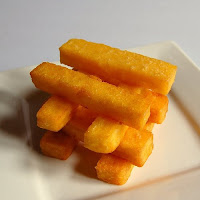 I watched a cooking show where the lady sliced open a tube of polenta from the grocery store (very wet!), sliced it, mixed the sticks of polenta with oil and spices, and baked them to create polenta fries - a kind of corn-meal fries. They looked awfully tasty!

Corn! It's good for you!

If a person doesn't like grits they really should not live in the south. I get natural stone ground grits from Mabry Mill, the most photographed feature in all our national parks and a working mill. They're not quick but are they good.

How much more difficult is it to make 'em than quick grits?

Benning: I grew up eating hominy (and grits by the way). Let me give you a recipe. Take two cans of hominy (one of the cheapest canned goods at Wal-Mart)...drain the water...

Stir in one 16 oz. can of cheap tomato sauce, and one medium chopped onion.

Put slices of cheap yellow American sliced cheese on top (or shredded cheddar if you prefer).

Bake at 350 for about 20 minutes (or microwave for about 5 to 8 minutes...depending on how powerful your microwave oven is).

Hominy casserole is one of my favorite Winter, Springtime, and Autumn dishes. It is cheap, tasty, and extremely filling. But, it's not so enjoyable in the Summer.

Benning: I forgot. If you make hominy casserole, be sure and buy the yellow hominy. White hominy tastes like...well, just make sure you buy yellow hominy.

I've heard the yellow has more flavor, Andy. I just may try this!

Benning: Wait! I was wrong. The Mrs. just told me that you use an 8 oz. can of cheap tomato sauce...not a 16 oz. And you have to saute' the chopped onion first. I've eaten it plenty, but never actually cooked it. (sigh)

Actually, I told her about my passing along the recipe and she's in the kitchen right now sauteing (don't know how to spell that) the onion...ummmmm!

I had eaten canned hominy since I was in a high chair, but I was an adult before I first tried it as grits. Not bad at all. I may be weird, but I like my grits mixed together with sausage.

Yum, I do believe that I am hungry now.

I like messing with the grits purists by putting preserves and such in 'em.

Shoprat: Yep, that's the way I prefer them. But butter will do in a pinch.

Jack: Have you eaten grits? Are they kosher?

Hehehee! I did one!

I remember my mother serving hominy when I was a kid and thinking that it was barely edible.

They just take longer to cook and have a more natural texture and flavor. Of course ther's always grits and cheese and shrimp and grits.

macbean...yessir! Nothing better than "cheese grits" on a cold morning.

I've never tried shrimp grits. I guess you use little cocktail shrimp, huh? How do you season it?

Mealie pap (really "mielie pap" in Afrikaans - or "uphuthu" in Zulu) can be cooked very stiff and eaten with sausage and gravy or more moist and eaten with milk and sugar as porridge. Hominy is called samp in S. Africa and is usually cooked with dried beans and served with gravy. Yum.

I just added some cooked chopped spinach to some grits, topped it with some shredded cheese, and it was pretty good. A healthy, righteous breakfast! LOL