Skye blogs at Midnight Blue. For some time she has followed the so-called Peace activists who protest against our troops at a weekly gathering in West Chester, Pennsylvania. She takes pictures and reports on the goings on there, and has helped to organize counter-demonstrations against these anti-American Moonbats (sorry, Van Helsing, but the name fits!) As Skye posted on the 22nd:

A beautiful day for a rally that turned ugly when a peace protester crossed the line from ugly remarks to violence.

Snarky retorts, name calling and mis characterizations by the CCPM are common place events in my 7 month documentary of this rally. Yesterday crossed the line, when I was struck twice by a peace protester. I can deal with all the above, but will NOT tolerate any form of violence against my person. I am consulting legal advice on this matter.

She emailed her story to Melanie Morgan, reporting:

I am saddened to report this:

Saturday around 12:10 PM, a member of the Chester County Peace Movement (CCPM) slapped a woman twice ( that would be me) who was videotaping an exchange between the two opposing groups. Police were called and an officer arrived at 12:15 PM and announced to the crowd that he was conducting an investigation.

The CCPM member was pointed out to police and the officer told the man to come forward and the man refused. The guy was totally uncooperative, belligerent and would not go with the officer. When he shoved the officer, the officer's partner took him to the ground to be handcuffed. The guy continued to resist while on the ground and the peace movement folks surrounded the officers, some as close as a foot or so away.

Photos at the bottom of http://picasaweb.google.com/rgc1946/WestChesterMarch222008 show this quite clearly.


I've prided myself in my professional conduct at this rally and to be struck twice by a 'peace' protester who has been present since the time I began covering this rally is truly disturbing.

Needless to say this tale is raising anger among Americans who actually love this country ( and a lot of bloggers) and believe in the Freedom of Speech. Gayle, at Dragon Lady's Den posted about this and linked to the full story at Marie's Two Cents. Marie has lots of links for your edification. I recommend you follow them and get up-to-date!

There is video and there are pictures, too. And, of course, the 'Peace' activists are lying about what happened and trying to spin it to their advantage. Traitors, Moonbats, and Liars. And they remain as violent as they ever were. 'Peace' to them is a weasel word they use to excuse every violent action they wish to take in their agenda of destroying Liberty and Freedom for Americans and the people of the entire world. 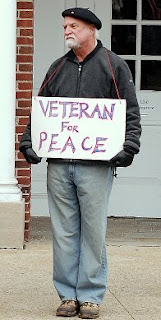 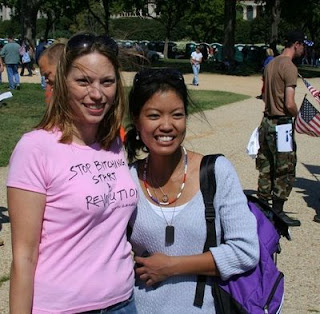 Skye, with Michelle Malkin. Looks like a threat, huh?

Don't ignore this! These are our enemies, Folks, not just a few misguided neighbors. These are not simply confused Democrats with a disagreement; these are Leftists who will do whatever they feel they must to win. And that means lies, distortions, and violence to get their way. Our enemies within our borders. As Van Helsing so rightly describes them: Moonbats!

Skye! We're with you!

To these idiots the words peace and socialism are interchangeable as are Capitalism and violence, hence whatever they do is peaceful and whatever we do is violent. It is strange what people can do with language and words.

Found your reference to this on Sister Toldjah; you've been linked.

I wish I had been there, Benning. I wear steel-tipped cowboy boots and would have kicked him in his cajones, dropping him like a fly! Of course I would probably have been hauled of to jail, but I promise you it would have been worth it. For anyone who may think I'm blowing wind here, it's something I've done before. Thankfully I wasn't hauled off to jail because the man accosted me in a parking lot and threatened me with a knife. He's the one who went to jail. Gotta love steel-tipped cowboy boots! :)

Thanks for the link!

Shoprat: In Communism, as well as Islam, lies are acceptable as long as they further the aims of Communism, or Islam. 'Newspeak' is one way to lie. And they have taken over te media and the education system to do the same thing: lie.

Dana: Thanks for the link!

Camo: Their line is whatever they want it to be. As long as it destroys what is good in the world.

I imagined you posting your comment and then saying, "Oh! And another thing ...!" LOL

Interesting that a person promoting peace would use violence...

Can you say hypocrite? I knew you could..

(apologies to the late Fred Rogers...)

I've always wondered why peace activists are so violent. LOL!

And you can quote me on that!