Democrats: Are The Men Leaving?

I noticed something while I was looking at the CNN primary results. Sister Toldjah thoughtfully provided links to these - I was not so inclined to stay up and watch the results trickle in - and I clicked on them.


The numbers, in CNN's Ohio results, for Hillary Clinton and Barack Obama, with nearly 100% of the precincts reporting are about what I expected. Clinton has 1,174,047 votes, and about 54% of the total, with Obama getting 942,174 votes, and about 44% of the total. No biggy there, but then CNN breaks down by the voters' gender which made me wonder. According to CNN, and I'm sure they're correct, 59% of the Democrats voting were women, 41% men. That seems a bit of a gap.

Okay, so maybe that's just how it works in Ohio. Using Sister Toldjah's links once more I opened the CNN Texas results. There Clinton took 1,433,998 votes and 51% of the total, while Obama grabbed 1,337,395 votes and 48% of the voters. Not a huge win for Clinton, but a win just the same. But look at the gender break down in Texas. 57% of the Democrat voters were female, 43% male. Again, that's quite a gap, isn't it?

Over on the Republican side, in Ohio it was 54% male and 46% female. A gap, yes, but not as large as in the Democrat primary. And in Texas, where I would expect the men-folk to amble on in to vote in big numbers, men were 51% of the Republican voters, the women were 49%. But not on the Democrat side.

Is this significant? Is it just these two large states? What about the other ones in the earlier primaries? Is this a trend over the primary season on the Democrat side? Because it sure looks a lot like the men are opting out. 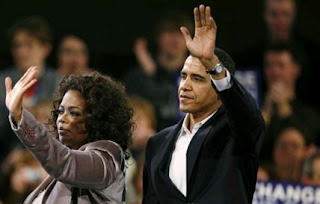 As Barack Obama has become more readily identifiable to Democrats and the general public, are they seeing that there's less to him than the media believes? Have the men in the Democrat party decided that the Oprahization of the Democrat Party has gone far enough? Obviously it's the women calling the shots. The Wussification of the Democrat Party has gone on since 1972. And now, for the first time, the Democrats face the prospect of having to decide between a black man whose main qualification for the office of the President is that most of his previous opponents have dropped out of his elections, and a woman whose cold, calculating ways have been scary since she was First Lady of Arkansas. The men in the Democrat Party - and here I must disqualify such panty-waists as Harry Reid - are watching their Progressive chickens come home to roost and it's a sobering sight. To maintain their bonafides as good Liberals they are being told that this is the future of the Democrat Party: Either castrating witches spewing vicious, obvious lies or addle-pated black men with soaring, empty rhetoric. And both given to promises of government programs that have failed around the world and brought untold suffering and death to millions. The Democrat Party is fully in the clutches of the Communist Light weenies. 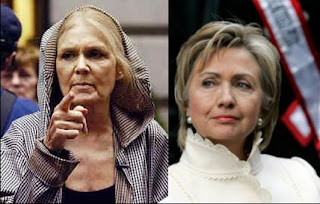 And, just for a moment, at least, it seems the men have dropped out. Could it be that the men remaining in the Democrat Party have come to their senses somewhat? Or is it something else? Is it that the women, in full Oprahization mode, or as energized Steinemists, have come into their own? The Nanny State is aborning in the breasts of these harridans. Either way it seem that the Democrats of Andrew Jackson and Harry Truman, of 'Scoop' Jackson and Robert Casey, is dead. The party which loves to include Thomas Jefferson in its pantheon has abandoned the principles of representative government, of freedom of speech, of responsibility and become the party of 'Unity'. Unity being complete agreement in thought and deed with the Party Cadres. It has become the party of 'Change'. Change being the abandonment of progress toward a prosperous and free future and the institution of the hopeless tenets of Socialism. The party has become the party of 'Hope'. Hope being defined now as being all things to all people no matter how much it costs and who must be forced to pay.

Perhaps I'm reading way too much into this. Could be. But how would you read these results, Folks? I'm curious.

'Nother Update: Here’s a sampling of the gender breakdown, from CNN (scroll down to “The Race So Far” and click on a state to see the numbers), of voting results of earlier primaries for the Democrats:

Sure looks like a bit of a trend to me. I wonder how it went in earlier election cycles.
Posted by benning at 5:58 AM

It sure has been a roller coaster. I would actually now like to get off this ride and down to some real politics. But with all these plastic people running around I doubt that will happen.

I just hope McCain will not let us down.

I actually believe Rudy, who is smart was asked to sit out those states because McCain's camp new people preferred Rudy. I am sure McCain promised him a position in his administration. What was hard for Rudy was to get over his extra marital affair. Too bad they were not as forgiving of him as Slick Willy - "That depends on what Is -is." Pffffffffffft!

I think Thompson, who I originally had liked just thought this was another acting gig and when he found out he would not be the star walked out. I never liked his wife Geri - too rougish to be first lady material.

Well, McCain it is. I like his wife a lot and his kids are neat from what I can tell. Sources told me that McCain is a real family man and is a prankster.

Like I said, I just hope he does not let us down.

It's the voters I'm worried about. Will they see what's coming in a Democrat Administration or will they belive the ridiculous promises they're being told?

I'm not surprised that men are not voting Dem. Socialism is the ultimate form of bloodless castration.

I think this outcome was a direct result of people crossing party lines to screw with the bigger commie, Obama.

I know I did, but come November I'll be back with the GOP, even if I'm not the happiest with them.

Patrick: That was short and pithy! Well said!

Gayle: You're right. It is something McCain must do in the campaign, but it's also something we have to keep doing, too. Educate people.

Brooke: It's entirely possible, and what a nice way to repay the nutroots for similar incitements, eh? McCain may not be our first choice, but he's who we got. Republicans and Independents have to get behind him.

That is a very interesting statistic. I'd like to see how it plays out in the year.

My definition of men doesn't include all males.