When the US was first powerful enough to throw its weight around it did so against the Spanish Empire. The US threw the Spaniards out of Cuba, Puerto Rico, and the Philippines. Although our nation had some "colonial" ambitions, the use of American force was actually a response to the call for intervention by ... the American people. Cuba returned to the Cuban people, Puerto Rico remained a protectorate of the US, and the Philippines were finally granted complete independence in 1946, on July 4th of that year. This stretching of US military muscles began in 1898, and with few exceptions, has resulted in the liberation of millions of people around the world. The cost to our nation, in treasure alone, has been astronomical. The cost to our nation in the lives of our best and brightest is incalculable.

The USA sacrifices its people and its treasure for the ideals of Freedom and Liberty, not for territory, prestige, or oil. Despite the cries of some that we are not the World's policemen, our nation has taken upon itself this very role. Whenever and wherever our national interests are threatened, or our national safety is at risk, we have shouldered the burden to go to war. We do not do so happily. We do so reluctantly. But with few exceptions we also do so to win.

Winning wars means the survival of a nation and its systems. Losing a war means the loss of sovereignty, the loss of treasure, the possible enslavement of the people, and the possible dismemberment of the nation itself. With GOD's help we have avoided those costs. But we have refused to shrink from a fight. Diplomacy only goes so far. Then you must surrender or fight. Americans have chosen the fight. Americans do not choose to surrender to tinpot dictators and thugs.

Today we mark the anniversary of the 2003 Invasion of Iraq - the Second Gulf War - and the defeat of Saddam Hussein and his pathological, Socialist, Baathist regime. To win the immediate War took lives and cost us treasure. However the alternative was, and is, too ugly to allow. Those who prattle on about the US invading Iraq for her oil, are ignorant of reality, or purposely deceptive. They should be ignored. We invaded Iraq following a decade of the Iraqi regime ignoring its responsibilities to the cease-fire agreements it made. Those agreements were the response to the Kuwait invasion by Iraq, the brutality and horror of its short occupation of Kuwait, and the eventual coalition of nations that fought Iraq and beat her.

In short, Iraq lied about its commitment to peace following the First Gulf War, refused to abide by the treaties it signed, funneled humanitarian aid to weapons and the building of palaces, harbored and trained terrorists, and refused to accept the U.N.-sponsored WMD inspections regimen. If, as some fools think, Hussein lied about Iraq's nuclear weapons research, as a way to seem more dangerous and powerful, then he miscalculated badly. If, as the blind may believe, no WMDs were ever discovered in Iraq following our invasion, then they are just as simple-minded as those who volunteered to be Human Shields against the US air attacks against Iraq. Nerve gas is a WMD. It was found in Iraq. Many other items of a similar nature have been found there. Case closed.

Of course the greatest difficulty America has faced in the Iraq War and the occupation following, has been the whining about the massive loss of American lives there. As if those who whine so ever cared about American military members anyway. They didn't, they don't, and they never will. Is the Iraq War over? Yes. The actual War is finished. Has been for awhile now. But this is a new type of war and we cannot simply declare ourselves the winners and amble home. Our existence in Iraq draws the terrorists. And that means we can kill them there, rather than fight them here.

But haven't we lost thousands and thousands of men and women in the War? How can we keep up with this huge loss?

The Iraq War, to date, has cost the US some 3,987 lives. That total runs from the invasion in 2003, to March of this year. Yes, that's a lot of dead Americans. The loss of a single American service member is a tragedy. 4,000 is unimaginable and dreadful. But Gateway Pundit managed to put it into perspective. And you should pay attention. Here are two of the graphics from his page:

Casualties in the entire Iraq War versus casualties in some major World War II battles. Click on the image for a larger version. 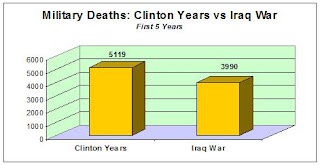 Think GWBush is killing off the military? Comparison of five years of military deaths during the Clinton Administration versus the Iraq War. Click on the image for a larger version.


I suggest you surf on over and read all of it. It will open your eyes if you still are under the influence of Nancy Pelosi and Harry Reid.

Today let us remember not just the dead in this war, but the injured and maimed, and all of those who left their loved ones, and their homes, and went to a war in an ugly place across the Ocean from us. They went to defend Freedom, serve Liberty, and liberate the enslaved people of Iraq. They didn't want to go to war. But they went. For Liberty. For Freedom. For us!

A Hat Tip to Gina Cobb who linked to Gateway Pundit!

My kids love your new back ground, Benning!

What a great post! It really puts things into perspective when all we hear from the MSM is doom and gloom.

Brooke: We can expect to hear more of that. And we won't be surprised, will we?

That was the only background I could find that was close to an Easter one. I was trying for something more Christian, but ...

Thank God that I have never been under the influence of either Nancy Pelosi or Harry Reid, Benning!

This is a wonderful post, but even with the graphs I will be very surprised if liberals wouldn't argue with it. You can show them proven facts and they will still blather away spouting the same old garbage. You are right... they must be ignored.

Have a great Easter weekend. I like your blog's background. :)

Gayle: That's because Leftists traffic in feelings not facts. Facts confuse and defeat them, but you cannot rationally argue with feelings. That's why it's best to ignore those who argue from the feelings they have. Invariably they are wrong.

That does put it in perspective.

Patrick beat me to almost the precise wording. It does indeed put it in perspective.

Good points, all. Better to fight them over there than here...that much of the strategy seems to be working thus far.

Hey benning, a Happy Easter to you (jelly beans? Not M&M's?).

A good post, these are the real issues in Iraq, regardless of the leftist traffic in feelings. There is a new kind of war, we should all be concerned even when we can't understand it. The area is a mess, much older wars are still being fought, more ancient than the media that cover it - and give America and Allies such prominent coverage.

Hey Benning..God bless all the troops..youre so right to remember them especially holiday time!..Holiday hugs to u my friend!:)

Wow what a long, boring blog from a religious conservative. You do realize that this war has not only taken the lives of 4,000 soliders but has destroyed the lives of 4,000 families back here in America. Someone's son or daughter; mother or father died in a that wasteland and for what? FREEDOM?! Is that your reason that you believe? You do know that n. Korea could bomb and destroy us at anytime. But how many oil fields can you find there? hmm funny how we invaded a country with many resources that we need, yet haven't tried to conquer the country that threatens us the most.

Ahh, well, you found me out. I am a Christian and I am a Conservative. As for having a long, boring post, well, I suppose that’s in the eyes of the reader. I certainly appreciate a fine, atheistic Leftist like yourself pointing out to me my boring quality of posting. So perhaps I can reply? Or will that be boring, too?

“You do realize that this war has not only taken the lives of 4,000 soliders but has destroyed the lives of 4,000 families back here in America. Someone's son or daughter; mother or father died in a that wasteland and for what? FREEDOM?! Is that your reason that you believe? ”

Yes, Freedom is one of the reasons, and I do believe that that is worthy of fighting for, and even dying for. The lives of those families have been impacted, and tragically. For you to say simply that they have been destroyed, is nonsense. The sacrifice their loved ones made, that they have made, is beyond recounting, but worth remembering and honoring, not used as a political ploy by Leftists who would destroy us and surrender to the next big thug to come along. Those families will go on. And yes, I would agree that Iraq is a bit of a wasteland. The Iraqis seem to like it.

”You do know that n. Korea could bomb and destroy us at anytime. But how many oil fields can you find there? Hmm, funny how we invaded a country with many resources that we need, yet haven't tried to conquer the country that threatens us the most.“

I agree that North Korea is a dangerous Communist State with the capacity to do damage to Japan, China, and much of Asia, not to mention South Korea. But that didn’t seem to matter one whit to the previous two Democrat Presidents. In fact North Korea was not even on their radar until GWB linked them as a part of the Axis of Evil. The Leftists were duly outraged by this. But not outraged when the Clinton Administration played footsy with them - or managed to send advanced computer missile technology to the Chinese. As for the many resources Iraq has that we wanted ... well, other than oil, what is there? And isn’t it odd that we did not take over the oil fields and start shipping oil back to the US? Isn’t that odd? Conquer? Well, I suppose a Leftist like ourself had little problem with a Socialist tyrant the likes of Saddam Hussein. But Iraqis did and so do I, and many other Americans as well. And why are we still in many places around the world? Like Bosnia? Did we conquer them? Is that what the Clintons promised us?

I do appreciate you taking time out of your busy day to leave a comment. All comments are welcome. Thanks for stopping by.