"Benning's War" - benning Could Use Some Help! 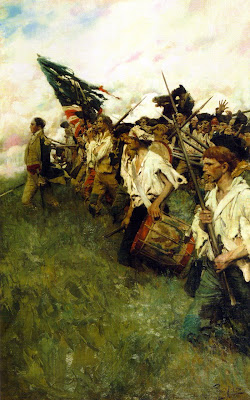 Recently I received the latest royalty check from my publisher for “Benning’s War”. It was for the princely sum of $1.80. One book sold in that quarter. An ebook, to be exact. So my sales have definitely plummeted. No wonder, since I don't promote it aside from the banner ad at the top of this blog, really. I do wish that a big publisher would discover it, or maybe even a motion picture producer. Imagine a producer reading it and thinking, "This would make a pretty good movie!" And I think it would make a great movie!


Yeah, that's the kind of thing that can turn a little-known - or unknown - book into a major hit. And, yeah, I think about that now and then. A bit of money coming in would certainly be helpful, y'know? But I didn't write "Benning's War" to make money. No, I wrote it to see if I could, to get a story out that was running around my mind, to do something that would allow me to stretch my creative muscles. The result was a finished book - a work of historical fiction - that satisfied those initial desires. And getting it published was wonderful. ePress-Online, a small, electronic publisher, did a great job assigning editors to my manuscript, walking me through the rewrite/editing process, and putting "Benning's War" together in a form that would sell. And then they ran it through Lulu.com to make it available in a print version. A short time ago my publisher worked out an arrangement to get Print-On-Demand books of theirs sold through Amazon.com Who could ask for more?


But I certainly want to see many thousands of copies of my book sold. And right now it looks as though "Benning's War" is sinking into oblivion. If you haven't bought a copy yet, please do! The story is one of the American Revolution. It tells the tale of a young man of western Virginia who went to war for the Independence of America. He is a veteran who finally experiences the utter horror of surviving the Massacre at the Waxhaws, fights and befriends Indians, and goes back to the War to help chase down and fight the British once more at Kings Mountain. There's adventure, action, some Romance - yes, I wrote a bit of romance into it - and a bit of actual history to keep you interested. I hope!


Some of you have bought the book, and I'm grateful! If you have, why not post a little review of the thing on your blog or website? Hey, it's a blog topic, if you're having a thin day blogging-wise. I'll even put up some graphics you can use for links. But, no, you certainly don't have to.


Just remember: "Benning's War" is still available in a print version as well as an e-book version. It will not go out of print. And the cover art was drawn by myself. *pats himself on the back, dislocating his arm* My mother recommends the book, as do some of my writing friends. I hope you do, too, or will buy a copy and spread the word. Wouldn't this be a good choice to give as a gift for the Independence Day coming up? Or maybe for Flag Day?


"Benning's War - A Novel of the American Revolution" is available at Lulu.com and Amazon.com Get your copie(s) today! And spread the word!

Here are some small graphics for you to use, if you like: 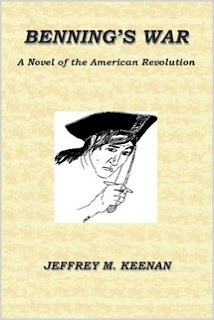 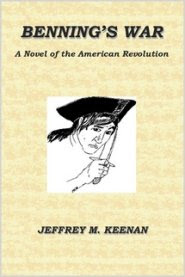 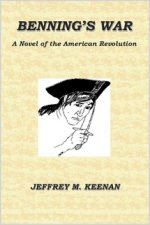 Perhaps you like the intricately detailed banner from the top of my blog? Here you are:

I'm not the best at reviews/essays, ect, but I'll be happy to stick a banner at my site!

I sold my (signed) copy on eBay.

Camo: I was about to ask what you lost on the deal! LOL

I'll post a link to it but probably won't have time to do a full-scale review. It is not best-seller material. It's too scholarly and it could even be used as a reference work - if it had a good index.

It's biggest weak spot as a popular novel is that it does not have a melodramatic enough beginning. If a beginning is too dry, it immediately puts off readers who don't like to work for their reward.

Remember how Shakespeare always began with a big bang: a shipwreck or a battle or a fierce argument or a grand dramatic entrance - lots of people, noise and drama?

Having Benning as the only character at the start (until the Indian attacks) doesn't get the emotions engaged soon enough.

I may be wrong because I am no expert on writing best-sellers. In fact I gave up writing fiction because I have no taste for "manufacturing" although I have thought of re-writing my "South African Stories" as a novel with more popular appeal; more melodrama because, like your book, it does not have that Shakespearean beginning and is too dry and factual.

Patrick: Any help is appreciated. I will keep your remarks in mind, too. You may well be right. Dang it!

Anyway, I posted this over a year ago; it didn't get much of a response, but having read the book, I think it would make a great movie!