From The Educated Shoprat comes this Quiz:

Putting your appointed path ahead of any inner conflicts, you make your own rules for the benefit of all.

If my life or death I can protect you, I will.

Aragorn is a character in the Middle-Earth universe. There is a description of him at TheOneRing.net. 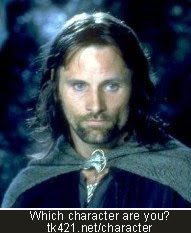 Thanks for the link.

This is interesting. We all need to evaluate ourselves once in a while.

I am Princess Leia...

I ended up being Gandalf and I want it known I have considerably less gray hair, though I like the comfy wardrobe. I'd like to think of myself as the Gandalf who put on a fireworks display for the hobbits, rather than the Gandalf who was wacked around by Christopher Lee.

I think I'd rather be Aragorn, though, because he got one of those cool Fellowship cape clasps that were going for over $100 when the movie came out.

Would have been nice to be a girl fantasy character...

Sisiggy: Since the Quiz didn't ask for gender, I guess it's based on all your other answers. Now If I'd ended up as Galadriel or Leia ... I might not have posted at all! LOL

In-spired: Was that a surprise? Imagine if you'd been tagged as Quark! Oy!

Shoprat: My pleasure! Thanks for the Quiz! :D

I am Aragorn as well. Could do worse. Happy New Year.


A venerated sage with vast power and knowledge, you gently guide forces around you while serving as a champion of the light.

Judge me by my size, do you? And well you should not - for my ally is the Force. And a powerful ally it is. Life creates it, makes it grow. Its energy surrounds us, and binds us. Luminescent beings are we, not this crude matter! You must feel the Force around you, everywhere.

A "Champion of the Light" you are? Cool!

An accomplished diplomat who can virtually do no wrong, you sometimes know it is best to rely on the council of others while holding the reins.

There are some words which I have known since I was a schoolboy. "With the first link, the chain is forged. The first speech censored, the first thought forbidden, the first freedom denied, chains us all irrevocably." These words were uttered by Judge Aaron Satie -- as a wisdom, and warning. The first time any man's freedom is trodden on, we're all damaged.

Jean-Luc is a character in the Star Trek universe. This The Next Generation fan site has an outline of his career.