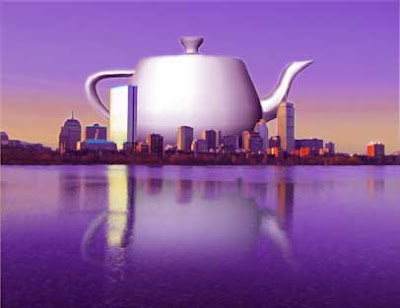 On the night of December 16, 1773, a large group of Boston colonists, self-styled as the "Sons of Liberty" staged the first openly rebellious act of the colonies against Britain. Docked in the Boston Harbor were three ships, the Beaver, the Eleanor, and the Dartmouth, laden with a cargo of tea. John Hancock, a Boston colonist and tradesman who smuggled tea in protest of British tea taxes, had organized a boycott of the British East India Company's tea. 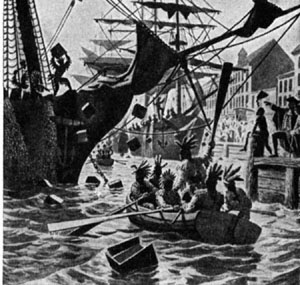 That's right! This is Boston Tea Party Day! Did you celebrate? Have a cuppa? Not for me the thin tea of the damnable British! No! I had coffee! Granted, I don't like tea anyway, so it was no sacrifice. But the principle! Dagnabbit!

In 1773, the British passed the Tea Act, which granted the Company the right to sell the tea to British colonies without the burden of the colonial tax, allowing the Company to undercut both smugglers and lawful merchants. By bottoming out prices on the "legitimate" East India Company tea and adding only a small levy, the British government assumed that the colonists would submit to the taxation in order to obtain their coveted tea.

Americans have never been understood, and continue to be misunderstood by Europeans. And the rest of the world, too, for that matter. And most denizens of the political Left have no understanding of Americans or America. And the British had not a single clue, when it came to trying to squeeze taxes from their colonies in North America. 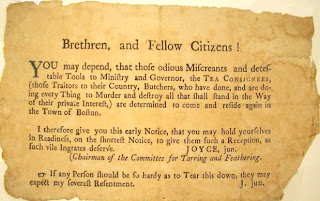 Most colonies refused the tea, but Massachusetts Royal Governor Thomas Hutchinson infuriated Bostonians by his order to allow the ships to dock with the Darjeeling and that the duty be paid by the deadline, December 16. Sam Adams organized roaming mobs and threatened violence. Adams held a public meeting on the day of the deadline at Old South Meeting House where colonists resolved that the tea would be sent back to England. Surprisingly, the owner of the Dartmouth agreed, but the British refused to let him turn back, and prepared to seize the ship.

Always with the Elites it is a matter of Faith that the rabble - meaning most of us! - will come around to their way of thinking. Always they are badly surprised when we decide we don't accept their version of events and go our own way. After all, it wasn't the cowed masses of Europe that created America, but the unsatisfied, the adventurous, the questioning who traded their established way of life, chanced their very lives on the wild waters of the Atlantic, and made their new homes and lives in the vast wilderness of North America. 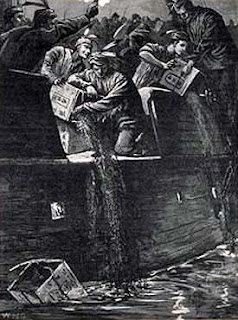 The Sons of Liberty, dressed as Mohawk Indians and led by Sam Adams, boarded the three British ships, hacked open 342 chests of tea, and dumped forty-five tons of British tea into the Boston Harbor. This act of rebellion paved the way for further acts agitating against oppressive British rule and the Intolerable Acts passed in response to the Tea Party, and led eventually to the American Revolution. 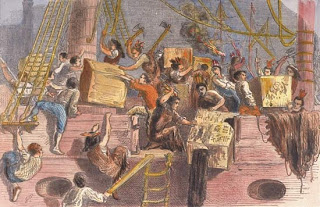 We Americans were created in rebellion - rebellion that predated the Revolution. It predated the French and Indian War that the British were so eager to have us pay for. Used to the meek, uneducated of their Mother country, the perfumed prisses of Parliament neither understood, nor tried to understand, the people they were trying to extort money from. The Tea Act was one of their last gasps at such nonsense before outright war commenced. And the Boston Tea Party was our first shot at the tyranny of the British Lion.

I often think that we should have our own little tea party, considering the burden of taxes upon the People.

Should we use tea, or something else highly taxed?

Everyday is Tea Party Day for me. I drink at least 6 cups a day.

See as how I loathe tea (dried leaves with water - - yuck) I'd doubly enjoy such a party. Down with big government and undrinkable stuff dumped into the ocean.

I think you all exhibit symptoms of having celebrated!

A cup of something warm sounds quite good to me.

Good old Massachusetts, setting the example just like the paper of record, the New York Times.

Green tea and coffee are the grease that makes the American economy and military go. Trying to up the price on such would indeed cause blowback.

Ahhh, but they sparked something. Mass. had extremists then, extremists yearning for Liberty - or what they thought of as Liberty. The Grey Lady set the example of Leftist servility. What a record, eh?