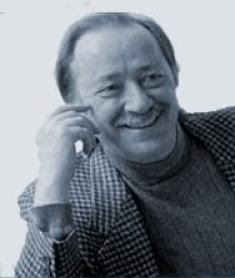 Funny how you can find things on the Web when you aren't looking for them. A case in point is the artist known as "Pino". His name is Pino Dangelico, and he comes originally from Bari, Italy. Beginning his commercial career as the painter of book covers, he was able to move beyond that very lucrative profession to simply painting, as he wished. I really enjoy the art of Pino, and I think you might, too. 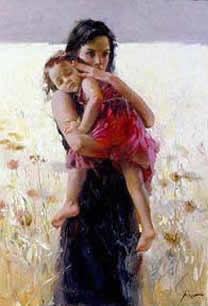 Harry paid close attention to the fundamental aspects of visual storytelling. Focused points of interest were rendered with more informational detail, crisp edges for definition, and sharp contrast of value and hue, lightest lights against the darkest darks, for example. And although the element of detail (as in an object that has been rendered exactly as it appears in life), seems realistically portrayed in Harry’s paintings, it is a looser more impressionistic representation. This is created with, among other things, very deft and confident brush strokes or, as Harry called it “painting dexterity.” It reads like detail, but is in fact not. 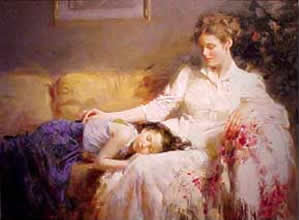 Well, Pino pains in the style of Loose Realism, and it's a very nice technique, with wonderful results. Pino Giclee.com has this to say about Pino:

Born on the cusp of a defining world war in Europe [November, 1939], Pino Dangelico's childhood visual memories are those of women left behind to keep the home fires burning. His mother, aunts, grandmothers and cousins became a universe of attractive Italian women in aprons, maintaining domestic tranquility in very uncertain times. Bathed in the Adriatic light of his native Bari, these figures would later infuse the romantic canvases of Pino that speak so softly to the hearts of Europeans and Americans alike today. 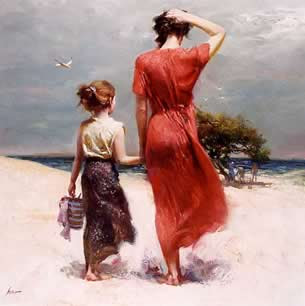 Growing up with the faded glories of Renaissance art and architecture at his doorstep Pino was in tune with the energies of a new era and, despite his phenomenal success as one of the leading European illustrators of all time, he wanted to be closer to the dynamic art center of the world, New York. He also wanted to release his art from the restrictions of others and be free to explore new avenues that had been opened by the abstract expressionists of the late 1940's and early 1950's. A visit to Manhattan in 1971 exposed Pino to the exciting synergy of the United States and the museums of New York opened his eyes to the rich history of figure painting in America. In 1978 he returned with his wife Chiara, seven-year- old daughter, Paola and five-year-old son, Massimo. Unable to escape his commercial success in Europe, Pino soon became the highest paid American illustrator with over 3,000 book covers, movie posters and magazine illustrations to his credit. More importantly, his unique style not only dominated the market; it also exerted a profound influence on other artists' work from 1980 to 1995. 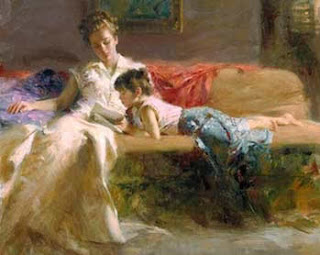 Eager to leave illustration behind and to begin stretching the envelope of fine art with his fresh figural concepts and brilliant brushwork, Pino began showing his canvases to galleries. In 1992 he contacted one of the major galleries in Scottsdale, Arizona, The May Gallery, and sent five paintings which were well received. Since then his paintings have appeared in Morris & Whiteside Gallery in Hilton Head Island, South Carolina and Stuart Johnson's Settler's West Gallery in Tucson, Arizona. Pino has been invited to make several appearances on major TV networks and has been interviewed in national and international journals. With the immediate success among collectors, Pino began to distill over forty years of training and experience into each new painting. Combining all that he has learned from formal training and assimilated from observing the great masters, Pino has evolved a mature style that is both distinctive and deeply rooted in art history.

Now, maybe this isn't "high" art. Perhaps it is too accessible, too easy to understand and enjoy. Unlike the spatterings of Jackson Pollack, or the bizarre renderings of the celebrated Pablo Picasso, the works of such artists as Pino, or Harry Anderson, or Maxfield Parrish, among others, do what Art is supposed to do, as opposed to what the Art "Experts" and "Critics" want you to think Artists should do. It presents beauty, a story, a vision of something they see, for you to appreciate. No need, when looking at a Pino work, to ask, "What is it?" or check the label on the frame. 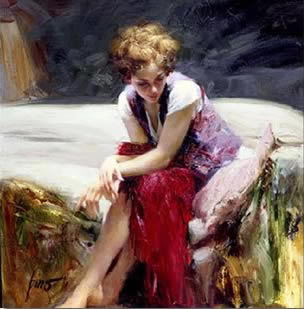 By the way, while wandering the Web, hunting for Pino prints, among others, to use here, I kept running into the word Giclée. I finally grasped that it's a technique for making prints. So I figured, why not search the word and make sure. From Wikipedia:

Giclée, commonly pronounced "zhee-clay," is an invented name for the process of making fine art prints from a digital source using ink-jet printing. The word “giclée”, from the French language word "gicleur" meaning "nozzle", was created by Jack Duganne, a print maker working in the field, to represent any inkjet based digital print used as fine art. The intent of that name was to distinguish commonly known industrial "Iris proofs" from the type of fine art prints artists were producing on those same types of printers. The name was originally applied to fine art prints created on Iris printers in a process invented in the early 1990s but has since come to mean any high quality ink-jet print.

Good stuff! And that's coming from a former art major...

I love the way he uses the light. Wish I had that kind of talent!

Now, that's my kind of art. I'd never heard of him before.

You always find the most beautiful art, particularly of mothers and daughters. :D