Seventy-five years ago the franchise for a National Football League Team was purchased by Bert Bell and Lud Wray for the Philadelphia, Pennsylvania area. The entry fee was a hefty $2,500.00 and the Great Depression was going strong. Two seasons before - midway through the 1931 season - the previous franchise-holder - the Frankford Yellow Jackets - had gone bankrupt and could not finish the season. Their final game: a win over the Chicago Bears in Chicago, something a Philadelphia football team would not accomplish again until 1999.

Some thought that the new club, named the Eagles in honor of the New Deal programs of F.D.R. was merely a renaming, under new owners, of the Yellow Jackets. That is not the case, though it's a sort of romantic view, since the Yellow Jackets began their existence in 1899 as the Frankford Athletic Association.

No, what Bell and Wray purchased was the right to field a new football team. And they did.

This new team adopted the colors of the City of Philadelphia: Yellow and Blue which commemorate the original Swedish colonization of Philadelphia. Odd colors for an Eagle, but I suppose there was a bit of P.R. involved. So this new NFL team took the field and promptly looked liked losers, which they have been for most of the past seventy-five years. A tough thing to be in a city that is extremely tough on its sports teams. "Boo Birds" live in Philly, and have spread from there. But the soul and spirit of the Boo Birds resides in Philly. You ain't heard Boo Birds unless you've attended or watched a game in Philadelphia.

How did I get to this post? I went in to work early Sunday, and got home in time to watch my adopted football team - the Tampa Bay Buccaneers - play the final half of their game. They looked good and won convincingly. At times the station would update scores from around the NFL, and one of those was the Philly game. I heard the score - 42 to 21 - and figured the game must be over. Good for the Eagles, right? No, it was late in the second quarter! What? I turned my head to see big men dressed in yellow and blue, traipsing down the field! I had to guess that the odd colors had scared the opposing team. The final score was 56 to 21, and the Eagles won. But, what the hell was the deal with the ugly uniforms?

Ahhhh, the explanation came that this was the team's 75th Anniversary Celebration! Ohhhh, that explains the bad taste! Now, had they been serious about this "throwback" game, they would have supplied old-style uniforms with leather pads, and helmets, and no facemasks. But, no. Only the colors were changed, and the impressive Eagle wings that have adorned the helmets for decades were back to the original shape. Here's what the celebration uniforms look like. 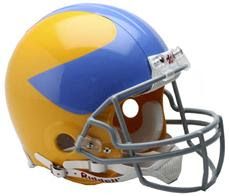 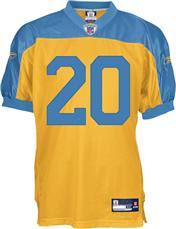 Okay, maybe they're not the ugliest football uniforms of modern times, but they aren't imposing. They're about as impressive as the Orange Creamsicle uniforms of the old Tampa Bay Buccaneers. Yech! 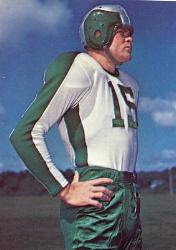 Now here's what one of the greatest players of all-time looked like in his Eagle's uniform in 1950. This is Steve Van Buren, a Hall of Famer, who retired as the all-time yardage leader among NFL players. He came before the magic and power of Jim Brown, but Van Buren was an incredible running back. The best of his time. But then, he wasn't playing in blue and yellow! 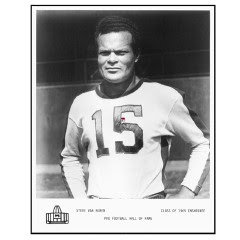 Look at the picture. What's missing? No facemask, huh? By the time of this picture the Eagles had chosen Kelly Green as their color, and would keep it for a long time.

Like other teams in the NFL the Eagles logo has changed as have the colors. Now the green is a dark shade called "Midnight Green", along with white, silver, and black. And you have to admit that on the right player the uniform is imposing. And the logo is nice, too. But after all, seventy-five years have gone by. Some things have been bound to change. Sadly, for Philly fans, the heady days of Championship Football has not returned since the 1948 - 1950 years, or the 1960 NFL Champs who beat the Vince Lombardi-coached Green Bay Packers. No, they have become contenders. Bridesmaids, really. But we Philly fans do not give up. This is the year! (even if it isn't)

But please!!!! Don't bring back the sissy colors again! Please!!!!! 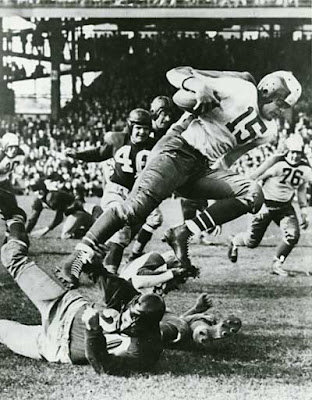 How they used to play the game! Van Buren on the run!

Hey, if the uniforms had something to do with that 35 point win, I say keep 'em!!!